Recently, 3D Systems announced that they were going to abandon the 3D printing consumer/prosumer market. They gave several reasons, few of which sounded very convincing or reasonable to me, but then it’s not my company, so I don’t really care. But I do find it a little more than ironic that just as 3D Systems is about to exit, some truly innovative and creative machines are about to be introduced. For some reason, something about this reminds me of IBM and the PC2.

One such innovative company is a small printer firm that goes by the very un-Korean name of “Former’s Farm” and was founded in May 2013. For most of their history, they have operated in a manner that can only be described as “stealth mode”. To operate, they have been selling a very high quality, mostly hand-built, FDM 3D printer called the “Sprout”.

They now seem to be ready to step out of the shadows and take their place on the world stage…in a manner of speaking. First they introduced the “Sprout Mini,” designed for the dental market and just last month they formed a partnership with Materialise to improve their 3D printing software. 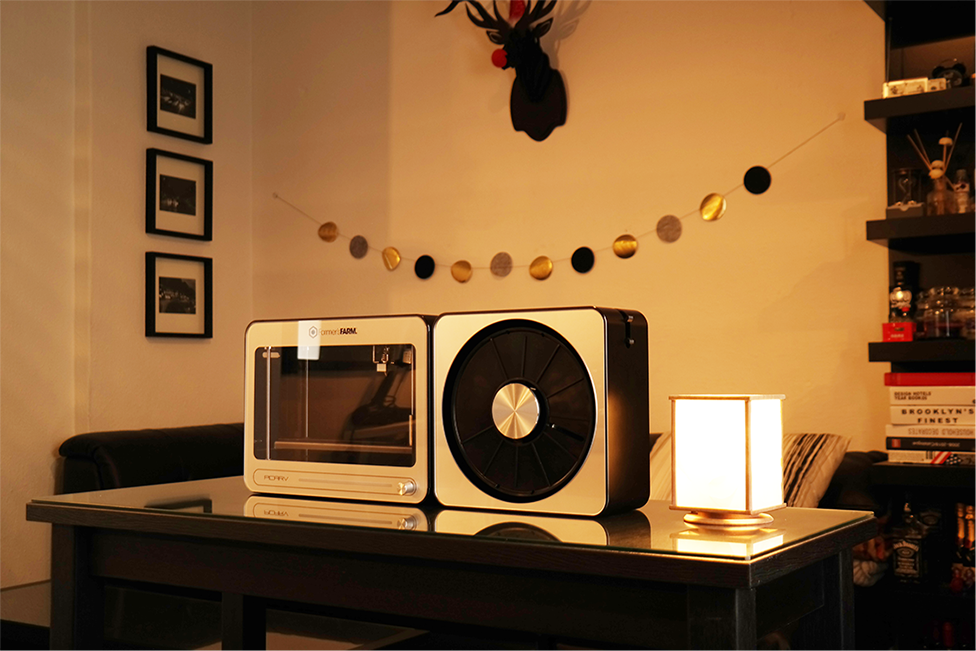 Former’s Farm is attending the upcoming CES 2016 next month, and wait until you see what they are bringing! They will introduce two new machines, and these do not look like your run-of-the-mill 3D printers, nor do they operate like them. To be quite honest, they look like they were designed by Apple… or, at the very least, deliberately designed to complement your Apple Mac. 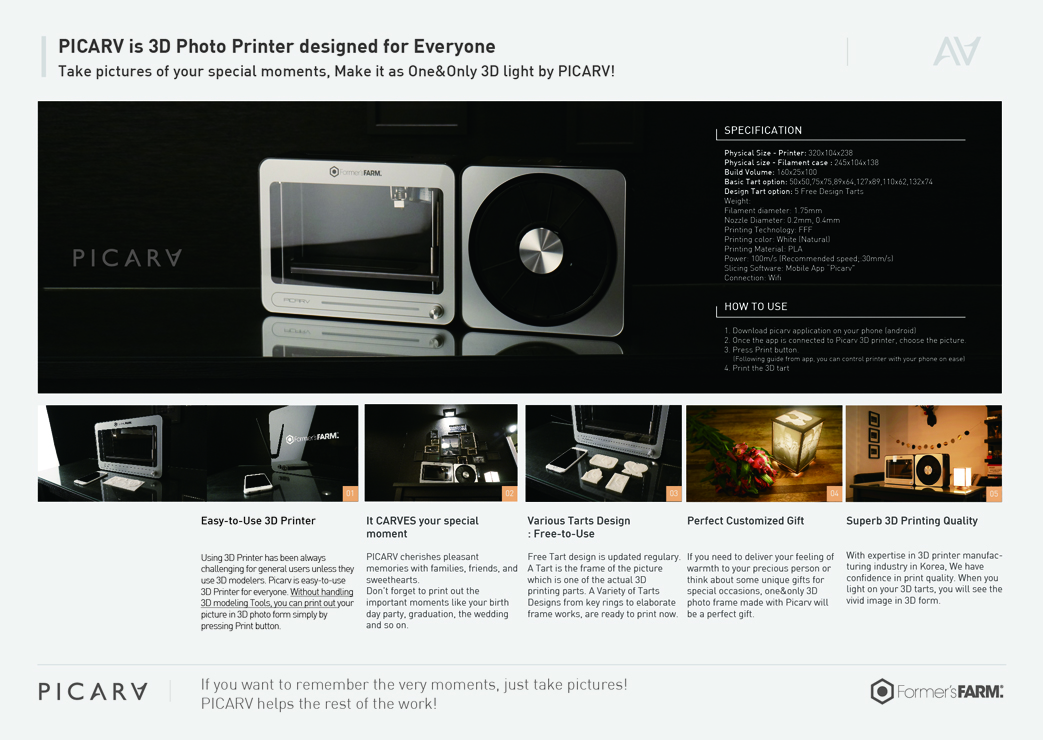 The first one is called the “Picarv” printer. What makes it interesting is that it is designed as a Photo Lithophane printer. It seems to be designed to make Lithophanes as easy to print for an average user as digital photographs are on your home inkjet printer. The printer works with a smartphone app, which controls the printing process, and works as follows: first you download the app, once the app connects to the printer, you select the photo you want printed, choose the tart (lithophane frame), and hit “print”. That’s it. I do not know if it can be used for more “traditional” 3D printing, but its size seems to indicate that it could be. 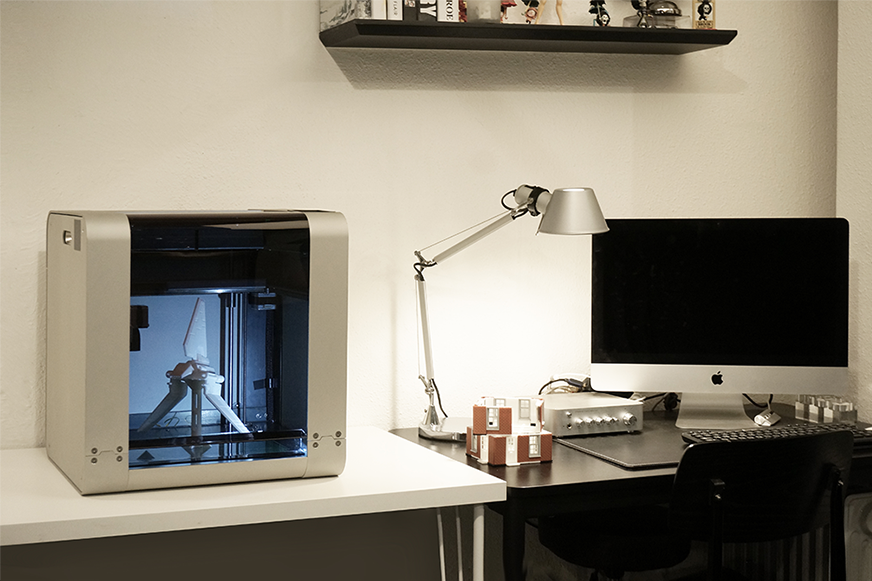 The second machine is called the “Olmo” which is designed for more serious Makers. And, while it is a very attractive machine, it is more than just pretty. Former’s Farm is one of the first 3D printer companies to use the innate advantages of 3D printers to improve 3D printers. What they have done is invented a new type of extruder nozzle unlike any other I have seen or heard about. 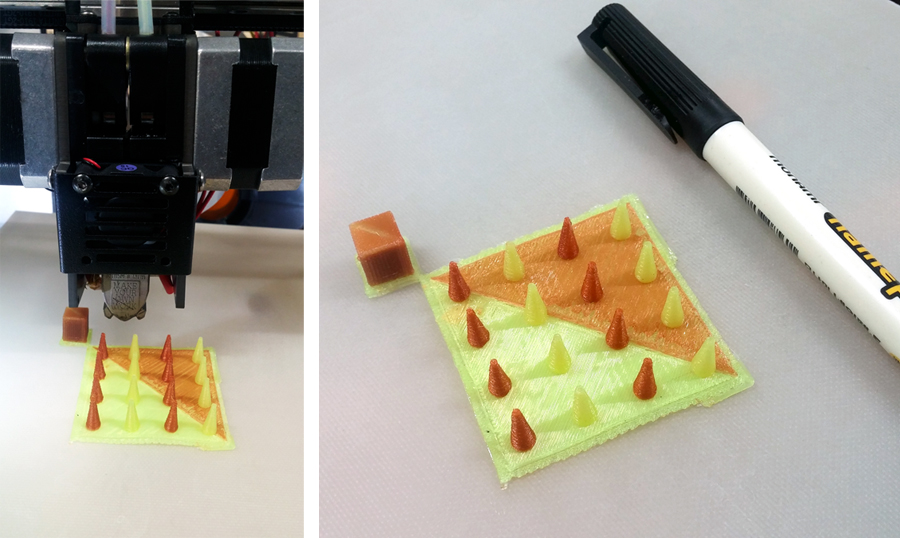 Their new nozzle uses two separate filaments at the same time, keeping the two plastics separate, or mixing them, depending on the user’s needs. While we have seen multi-filament extruders before, even ones that used a single hotend, this one appears different. According to Mr. JiHuhn Kang, the company’s CTO, they have found a way of using two different filaments, melting them reliability, mixing them (or not) accurately, while eliminating the oozing and unintended cross-contamination that has plagued previous designs. Mr. Kang told me that his original idea was to be able to print both build material and support material from the same nozzle…which he can now do.

I know I am doing a terrible job of describing it, but trust me…it is so cool…you have to see it to appreciate it. Lightweight, small, solid, and versatile. So, if you’re going to CES this January, be SURE to stop by Former’s Farm’s booth and take a look. I am sure you will be as impressed as I am. And now that they have decided to enter the mainstream market, I am certain we will be hearing and seeing a lot more from this (for now) little company. Their website (in Korean) is at: formersfarm.com.