As Hod Lipson talks to 3DPI about the possibilities for 3D printing a robot that can walk right off of the print bed, MIT has brought the idea into reality by 3D printing a functioning robot in a single step. Perhaps more unique than this amazing feat was that this was done using a commercially available printer through the 3D printing of solid and liquid materials at once. 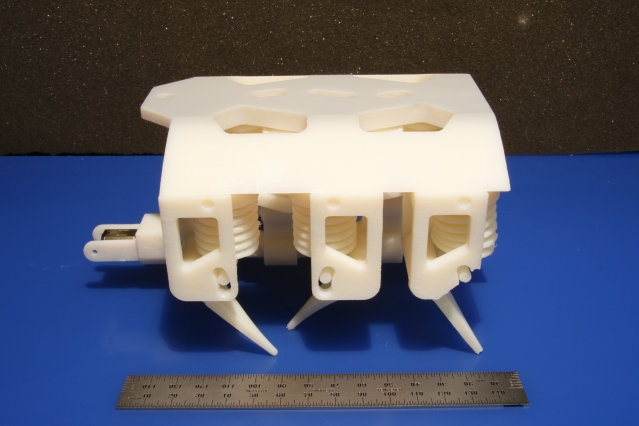 In a recent paper, the team from MIT’s Computer Science and Artificial Intelligence Laboratory detail their work to 3D print a small, six-legged robot that uses hydraulic pumps to move. CSAIL Director Daniela Rus, co-author on the paper, explains to MIT News, “Our approach, which we call ‘printable hydraulics,’ is a step towards the rapid fabrication of functional machines. All you have to do is stick in a battery and motor, and you have a robot that can practically walk right out of the printer.”

The key to making the robot move was 3D printing the 12 hyrdaulic pumps within its body. To do so, the team turned to a Stratasys Objet260 Connex system, capable of 3D printing multiple materials in a single build. Relying on the machine’s UV-reactive resin and a non-curing liquid cleaner, the team was able to rig the machine to 3D print the hyraulic parts so that they could fill with the liquid material.  Co-author and MIT postdoc Robert MacCurdy, says, “Inkjet printing lets us have eight different print-heads deposit different materials adjacent to one another, all at the same time. It gives us very fine control of material placement, which is what allows us to print complex, pre-filled fluidic channels.”

After 22 hours of printing, the resulting hexapod is just 1.5 pound in weight and six inches long. Though not 3D printed, a DC motor and battery were inserted into the completed robot upon completion.  The motor turns a crankshaft, which directs fluid into the bot’s legs. Bellows built into the hexapod translates fluid pressure into mechanical force to drive it forward.  Further demonstrating the possibilities of the design, the team 3D printed a silicone hand with hyrdaulic fingers.

MacCurdy adds that the template for these projects can be expanded for new designs, hoping for a future in which necessary robots can be 3D printed on-demand for specific scenarios, such as disaster relief at nuclear sites. He says, “If you have a crawling robot that you want to have step over something larger, you can tweak the design in a matter of minutes. In the future, the system will hardly need any human input at all; you can just press a few buttons, and it will automatically make the changes.”

Hod Lipson actually relayed his own thoughts on the project to MIT News, saying, “The CSAIL team has taken multi-material printing to the next level by printing not just a combination of different polymers or a mixture of metals, but essentially a self-contained working hydraulic system. It’s an important step towards the next big phase of 3-D printing — moving from printing passive parts to printing active integrated systems.”

The limitations of the process are, in many ways, linked to the printing process. Though the paper describes the ability to conduct similar research with other machines, such as SLA printers, inkjet 3D printing is seen as the best way to print such multimaterial designs. As the technology improves, however, so will the process overall.