MakerBot and Microsoft represent a partnership meant to bring the potential and awareness of 3D printing to a large scale audience with an in-store presence across the United States at 41 different Microsoft store locations. It is hoped that the promotion will bring bodies through the doors and educate an established Microsoft customer base as well as provide a physical space to explore and play with the MakerBot for those familiar with 3D printing. Both partners are hoping participants provide feedback on Facebook, Google+, Instagram, Vine, and Twitter (the pop culture hubs of social media). There are stores covering most of the country and it will be interesting to see the myriad of products customers can display especially if they are tinged with cultural markings from Hawaii to Kansas and Oregon, just to name a few. The MakerBot Experience has been ongoing since August 18th and offers a bullet-point program. 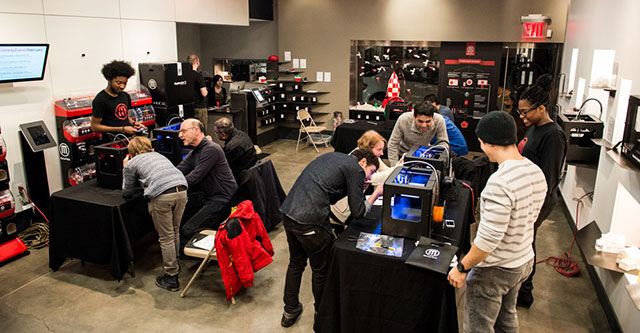 The first two points relate to purchasing: the Makerbot Replicator 2 3D Printer and a variety of MakerBot PLA filament colours. If you can attend soon, there are 3D printed giveaways, but even if they disappear faster than homemade cookies at a picinic, there are other promotions. Paramount for 3D printing novices will be tutorials for the MakerBot Replicator 2 and the plug-and-play integration with Windows 8.1. And for more hands-on experience, each store promises to have curated 3D printed displays to explore. These all act as a public service announcement by Microsoft and MakerBot informing those within earshot of the advertised New Industrial Revolution that is 3D printing. 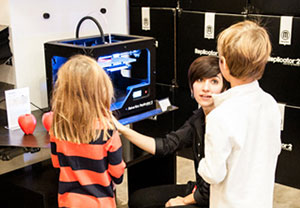 What this promotion does for 3D printing can best be seen in the partnership. Microsoft is now an established name in the psyche of anyone using modern technology, even if it is not the brand used. By connecting with Microsoft at their retail stores, MakerBot makes another move to establish it and 3D printing in line with expected devices. Even though the analogy is far from perfect, it is akin to polos by Nike or smartphones by Google; a product attached to a familiar and well-established brand connecting to new and old customers. A revolution is only successful in its prevelance and lasting impact, therefore both MakerBot and Microsoft can help usher in their promoted New Industrial Revolution by making 3D printing as widespread and available as possible.