This year, one clear leitmotif at Euromold was the presence of low-cost laser sintering systems, something that had never happened before. This was combined with the loud absence of EOS, probably the largest SLS 3D printer manufacturer in the world, and only a partial presence of 3D Systems, the first to introduce SLS technology, represented by a local distributor.

Eurmold is going through a big shift and it is not clear what the future holds for this once powerful manufacturing show. Nevertheless those who visited this year had the chance to see many world premiers. And the presence of the first three SLS 3D printers to hit the market since the SLS patent expiration last Febraury 2014 was probably worth the trip (it definitely was for me). 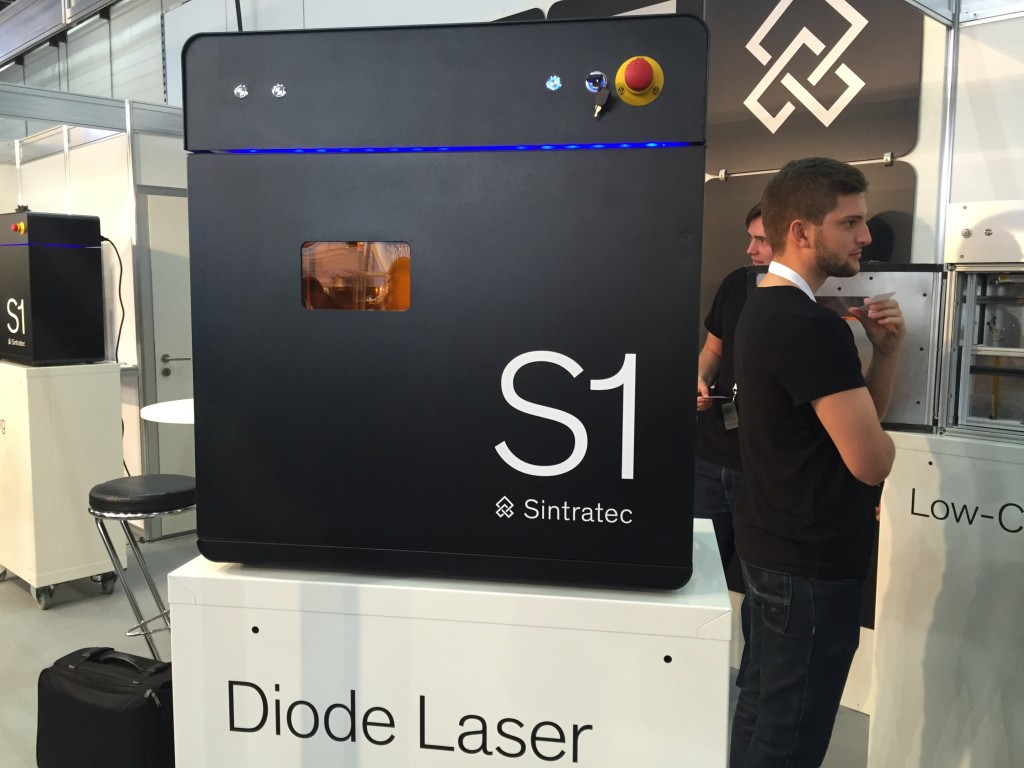 The first company I visited was Sintratec, which is based in Zurich, Switzerland, and was founded by students from the local ETH University, one of the top technical universities in the world. Sintratec first hit the market with a DIY SLS kit on sale for as little as €5,000. Its new system, the S1, is going on sale for €9,000 and introduces several technologies that carefully regulate heat distribution throughout the print chamber and, thus, grant very high definition and quality to the printed models.

The downside is that, at this point, from what I could see, the S1’s laser is only capable of producing black colored nylon pieces, which could be indicative of the fact that the laser used is not powerful enough to melt white colored nylon and needs the dark color to generate enough heat in the particles. The other downside is that I did not actually see the machine working, other than a projection of the light on the printing plane. 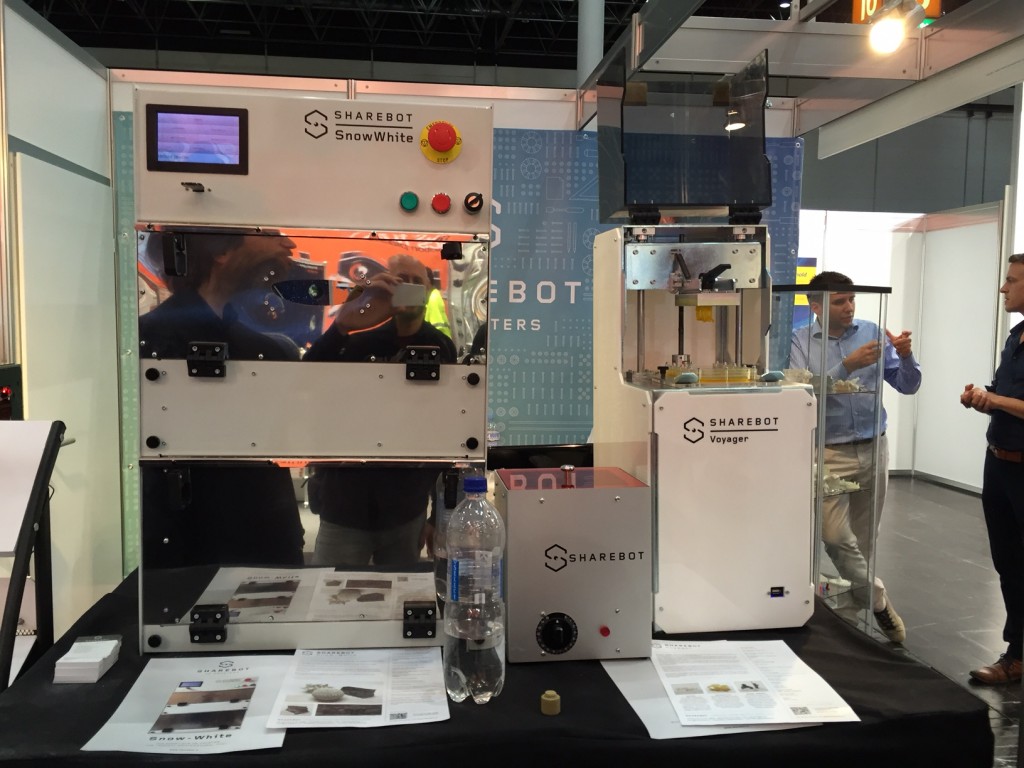 The second company I visited was Sharebot, the Italian 3D printer manufacturer that has been able to launch several FFF models, one DLP model, and a low cost SLS model, which was first presented last year. This was topped off by this year’s news: a large-sized, low-cost SLA 3D printer. Getting back to the SLS, it is now available for beta pre-orders and it is the more expensive among the low-cost SLS 3D printers, coming in at well above €30,000 (still much less than the most affordable, high-end SLS system)

The good news is that it can easily print white nylon parts, and that, in fact, it was printing almost constantly during the show. In fact it has already been tested for several materials, including glass-charged, carbon fiber-charged and graphene-charged PA12. A recent video even showed the machine’s capabilities with a yet unrevelead, very elastic TPU-like material. These materials, however, can only be used to make products as large as 100x100x100 mm. 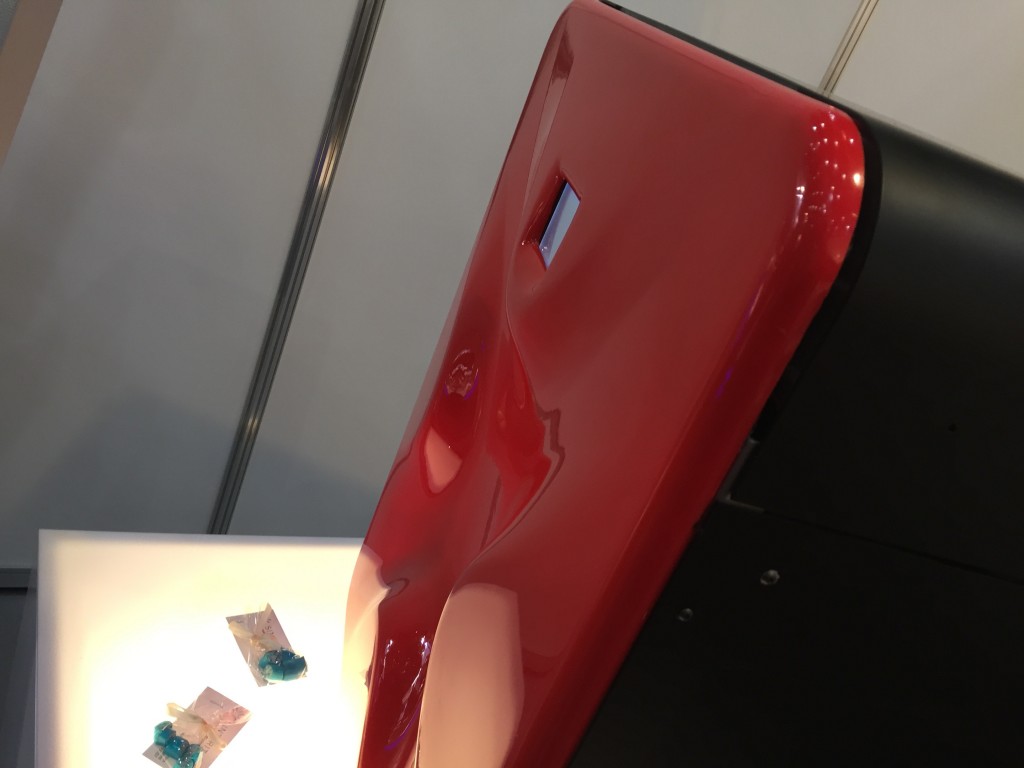 The final low-cost machine was the Lisa from Poland-based Sinterit. This is the most affordable of the assemble machines, coming in at just €7,000. The company’s founders revealed that they already have orders for as many as 20 machines, and that deliveries are set to begin next March. The Lisa also has the best looking exterior shape of the bunch, with a curvy, bright red front cover.

The downside here is that the model we saw looks like a unique prototype and it remains to be seen if Sinterit actually has the capability of scaling production. Also, at this point, it can mostly 3D print dark parts, although the 5 watt laser should be able to 3D print white nylon and the team is actually already at work on a pink-colored nylon material. The models do look a little powdery. but the definition and mechanical properties seem quite high and the maximum size could go up to 130x170x130 mm. The final downside is that there was no window on the machine, so we could not see it working, although the front screen showed a video of the sintering process going on as seen from above the plane. 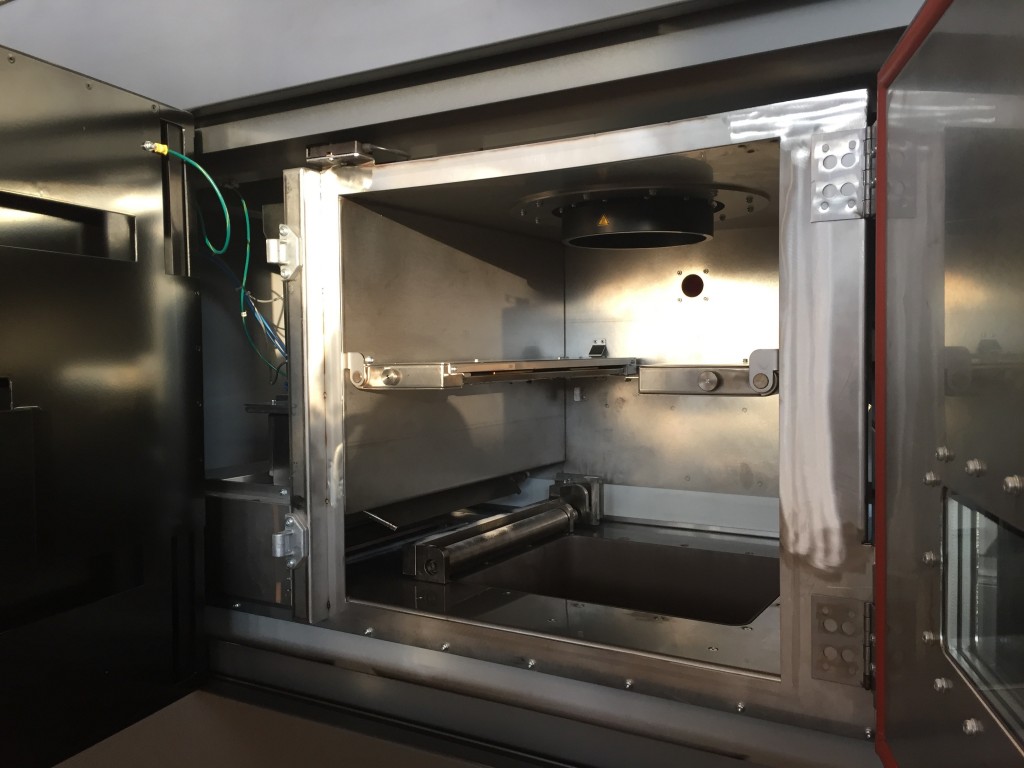 In the evening, I went with 3D Systems and a few of its distributors and customers to visit a local service with several 3D printers on display. There I got to get up close with the ProX 500 SLS 3D printer, one of the largest in 3D Systems’ arsenal. The technology is the same… a laser melting a fine powder, creating objects layer after layer. The price, however, certainly is not and neither is the size and mechanical components that make it up. It remains to be seen if the American giant, along with its main competitor, EOS, will find it more convenient to lower their prices or push the development of their technology. And the recent news about Prodways and Farsoon may make things even more interesting. Either way, end users can benefit from this steep increase in competition.