Camtek is provoking excitement in the stock markets, probably even more than in its potential customer markets right now. The mention of the term ‘3D printing’ earns publicly listed companies almost instant share success right now. But what is the reality regarding Camtek? Whilst little information on Camtek’s breakthrough industrial circuit 3D printing technology currently exists – although 3DPI will be seeking an interview soon – the company itself is available for analysis.

The company was founded in 1986 with its headquarters in Israel. Israel is also part-home to Stratasys, one of the world’s duo of 3D printing giants. The company is relatively small, at some <500 employees, but with a global presence from 2,800 installations in 34 countries.

Financially, the company has a $90M market cap. Its financials can be summarised as:

Camtek shares closed at USD$1.89 on November 7th, the day the company announced third-quarter earnings. They closed at $2.65 last Friday and are trading up at around 80% on Monday at an impressive $4.79. Beware a short-term bubble here… 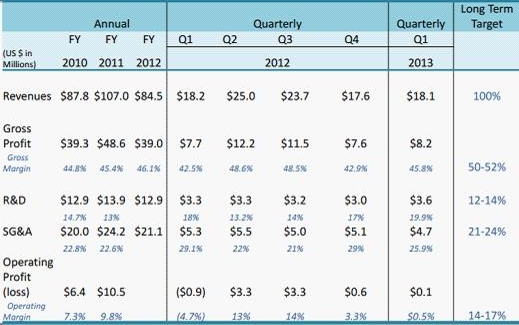 Camtek CEO, Roy Porat, said of the company’s revelation about its foray into 3D printing that: “I think it will have a big impact on the revenue line in the near future, no doubt in my mind again as I’ve said I think the big part of the risk element is behind us in terms of the technology, and we’re few weeks from putting tooling to a customer. And I think the next milestone is really meeting this milestone, which will be few weeks from now. So by next quarter call, I hope I’ll have more interesting update. And I think we’ll take it once step at a time and I don’t think I want to go into details right now of expected revenues in 2014, a little bit too early for us to estimate.“

Camtek sees the market for its printers as $600 to $700 million (third-quarter revenues totaled less than $22 million) and the company expects to put the device in a customer’s hands in a few weeks for testing.

Porat summaried the prospects from his perspective as: “Although 3D printing is a technology out there already, but 3D printing for our application, which is a functional 3D printing, has not been done yet in the world. So as far as I know we’re the first one.”