SoCal 3D printer manufacturer AirWolf 3D’s latest desktop 3D printer made its big debut last week at the Paris 3D Printshow and, in the AirWolf line, this debut really was big. The latest machine, the AW3D HD has one of the larger build volumes in the desktop market, measuring  12″X 8″X 12″ (300 mm x 200 mm x 300 mm).

The latest release from AirWolf 3D sees a machine in a similar size range as the Lulzbot TAZ 2.0, but it’s actually a bit larger. According to the company, the AW3D HD also features increased speed and accuracy, as well. Printing with a resolution of up to .05 mm and speeds of up to 150 mm/s for the perimeter, 400 mm/s travelling, the AW3D HD can handle both ABS and PLA, as well as many other tested materials. Also incorporated into the company’s new machine is the Airwolf Jam-Resistant hot end and an LCD SD card reader. 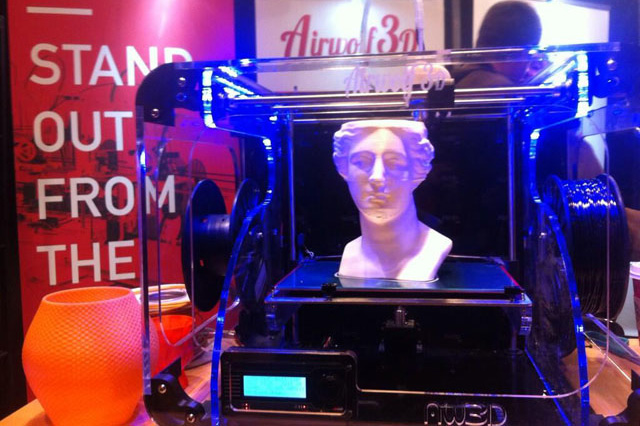 Airwolf 3D’s president, Erick Wolf, boasted the specs of his new printer, saying, “With this printer it is now possible to repeatedly print very large objects quickly and precisely in a number of different materials. We applied what we learned from the V.5.5 and XL and customer feedback to design an incredibly reliable 3D printer incorporating oversized motors, precision motion belts and bullet-proof electronics.”

The HD can be purchased as a fully-assembled unit for $2,999. Though the company is right down the road, I haven’t had a chance to stop into their shop. Hopefully, you can look forward to a review of the Airwolf 3D headquarters shortly after the holidays!