If the TAZ 1, the LulzBot 3D printer that Juho reported on in May, is the Tasmanian Devil from the Looney Tunes cartoons of the 1950s, then the TAZ 2 represents Taz-Mania, the 1990s cartoon that demonstrated to after-schoolers in North America that Taz is not a solitary devil, but one with a diverse and entertaining family.  What I mean to say with that, somewhat childish, analogy is that the TAZ 1 was just the beginning because, this month, Aleph Objects, producers of LulzBot 3D printers, released their plans for the TAZ 2 desktop 3D printer on Fundable with huge success. 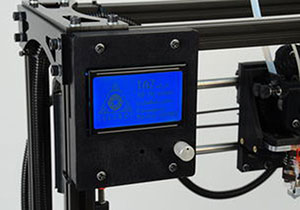 After raising almost 250% of its $100,00 goal, Aleph Objects is ready to put the TAZ 2 into production. The TAZ 2 is meant to be seen as Aleph’s push towards large-scale manufacturing.  What the TAZ 1 boasted, according to Juho, was, namely, a large print volume of 298 mm x 275 mm x 250 mm (11.8” x 10.8” x 9.8”).  In addition to that ample size, the largest build volume of any 3D printer below $5,000, the TAZ 2 features an LCD display and SD card reader, allowing for tetherless printing. And, with a range of print programs offered by the LulzBot software, users should be able to achieve more precise accuracy and repeatability, as well as utilize a diverse selection of print materials, including PLA, ABS, HIPs, wood and nylon.

The latest addition to the LulzBot family, like its predecessors, carries the Free Software Foundation’s Respects Your Freedom (RYF) certification mark. As the only 3D printer line to carry the approval of Richard Stallman, founder of the Open Source Movement, LulzBot is dedicated to Libre[1] Hardware and encourages the freedom explore and modify their printers.  This doesn’t mean that other 3D printers aren’t also open source, but that, maybe, they just haven’t got around to applying for an RYF certification mark themselves.

The more I use my own printer, with a build volume of 8 in3 and no wireless capability, the more drawn I become to these printers with large print areas and SD card readers.  Of course, if I want get a printer with such upgrades, I’ll have to pay a bit more. The TAZ 2, for instance, costs $2395 through its Fundable page.  Is it worth the price?