Of Microscopic Monkey Skulls and the Study of Bacteria

Remember that scene in Indiana Jones and the Temple of Doom where everyone was eating monkey brains out of those skulls? Combine that with Honey I Shrunk the Kids and you’ve got the lab of Jason Shear at the University of Texas.  Researchers at Shear’s lab in Austin are able to 3D print a variety of nanostructures for the sake of studying how bacteria behave in a well-controlled environment.

By zapping lasers, using a chip from a digital movie projector, at gelatin, the UT lab is able to fabricate microscopic objects around bacteria, essentially creating cages for the little fellas. This allows Shear and his team to contain the bacteria in a controlled environment where they can, after feeding them nutrients and letting them reproduce to a desired amount, introduce different independent variables to their heart’s content.  Shear explains how these 3D-printed structures are perfect for experimental purposes: 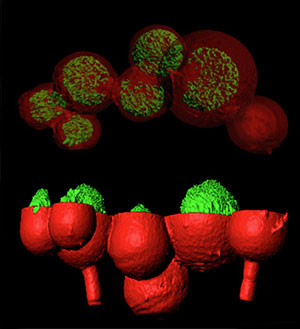 What’s key is these structures aren’t just controllable in terms of their geometries; they’re also very bio-friendly. The walls that we make out of these protein molecules are linked together tightly enough to prevent the bacteria from escaping, but they are porous enough to be chemically permissive. Nutrients can come in. Waste can go out. Signals can be exchanged. They’re trapped in these tiny houses, but they function like they do in biological environments.

The possibilities for various studies are endless. Bacterial gene expression can be examined, for instance, so that the lab can determine which genes respond to specific environmental conditions. And, interestingly, different caged communities can be placed alongside each other to see how they might interact.

So that I don’t cause any confusion, the UT researchers don’t necessarily study how bacteria behaves in tiny chimp skulls[1]; the tiny chimp skulls they’ve printed are just a demonstration of the high complexity that can be achieved with their microscopic 3D printing process. No, the shapes used to test bacterial interactions are a lot less frightening.  But the possibility for printing complex shapes is essential for creating specific types of cages for a given experiment.  One study featured the printing of a complex shape in which a colony of Staph bacteria was caged in one part of the structure, surrounded by a shell of Pseudomonas. Shear described how the bacteria responded in response to the introduction of antibiotics, saying: 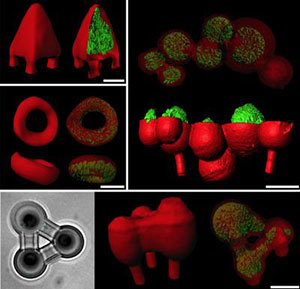 These are really common bacteria that are often found together in infections, and it makes sense that they would have mechanisms to sense each other. What the technology allows us to do is put them in conversation with each other, in very precise ways, and see what happens. In this case the Staph sensed the Pseudomonas, and one result was that it became more resistant to the antibiotics.

Shear also mentions that such experimentation could be important for the understanding of how disease is transmitted in hospitals:

There are studies that seem to indicate that infections are transmitted by very small microcolonies of bacteria, which are likely transported by equipment or staff from one part of the hospital to another. We currently know little about how this is happening. How many cells does it take? Do these microcommunities become particularly virulent or antibiotic resistant precisely because they’re small, and then in turn change the properties of bacteria on our skin or in our bodies? Now we have a means to start asking these questions much more broadly.

So, though they’re not creating cage matches for bacteria in chimpanzee skull thunderdomes (as, I admit, I was originally mislead by Gizmodo), they are being put to the test in various other shapes. Not as sensationalist, but probably more exciting on a fundamental level. If you’re interested in learning more, watch the video below. And for the Shear Lab’s other work, visit their website here.

[1] And I know that chimps are not monkeys; I just liked the ring of “microscopic monkey skulls”.