3D printed Bionic Prosthetic technology has been around for some time now, but what about bionic arms inspired by your favourite game?

Augmented future is part of a revolution in bionic prosthetic technology, and is a partnership between the video gamer developer Eidos-Montréal and Open Bionics, a Bristol based bionic prostheses design company. The aim is to produce affordable prostheses for amputees whilst pushing the boundaries of technology, this time with video games in mind. Their latest project has been the development of a 3D printed bionic arm inspired by Adam Jenson’s arm from Deus Ex: mankind Divided. The project also has support from Intel RealSense and Razer Stargazer technologies.

Many applications are reaping the benefits of 3D printings ability to provide customised objects at a lower cost than other methods, and Open Bionics is no stranger to this. According to them, there are 2 million amputees worldwide, and many prostheses available on the market can cost tens of thousands, which makes it incredibly difficult for many amputees to get the tools they need. Customisation of these non-3D printed prostheses is often expensive. However with the rise of 3D printing technology, this alternate avenue has provided Open Bionics, as well as other designers, the ability to design and print their own. Parts can be made in different shapes and customised to fit specific requirements of the user. This can include printing parts in different colours, and even taking an artistic approach to the aesthetics of the prostheses.

That is exactly what Augmented Future is aiming to achieve.

Deus Ex: Mankind Divided is an upcoming cyber-punk first person shooter game, combined with stealth and role-playing. It is a sequel to the game Deus Ex: Human Revolution, which was released in 2011. The protagonist, and player character, Adam Jensen, is a augmented former private security officer, and is working with Interpol to capture a terrorist group of augmented humans. Jensen secretly works for the Juggernaut collective, a hacker group helping him to confront the Illuminati.

The theme of the game itself has allowed the partnership of companies to look at bionic prostheses as not only useful tools, but also as high fashion items. 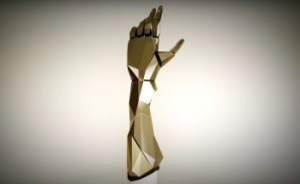 After game developers from Eidos-Montréal worked closely with Open Bionics, they together managed to turn what was concept designs into functional parts that could be shared with people across the world. Fans of the game series have been constantly contacting Eidos-Montréal in search of real, functional versions of prostheses depicted in the game, so this project has made dreams come true. The arm the project is working on in particular is in its functional prototype stages, so after fine tuning of the functionality and finish of the arm, you yourself could print yourself your own Adam Jensen arm.