Adobe has slowly been plugging away at the 3D front to make their brand of easy and powerful tools extend their reach into 3D modeling and 3D printing.  This has previously included small additions to Photoshop CC for prepping 3D models for 3D printing, either through 3D printing service bureaus or local 3D printers.  Last year, however, the company really made big moves into the space through the acquisition of 3D software specialists Mixamo.  And, now, through Adobe Fuse, anyone with computer and internet access can create their own 3D characters for 3D animation.  Play around with it for just a few minutes and you’ll learn that this is really powerful stuff.

I came upon Mixamo when Sketchfab announced last year that they had added 3D animations to their 3D modeling community, allowing 3D artists to upload embeddable 3D animations anywhere on the web.  With the news, Sketchfab embedded a Gangam Style animation of their CEO, Alban Denoyel.  After my wife got me my Structure Sensor for Christmas, she grabbed a 3D scan of me and I decided to give Mixamo a shot. 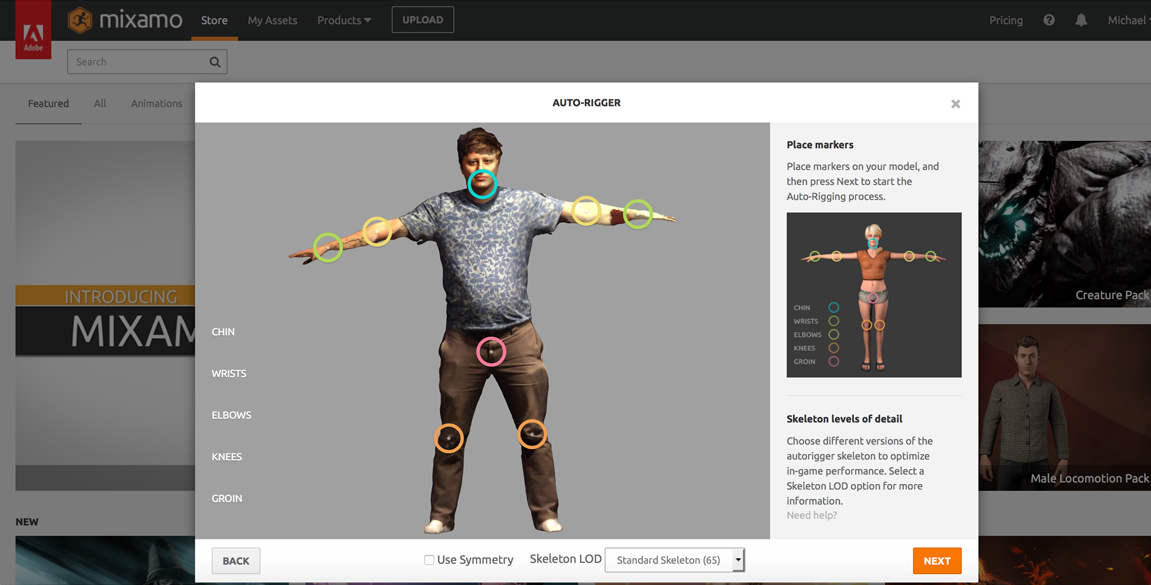 With scan of me standing in a loose T-pose with the itSeez3D app, I had a 3D model of myself suited for animating with Mixamo.  I simply uploaded the model to the Mixamo site and, after sliding designated rigging points into place above my wrists, knees, and other body parts, I had a rigged model for animation.

Thanks to a vast library of free 3D animations (2464-worth), I could instantly animate my 3D scan, resulting in this athletic version of myself.

These animations can then be downloaded for free to be used in video game design, short films, or just to share online via Sketchfab, where you can also view them in VR using Google Cardboard.

Absorbed with seeing myself in any one of the animations featured on Mixamo’s long list, I decided to give Fuse a shot, to see how easy it would be to create a custom 3D character with which to implement some of these animations. It turns out that Adobe Fuse is so easy to use that you can create a complete, clothed person and have them break dancing in just five minutes.  Customizing them exactly how you’d like will take longer, but, because just about everything is parametric, just about anyone should be able to pull off even a high level of customization. 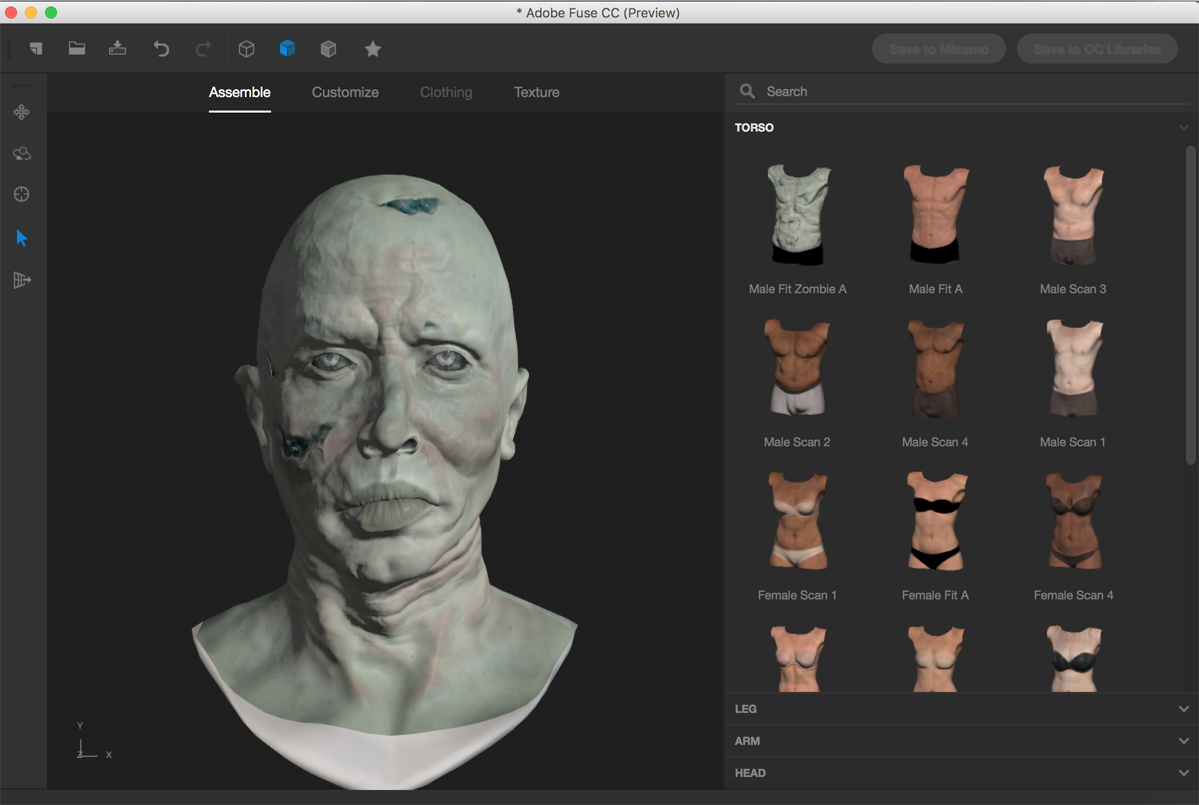 You start by selecting a head, before moving onto a torso, arms, and legs.  These are then modified using the “Customize” tab, which breaks down every part of the body into a variety of characteristics.  So, you can blow up the head, extend the forearms, shorten the legs, stick out the gut, and so on, fine tuning such minor details as the space between the eyes or the width of the nostrils. Clicking “Randomize” allows you to generate random shapes for the various features, as well, giving you unlimited permutations of your mutations. 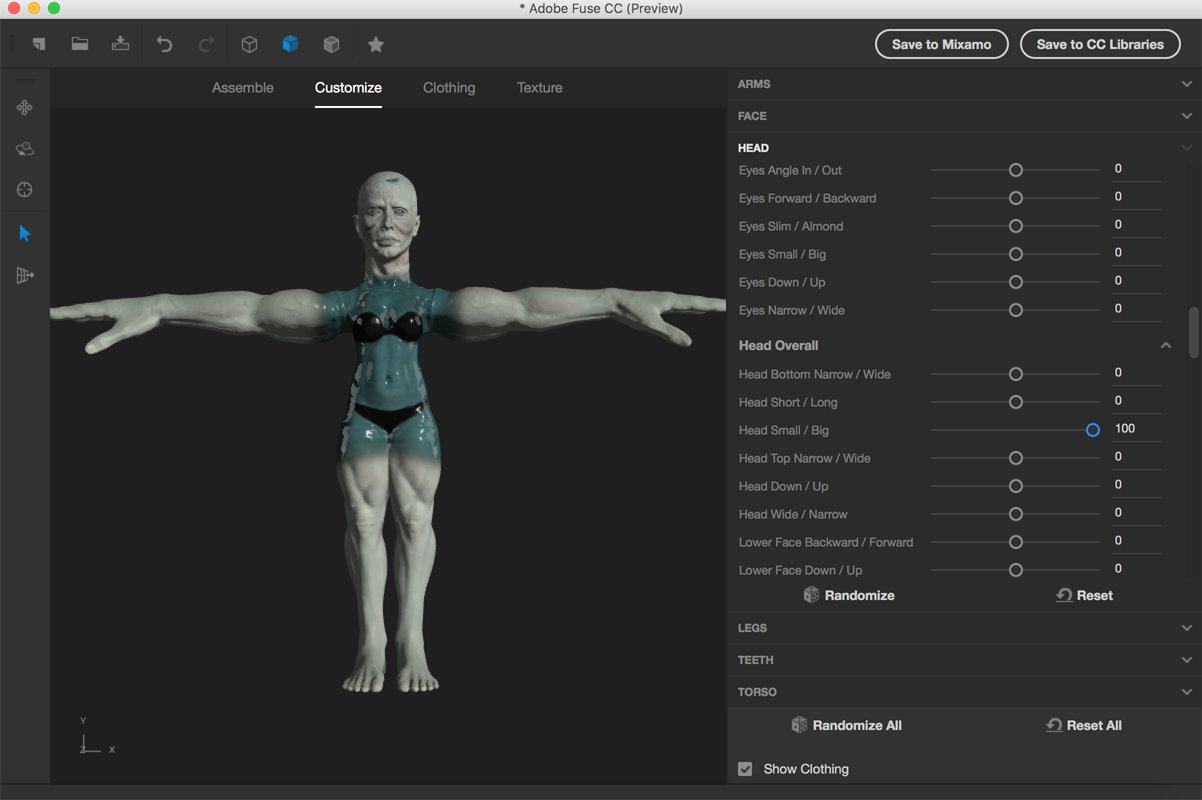 Next, you get to dress your creation, using a number of presets, which range from eyeglasses to tank dresses to gas masks. 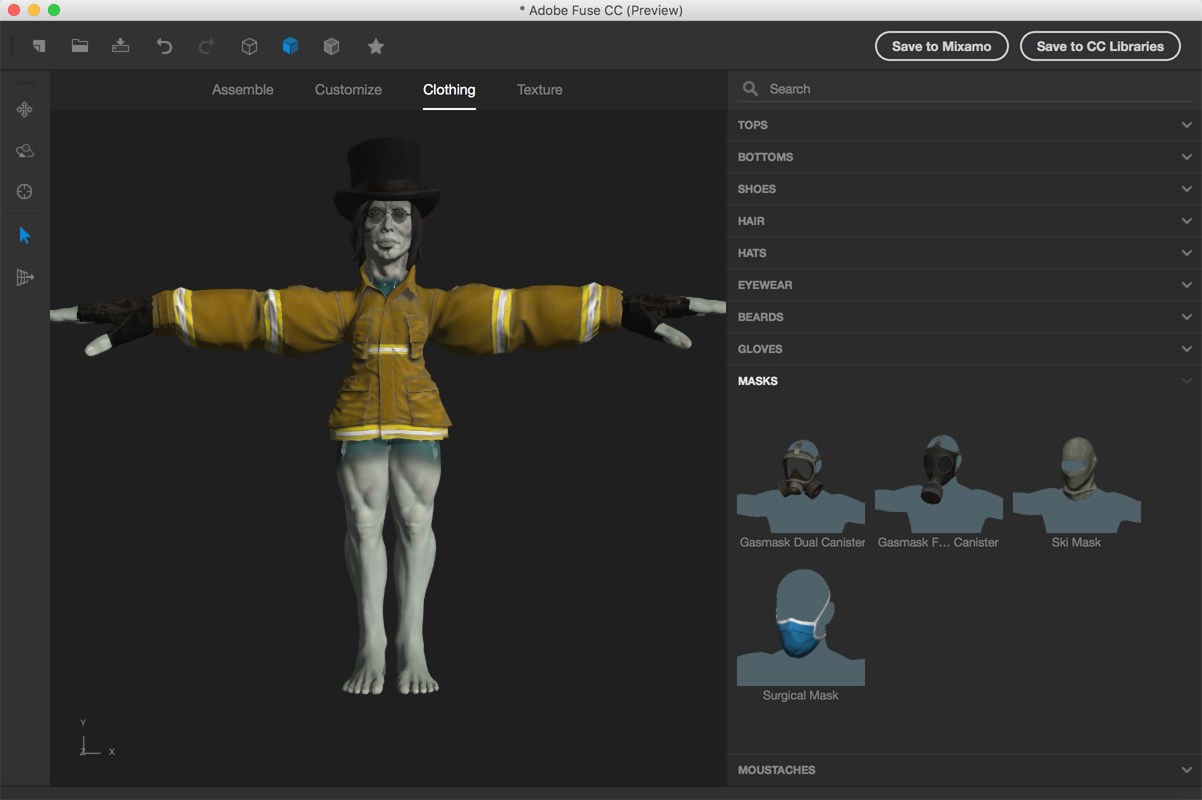 At first, the selection seems limited, until you realize that the “Texture” tab provides an almost unlimited variety of fabric styles and custom coloring options. You can change your standard firefighter’s coat from yellow denim to green velvet, aging it and tweaking the detailing. 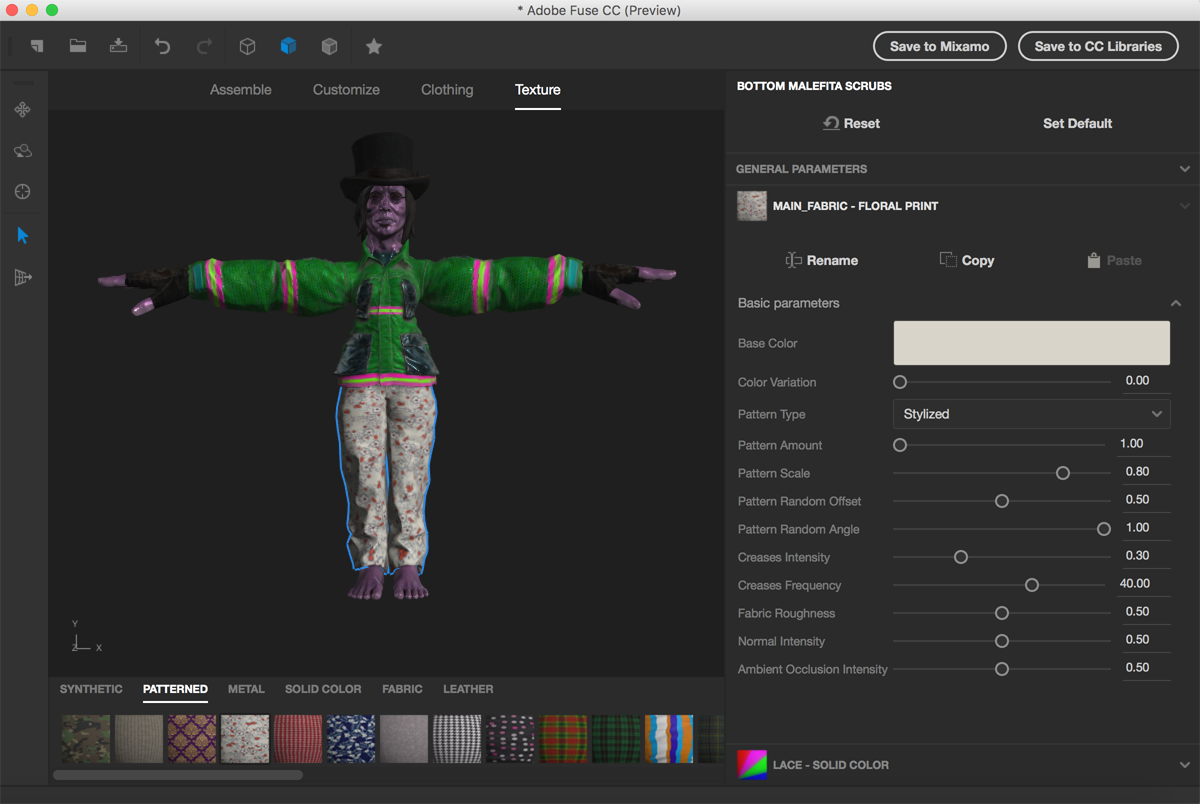 This holds true for your character, too, which you can age and dye any way you like.  You can spend hours absorbed in getting your 3D model of Aerosmith’s Steven Tyler to look just right before exporting directly to Mixamo for animation. 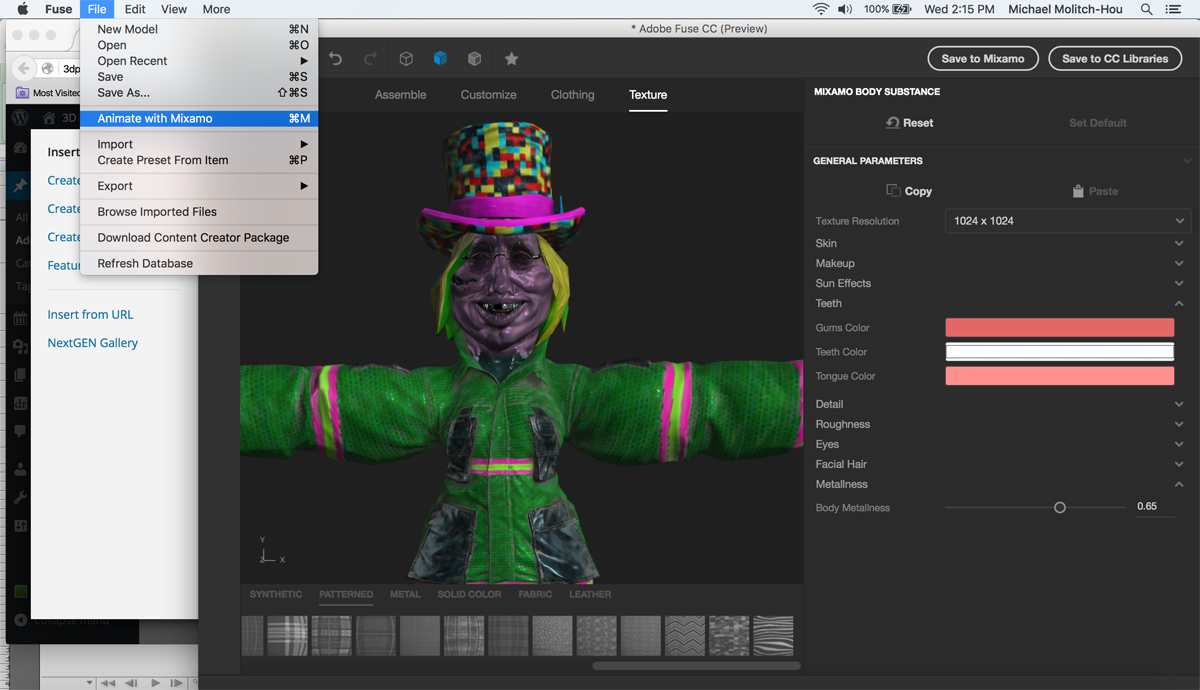 If you’re an expert 3D modeler, you can import your own models and textures to take advantage of Adobe’s simple interface to make any changes you like and easily generate new characters from your original design.  By incorporating a 3D printability feature, as used in Photoshop CC, it’s not difficult to imagine Adobe allowing users to export files for 3D printing in the future, tying the whole ecosystem together with the physical world. And, if they made this a community platform, where everyone’s models and animations could be downloaded and modified, this would become a vast resource.

Another feature that I’d like would be the ability to bring in my 3D scans. I tried to import the aforementioned 3D scan of myself to Fuse, to, say, put my head on a bikini bod, but have been running into issues.  For now, I’m pretty happy, though. And I’d say that Steven is, too.