Not only does Siemens annually invest over $6 billion in their Research & Development, but they are also huge advocates of additive manufacturing, both by supplying software for the technology and also by studying new ways to implement AM in the Factory 4.0 concept.

Now, the Freight and Products division of the company has even begun implementing desktop 3D printing into the workflow. Jamie McDyre, Head of Freight and Products – ASEAN Pacific, Mobility said to Ultimaker’s Australian distributor Imaginables that “Siemens is moving away from just looking at the factory floor, into considering the whole value chain now, and what that allows us to do, using 3D printing etc, it allow us to bring that process to our customers, and bring them into our design processes early on.”

As Imaginables reports, 3D printing allows Siemens to get their customers involved by bringing them into the conversation early and showing them prototypes of the final product. Mr. McDyre explained that it is a strategic advantage in engaging with their customers early in the design process, allowing them to be able to get their product to market much quicker than before.

Imaginables also met with Stephen Baker, Head of R&D, Siemens Rail Automation, at the AusRAIL Conference and Exhibition 2015. He explained how the company is using their Ultimaker 3D printers as part of a process to actually create real metal parts by a lost-plastic type of process.

“Primarily we use 3D printing to assist us in prototyping for new components and new products,” explains Mr. Baker. “But when we started using it [Ultimaker], we realised we can use it as part of a manufacturing process.” Siemens engineers basically start off using lightweight 3D printed plastic components from their Ultimaker and end up with the final product cast in 316 grade stainless steel. 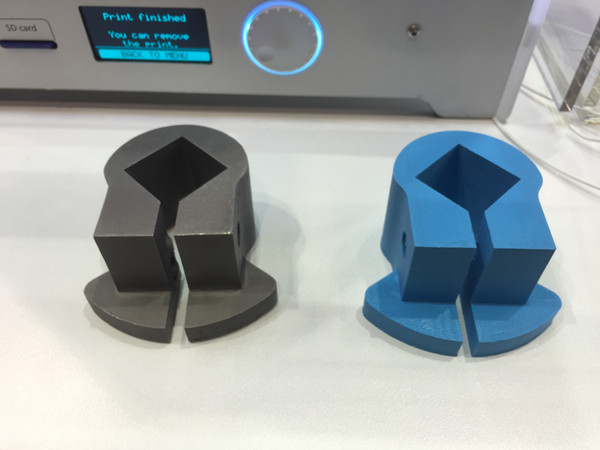 They identified a specialised foundry based in Sydney, that were able to take the 3D printed components printed in PLA, place them into a wax form and then form a ceramic slurry around the printed parts. As many in the industry already know, PLA is actually perfect for this process, as it simply burns off during the firing stage, which leaves them with a cavity mould for them to cast directly into

“We go from a 3D CAD model, to a 3D component, to the final metallic component without having to go through the normal process of manufacturing,” said Baker, “this has enabled us to reduce our time from the model stage to the final component stage to about a week to 2 weeks, compared to where this would normally take us anywhere between 12 and 16 weeks.”

More and more large companies around the world are moving beyond “normal” rapid prototyping on industrial 3D printers to actual “pre-prototyping” using desktop 3D printers. For Siemens, the requirements were an 8” build and sub 0.100mm resolution, with the choice falling upon Ultimaker for a sub-$10K machine and a company capable of offering suitable post-sale support. Maybe there won’t be Ultimaker 3D printers in every home anytime soon, but it sure looks like there will be one in many offices.