Never a company to do things by halves, 3D Systems has bullishly announced two new versions of its Cube 3D printer, ahead of CES opening its doors tomorrow, where these systems will be on show for the first time.

The first iteration of the Cube — 3D Systems’ first foray into 3D printing specifically for consumers — was originally launched just over 12 months ago. It’s fair to say it has since had a mixed reaction from the media, makers and consumers. However, one thing that 3D Systems has stringently maintained is that it was just the first one, more were always going to follow.

And so they have. 3D Systems has unveiled two new iterations of the Cube, one dubbed as the ‘next-gen popular Cube consumer 3D printer’ — an upgrade of the original and still fully dedicated to embracing consumers and getting them 3D printing at home. The second, called CubeX, is, according to 3D Systems, ‘a 3D printer packing professional expertise with consumer ease.’ This one is edging away from the consumer and positions itself in that “prosumer” market — it’s going head to head directly with the Makerbot Replicator 2 in style, build size and target market but effectively it is a rebranded BfB 3DTouch. It will be very interesting to see how the ‘prosumers’ at CES respond to it, probably unaware of this fact, which is most likely irrelevant to them anyway. 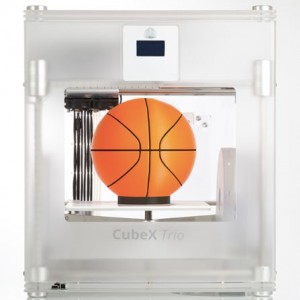 The CubeX is all about professional extras — with a bigger build volume (as depicted by the basketball) and triple-colour printing — however, 3D Systems does not explicitly target the professional in their literature, which is odd. Rather, according to the company, the CubeX is ‘the ideal printer for tech enthusiasts, serious hobbyists, educators and entrepreneurs.’ I’d say it’s not so much “serious hobbyists” because I haven’t met a hobbyist yet that hasn’t been serious about what they do, as well-heeled hobbyists. Pricing for the CubeX starts at $2,499 and for this you get three print modes (High Definition – 125 Micron; Crisp Definition – 250 Micron; or Standard Definition – 500 Micron) as well as a choice of print fill density: lite, medium or solid all of which will affect speed (typical trade-offs). The CubeX prints in both PLA and ABS plastics with optional, easy peel away supports for the most complex prints.

Print speed is given as being up to two times faster than its predecessor — but this, as I mentioned, will depend on the accuracy and density you want. Chances are for an precise, solid part it will be slower. A nice feature is the smart cartridge system though, nice touch.

Both of the new Cube iterations will be demonstrated during CES this week, with shipping of orders expected next month.