This week, you may have heard about two daring artists, Nikolai Nelles and Nora Al-Badri, that walked into the Neues Museum in Berlin with a Kinect and 3D scanned the famous bust of Nefertiti, an Egyptian queen from the 13th century BCE. This bust, which museum visitors are restricted from even photographing, is the subject of argument between Egypt and Germany, given its Egyptian origin and German location. As a means of recovering the bust, discovered in Egypt by German archaeologists and taken to Germany over one hundred years ago, Nelles and Al-Badri have uploaded a 3D printable file of the sculpture under a Creative Commons License. They say, “With the data leak as a part of this counter narrative we want to activate the artefact, to inspire a critical re-assessment of today’s conditions and to overcome the colonial notion of possession in Germany.”


One 3D scanning aficionado, however, does not believe that the German artists actually scanned the piece at all. Mike Balzer, host of the AllThings3D podcast and an engineer with a focus on low-cost consumer 3D scanners, suggests that, instead, he thinks that they “obtained this scan data illicitly from museum’s server, not as they say from scanning it themselves.” Based off of his experience using structured light scanners, like the Structure Sensor from Occipital, he suggests that there are a number of reasons why Nelles and Al-Badri’s “Nefertiti Hack” could not have been performed as their video below suggests.

Certain details in the video stick out to Mike as signs that the artists’ method of 3D scanning could not have achieved the finely detailed model they made available for 3D printing. For instance, the Kinect used in the video requires an external power source as well as a connection to a laptop or Windows tablet. From personal experience, I know that plugging a Kinect in can be a huge pain for 3D scanning purposes, as you have to step over the cord and carrying a laptop around while capturing an object. Mike, adds, “You also need a fairly continuous view of the object to ensure tracking and not that it cannot be done, but scanning at 90 degree axis as shown in the video is highly unlikely.”

As fun and relatively powerful as a consumer-grade 3D scanner might be, Mike also points out that it’s nearly impossible to achieve the level of detail seen in the 3D model of Nefertiti with such a device. Mike says, “I pride myself on the quality I can obtain which is good but does not have the high frequency detail as seen in their scan. This is an inherent trait of this type of device. You can see what can be done with specialized software and my lens system in some of the models I have uploaded to to my Sketchfab channel.” 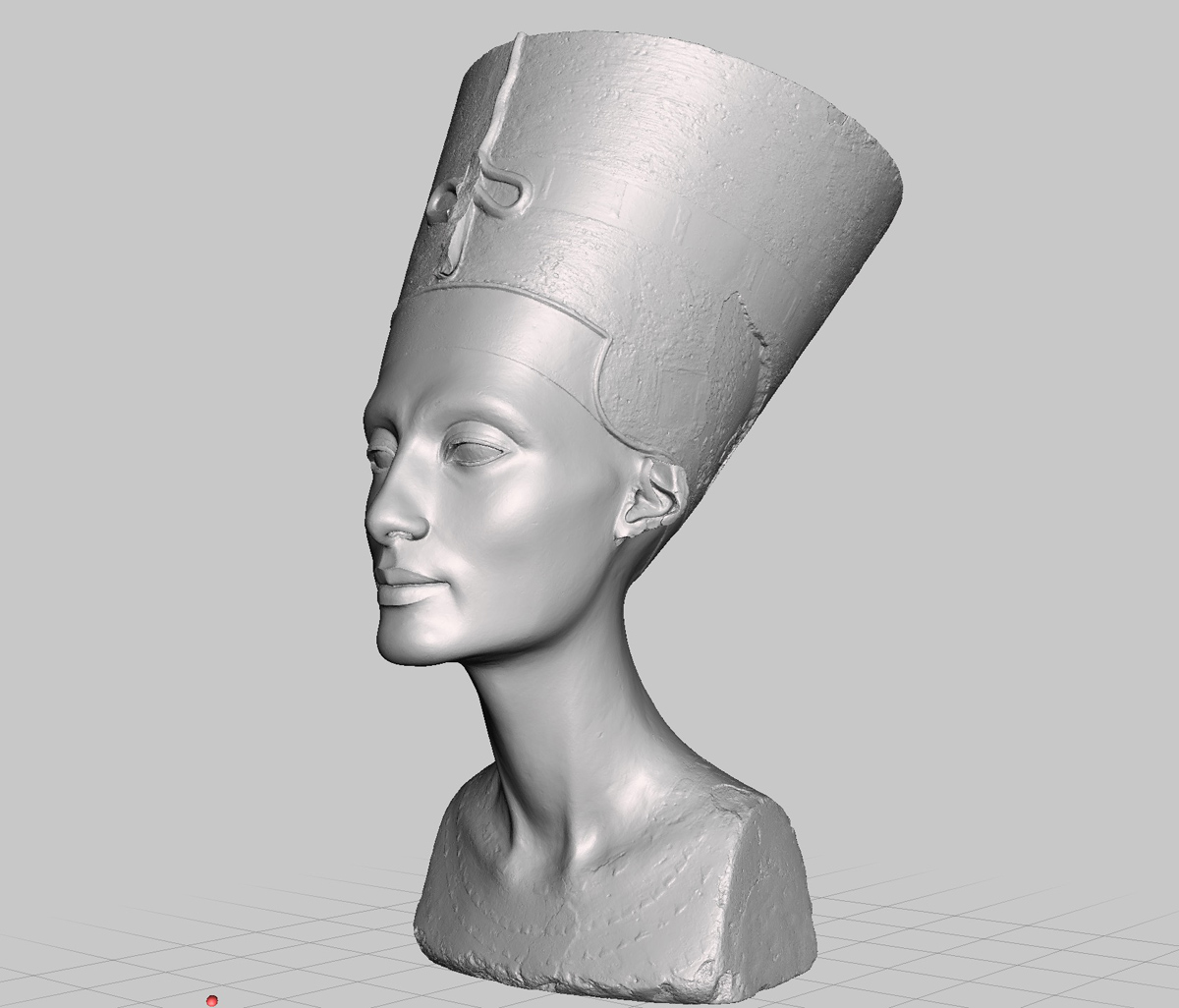 So, if they didn’t use the Kinect to get this great 3D model, how’d they do it? Mike’s own theory is that they “hacked the actual server storing the very high resolution photogrammetry version, or knew the company hired to scan it for them and obtain a copy. This video was done to make it appear they did it, otherwise suspicions would lead to an actual hack.” To dissect the idea further, Mike will be hosting a special episode of AllThings3D with another developer on the show at 9 am PST on Friday, February 26, 2016.  The live video link can be found here.

Personally, I don’t believe that hacking a server would have been required to obtain this model, though it’s a possibility. According to National Geographic, “Nefertiti became one of the most admired, and most copied, images from ancient Egypt.” More than that, there may even be doubts as to the authenticity of the bust itself, located in the Neues Museum.

Swiss art historian Henri Stierlin believes that the creation of the sculpture was actually commissioned by German archaeologist Ludwig Borchardt, credited with the bust’s discovery in 1912.  Sterlin claims, in his book Le Buste de Nefertiti – une Imposture de l’Egyptologie? (The Bust of Nefertiti – an Egyptology Fraud?), that the work was made to test ancient pigments but, after it was admired by a Prussian prince in Borchardt’s presence, the German archaeologist “didn’t have the nerve to make his guest look stupid” and pretended that it was an authentic artifact.

My guess is that a replica of the bust was 3D scanned by the artists, allowing them to further complicate the story of Nefertiti as a commentary on authenticity in the age of 3D scanning and 3D printing. Then, once they revealed the truth, we’d all be left wondering what’s real anyway. For that, you can turn to your friends at The Reality™ Institute.