3D Printing Industry to Grow by 400% Over the Next 4 Years, According to Wohlers

While consumer 3D printing is giving more and more people the opportunity to participate in the 3D revolution, at this moment in time, the real, consolidated growth of 3D printing technologies lies within its industrial applications, where additive manufacturing machines are increasingly being used for small series productions.

This means going from producing a single item for rapid prototyping purposes to additively producing 10 to 1000 of them, which translates into a 400% growth by 2018 and up to 700% by 2020, according to the industry leading Wohlers Associates’ latest estimates in the latest Wohlers Report. Published for the 19th consecutive year, the report is considered the “bible” of 3D printing and has been tracing the evolution of the industry from the very beginning. 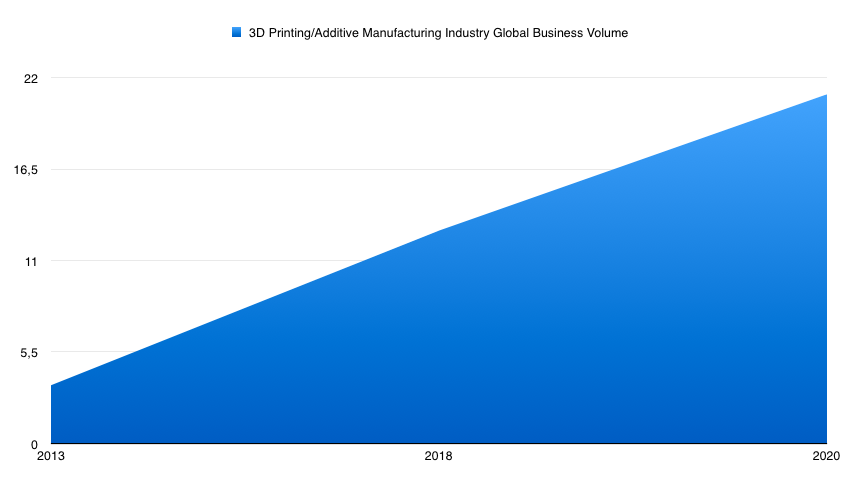 In the company’s most recent 276 page publication, which includes information from 82 service providers and 29 systems manufacturers, the AM and 3D printing industry business volume is reported to have reached $3.07 billion.  It is now expected to reach $12.8 billion by 2018 and a whopping $21 billion only two years later. This means exponential growth, with the industry poised to climb up to $200 billion (2% of the global manufacturing turnover) by 2030, according to general consensus.

Wohlers Associates also believes that consumer 3D printing will soon begin to switch from a perspective business to a real business and that sales of “personal” 3D printers under $5,000 in price will partly fuel future industry growth, but that he biggest growth contributor in the next four years will be the expanded use of the technology for the production of metal parts in final products.

“The industry is transitioning from a prototyping past to a production future,” said Tim Caffrey, senior consultant at Wohlers Associates and a principal author of the report. “Opportunities for AM in production applications are orders of magnitude greater than for modeling and prototyping. The money is in manufacturing, not prototyping.”