At the end of last week, and into the weekend, Materialise Sdn Bhd, the Malaysian branch of the pioneering 3D printing company, hosted a conference for the region. The conference, which utilized the tried and tested structure Materialise has adopted for its European and global conferences, focused on inspiring clients and 3D printing users by way of local applications of the tech, most notably in the medical and design sectors.

3DPI’s Ari Honka and Eetu Kuneinen were invited to attend the Malaysian event and reported back on how 3D printing is making its presence known in the region — in all the right ways.

Day 1 of the event, held last Friday, 14th June was a day full of presentations from various industries utilising the latest developments in 3D printing. Key Materialise partners — Stratasys and EOS — were also present and gave the audience their latest views of the 3D printing industry.

The medical sector was strongly represented, with two applications presented that gave some real insight into how 3D printing is supporting surgery across the country. Indeed, one of the presentations was given by Dr Ranjit Singh Gill  who has just conducted his first corrective hand surgery using Materialise technology and 3D printed implants. One of the great take aways from Dr Ranjit’s talk was that this type of surgery normally takes up to four hours but by using the latest software plan and 3D models together with a 3D printed implant, he concluded this surgery in a single hour. Furthermore, by using this technology and reducing the time the patient is under anaesthetic with an open wound, rehabilitation begins much earlier and the total recovery time is significantly reduced. 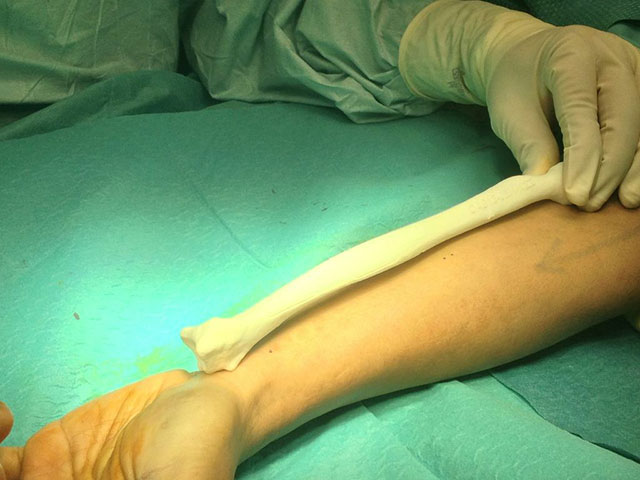 The second medical presentation was given by Dr TC Lim, who presented his latest findings for reconstructive surgery of patients with serious head trauma. Dr Lim’s work entails corrective work with patients that have serious injuries to their skull or structural damage to the face area due to an accident or deformity. Using the latest 3D mapping software and 3D printed implants the surgeon is capable of preplanning the surgery in advance and improving the accuracy of the final results.

Both, Dr Ranjit and Dr Lim concluded that the latest 3D modelling and 3D printing technologies are going to be transformative for providing tailored patient care going forward and will significantly improve the outcome of these type of surgeries.

At 3DPI, we plan to follow up with a more in depth look at these specific case studies later this week.

These surgeries are not unique applications anymore — 3D printing and associated technologies have been previously proven in this respect — but the universality of this tech and the impact it is having all around the globe is fantastic — thanks in no small part to the efforts of Materialise, it must be said.

Back to the conference and Friday ended in style as Materialise organized a fashion show for all of the delegates as well as local Malaysian VIP guests. The evening event showcased the design work of the highly acclaimed Melinda Looi together with a number of other local and world wide designers using 3D printing to express their visions.

Melinda is recognized as a purveyor of fine art and vintage chic, and her work is fashion’s answer to Avant-garde in Malaysia, namely the full throbbing force of elaborate detail and unconventional style.

The theme of the fashion show on Friday night was “Birds”. An avid lover of nature and the environment, Melinda professes to have always been inspired by these beautiful, flighty creatures that are an amazing engineering feat by Mother Nature herself. The designer sent a collection of five avian-inspired creations down the runway – Face It (headgear), Stand on Me (wedges), Her Love and Strength (necklace), Let Her Shine (skirt) and Open Wings (cape).

Each piece took months to design, create and convert into a 3D file, which was then sent to Belgium to be printed at Materialise HQ. Melinda commented: “The design process has been a real eye-opener and highly educational experience for me.”

She then continued: “This project was challenging because it involved co-ordinating efforts and technical expertise. On the other hand, it was also great fun to be able to work with such an innovative technology. Creating fashion with technology has always been something I wanted to do, so when Materialise approached me with this opportunity, it was like a dream come true! The collaborative effort involving people from different fields and backgrounds truly reminded me that exciting and beautiful things happen when art and technology meet! It is truly a great honour to be the first Asian fashion designer to design a collection using AM technology.“

Melinda was also a co-judge of the final of a 3D Printed Accessory Design Contest on Friday night. The contest received entries from around the world, offering designers an opportunity to work with a technology capable of bringing one’s wildest creative visions to life. There were 10 finalists and their winning designs were on show in their 3D printed glory at the show.

The design is inspired by the Peacock, the national bird of India, which is symbolic of beauty, grace, pride, and mysticism. The creation shows the elaborate courtship dance of the male; fanning out its tail and feathers. Made in polyamide, the design personifies the mystic bird, thus bringing alive its grace and beauty to the wearer. Presented here is a designs for a Head Gear. 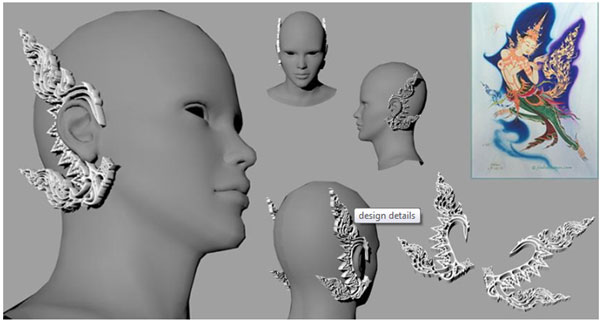 Thep Kinnaree is one of the loveliest of the Himmapan beings. Described as a beautiful half-woman, half swan, with the head and torso of a woman yet below the delicately tapered waist she has the body, tail and legs of a swan. Kinnaree also has human arms and the wings of a swan. While the Kinnaree has a male counterpart (the Kinnara or Kinna Norn) and is similar in form. The Kinnaree is renowned for her excellence in singing, dancing and her graceful form is often seen in sculpture, traditional architectures, and temple murals in Thailand. 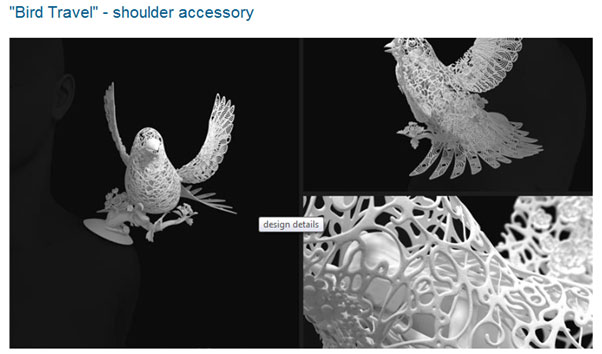 We designed this original accessory with our common inspirations, between dream and reality. Directly inspired by birds, this ship travel reflects our spirit of freedom, ready to flew away, but never far from our hearts, reminding us of our unique relationship. This accessory will be at your side, on your shoulder, to bring a flair of fantasy to your dress. 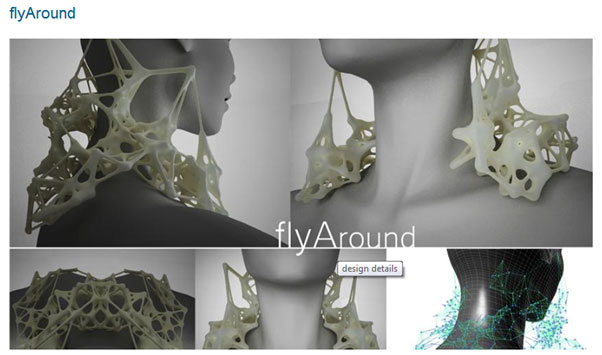 A kind of necklace with a design based on a dynamic simulation that emulates the flocking behaviors of the collective motion of a large number of birds // swarm intelligence //. A flock of birds that flying around a human body showing the connections between all agents. 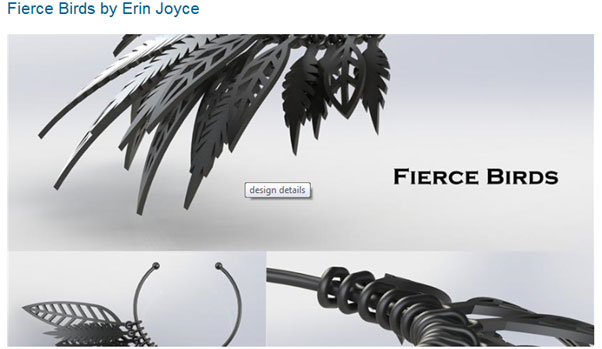 The design inspiration was fierce birds, such as hawks and eagles, and it is intended to have a dark, edgy feel. The deliberately overlapping feathers make the necklace form more abstract. The feathers are modeled pointing up to fit, but are then folded down and bunched up after 3D printing. 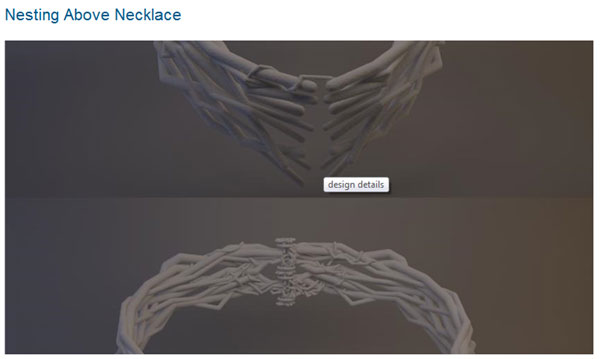 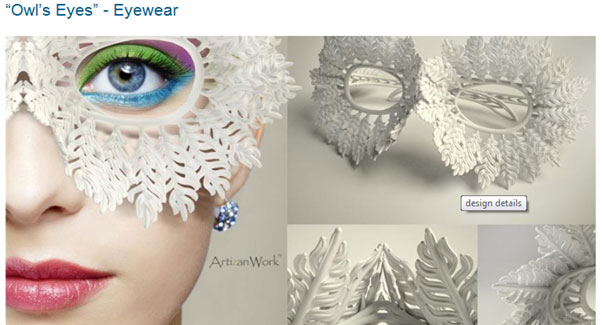 Bring out your inner animal instincts with these alluring owl inspired glasses. Perfect for a fashion show or any masquerade event where you want to make a grand fashion statement.

A circular array of artfully designed feathers around each eye of the glasses creates the distinctive facial discs which is symbolic of an owl. While the ribbed framework design of the glasses allows them to flex easily from a folded to an open position. When worn, this unique flexible design applies the perfect amount of pressure onto your face, making them very comfortable to wear. 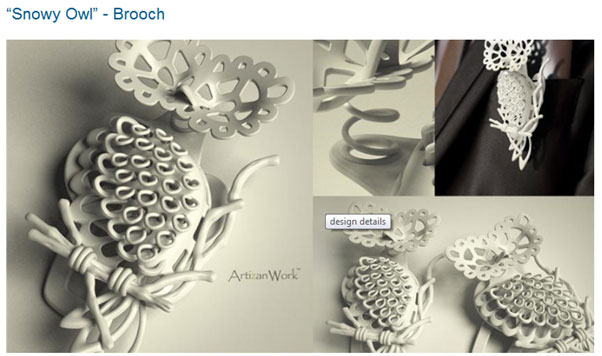 This bold and beautiful brooch is inspired by owls and was artfully designed to appear as if it had just flown and landed on a twig that is attached to your garment. While elegant, it’s also whimsical, with a freely moving set of eyes and feathers that can bounce when the brooch is shaken such as during walking.

The brooch can be worn on almost any jacket or shirt due to its meticulously designed articulating clip on its back surface. You just clip it on and rotate the owl to its perfect position. The owl will then self-lock in that position. 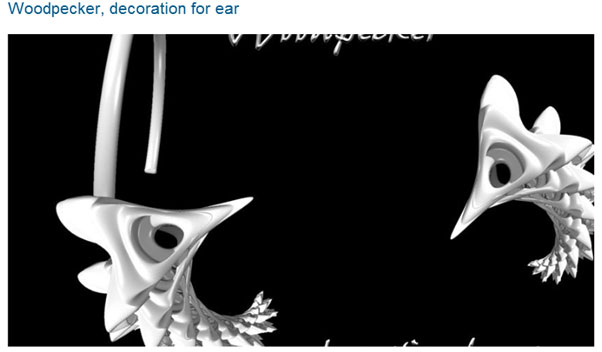 Woodpecker. Decoration for ear, hanging by the hairband, that represents an abstract bird: the woodpecker.The woodpecker birds are well known for their ability to tap the trunk of the trees, by pounding them with their beak.
What effect would make a woodpecker adorning the ear? 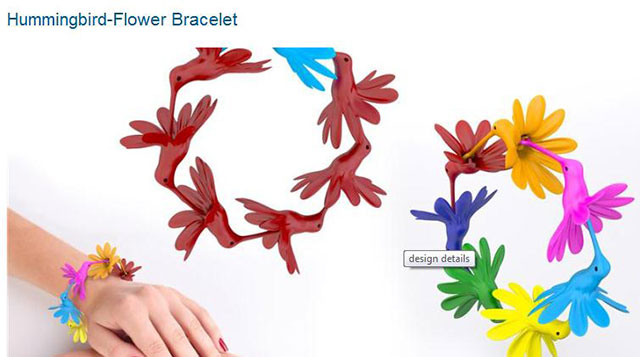 Hummingbirds are amazing flying jewels. Their radiant colors vibrate in the sunlight while they feed on the nectar of flowers. A flower and a Hummingbird are merged into one entity resulting in a unique bracelet design.

In the bracelet design I aimed at capturing the unique relationship between hummingbirds and the specialized, co-evolved flowers on which mainly the Hummingbirds feed. Hummingbirds are capable of sustained hovering, fly backwards and even upside down by flapping their wings up to 80 times a second. Such a rapid movement can only be distinguished in slow motion and then still it looks like if more than two wings are moving, more likely many wings all around them. This frozen moment in time inspired me to make the backside of the bird look like a flower (Silene) on which a hummingbird feeds, creating a chain of Hummingbird-flower-Hummingbird-flower etc. It emphasizes their co-evolution, one can’t survive without the other one, a harmonious symbiosis. The design makes people aware of this delicate wonder of nature.

The Bracelet consists of 7 separate Hummingbird-Flower sculptures that can be attached to one other like a chain to move freely and comfortably on the wrist. Each one can be used to open or close the bracelet securely using one hand. It’s flexible wing-leaves bend when the bracelet is pulled over the hand, to return to their original shape at the wrist.