Last week I reported on a new 3D printing retail space in the Netherlands. And in the weeks and months before that there have been an increasing number of physical retail stores opening up across the globe dedicated to 3D printing services and products. This week it is France once again. PROTOSHOP comes under the remit of Multistation a long standing reseller of 3D printers for industrial use. Multistation has been around as long as I can remember, way back when 3D printers were called Rapid Prototyping machines. 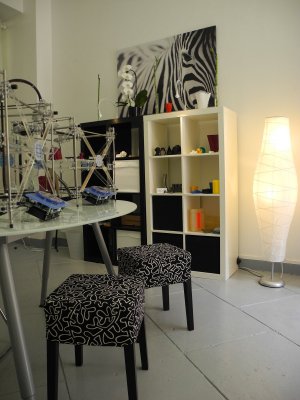 Located near Montparnasse station in down town Paris PROTOSHOP showcases many different 3D printers and printed products, including the EXTRU 3D (available as a kit or assembled); the TOUCH PRINT which is a quasi-industrial 3D printer and available for less than 3 000 euros. Visitors to the shop will be confronted by many, many different technologies including vprofessional tools like the Solidscape Drop-on-Demand (“DoD”) thermoplastic ink-jetting technology for complex wax patterns for investment casting of finished parts, which is used for jewellery and foundry applications.

PROTOSHOP also promotes 3D Scanning devices with different levels of precision and CAD software  — both of which can be used to create 3D printing input — as well as training for the spectrum of products on offer.