The main selling point of the beautiful Zinter home 3D printer is not, in fact, that one of the Directors of the company behind this stunning device is a minor TV celebrity. That publicity angle in itself is doubtless going to help the team who created this gorgeous bot, but, as reality TV soaps aren’t high on the past time list of many makers, probably not all that much at the start. What is going to sell this palatable example of refined design that fuses style, practicality and productivity, is the product itself. It looks great. 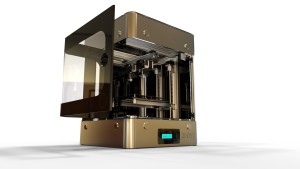 At this point it must be pointed out that this is an overview: I have not seen a Zinter in person. Many people will have seen her on TV however, thanks to that aforementioned celebrity angle. It’s not going to make any difference to me however: I don’t own a television… Surely I’m joking right?

Not at all. I stopped feeling the pangs of separation from the programs that I loved (about two of them, readily available on DVD) over two years ago. But, I do own a 3D printer. Does this represent my priorities? Absolutely. The Internet provides all of mankind’s data, information and knowledge in one home hub via smart devices. 3D printers provide 100,000’s of free versions of mankind’s devices, mechanisms and objects in a similar fashion to a home hub.

This lifestyle provides some insight: as the internet and TV merge, and as visual-interactive devices become but a set of handheld and mountable screens, the trend for smart devices-that-do-just-about-anything looks to continue to have a minimizing effect on the number of devices the average person has around the home. TV, VCR and cable one decade, smart TV, tablets and 3D printers but two decades later?

When considering that currently forward-thinking potential, having a 3D printer that looks as if it belongs in a home is important. Expectations of home technology are high now. We live in a world where mass labour has been cheap enough for long enough (mainly thanks to the two China’s) to bring prices low enough for average expectations in affluent post-industrial societies (that are currently trying to be less post- and more -industrial) to raise surprisingly high.

The same neighbours who watch sports on TV’s almost as big as the field of play would now scoff at a TV that doesn’t feature flatscreen-widescreen-high-def and dimensions the size of a killer whale. Whilst their knowledge of what a 3D printer CAN look like is the limiting variable (‘so ALL 3D printers look like an electronic Frankenstein like this Mendel Prusa? Guess we’ll go with that then…’) the average modern consumer is just that: a consumer. Not a prosumer, naturally inclined to see their home-making-machine as a means to an end, and the end being the print output object, of which colour-coordinated fluffy houseware requirements are indeed anticipated.

But, on the other hand, where are we storing our 3D printers? Many in the bedrooms of teens and twenty-something tech fiends with a passion for making and/or designing. Many in the home office. Many in the garage or cellar. Few, until the ventilation issues are resolved, in living-rooms and kitchens. As the 3D printers are hidden away, will potential owners really care about what they look like? In affluent Chelsea, yes. In most places, probably about as much as people put effort into thinking about what their 2D printer looks like.

With the advent of the open-source metal 3D printer project – arguably the most important development in home 3D printing since Adrian Bowyer first saw machines that replicate themselves (60% anyway) in the expiration of a plastic 3D printing patent — what a 3D printer ‘means’ in the popular consciousness may be about to change.

It’s fairly easy to compare an average-sized FDM/FFF home 3D printer with a fairly old 2D printer. It’s much more difficult to do so with a metal 3D printer sending sparks all around it and giving the air an unmistakable perfume au de metalworking. Naturally the comparison is with a mid-range milling machine or similar, with a natural residence in the home workshop.

I would speculate that within a year a home 3D printer that prints in plastic, wood, cement (like most FDM/FFF printers can now) and steel, and that prints circuits will be available.

If not, I’ll make and crowd fund one myself…

Where will the natural home of such a device be? The garage or the home office? With everything from basic safety considerations regarding children to tenancy agreement conditions that may come into play, I’m going to suggest that it’s going to be much more about ventilation and heat safety, much less about how good the machine looks. Until then, plastic-producing cubes abound. They will probably continue to sell at a steady rate for decades: for toys, for ‘repairables,’ math art vases, etc.

A near future stratification of ‘home 3D printer’ into subsets based upon materials of output seems likely. For those printers likely to end up in living areas, being beautiful will be a selling point. In terms of this, the Zinter could do very well. I’d purchase one for such applications after trying one out — if my mind was not on far more advanced machines.

Given all I’ve said above, it may be reasonable to use distinctions such as: The Zinter is a home office / studio office 3D printer for plastics and niche advanced materials such as wood and cement. Its main uses will be prototyping, plastic printables and repairables.

To be frank, if you are seeking a new device to add to your collection of funky home tech, it looks great. It doesn’t have the ‘maker cool’ of a MakerBot, Ultimaker or other RepRap derivative but it does have the kind of wow factor that will mean friends will think you are cool. Being cool, personally, is not one of my considerations. I’d own a TV if the fashions and fads of the flock were of concern to me.

However, it’s good to see another producer from the UK emerge. I’m anything but a nationalist, but seeing a nice, solid-looking UK 3D printer come to fruition and fame after the BotObjects troubles — the company that got on the front cover of Forbes for ‘having’ the ‘first’ colour 3D printer, only to then bail on all the opportunities in half a year to show a finished printer, even to appointed suppliers — shows promise for UK maker skills and home production potential. The Zinter is made by Ion Core Ltd, a UK manufacturer of pro, low cost, 3D printers for use in professional and home environments. The directors’ credentials seem legitimate and it is unlikely they’ll go into hiding after the launch of the machine. Indeed, James Marchant, CEO, commented “announcements …. will come thick and fast after Christmas!”

Those Zinter specs in full: