Polyes Q1, the Next Generation of 3D Pens Is Using Resin-based Ink

For video games – one sector where evolution happens by generations – new consoles comes out every five to ten years, after selling millions of units. For 3D printing, new generations pop up just about every one to three years, introducing new technology and opening up new possible applications. The new generation of 3D pens, one segment of 3D printing that has somewhat branched out to the consumer market with the 3Doodler, has just been presented by a company called Future Make Technologies: the Polyes Q1.

What Future Make Technologies has developed – and intends to take into production through a Kickstarer campaign in November – is the next logical evolution in 3D pens, one that writes in the air through light-induced solidification of photoactive resin-based inks, rather than ABS/PLA filament fusion. It is basically a stereolithography 3D pen and it uses the blue LED system invented by Nobel prize winner Qingyun Deng as its primary light source.

This system offers a number of advantages over fused filament: first it does not require elevated operational temperatures, making it safer for children to use. This also means no unpleasant molten plastic odours. Using light instead of heat, it has much lower energy requirements and it does not have to be plugged in while operating, thus offering full wireless freedom. One charge lasts between forty and 60 minutes and an LED light shows how much power is left in the pen’s batteries. 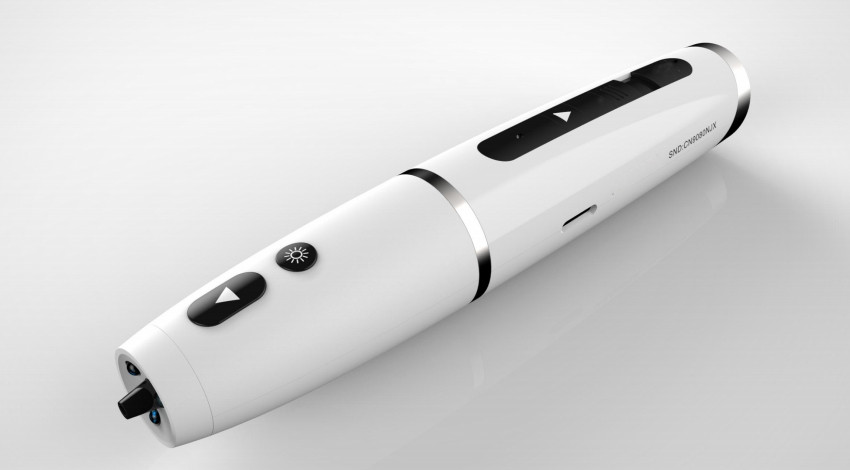 According to the team that developed it, the Polyes Q1’s resins will be available in a wide variety of colours (the entire rainbow spectrum), including “glittering”, and they will be safe to touch, meaning the pen can be used by artists to draw three dimensional shapes right on the skin.

Along with children – who will also benefit from a safety level sensor for increase protection of the eyes – and artists, the Polyes Q1 has been developed to be used by designers and more generally, by anyone who wants to give a rapid 3D representation of an idea without passing through CAD software. The pens integrated electronics system allows for quick regulation of the material’s flow rate to find the best setting for more and less experienced users.

The video, from a recent Expo in Shenzhen, China, last October 20th, shows the intricate resin sculptures that can be created with the Polyes. “A lot of people gathered to see or 3D printing pen”, said Future Maker’s Katie Wilson. “Most people showed great interest in the blue LED adopted by Polyes Q1 and said they could not wait to try it out.”. To be honest, I am very curious to see it 3D writing live as well.