When Full Spectrum Laser launched a Kickstarter campaign for it’s Pegasus Touch Laser SLA 3D printer they were only asking for $100,000. They reached that goal in a single day. After just a week they’re well on their way to tripling that. Let’s crack this Kickstarter open and see what’s inside, shall we? 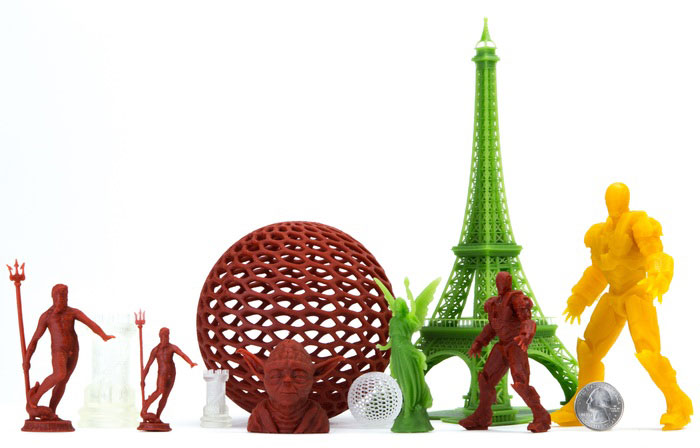 Price is most certainly a major reason behind its meteoric success. The first 10 backers get a printer for $1,750, the next 25 for $2,000, and the next 25 at $2,249. The retail cost is estimated to be $3499, so early adopters are getting quite a bargain, especially when you compare specs between the Pegasus Touch and the Form 1, last year’s 3D printing Kickstarter darling.

Like the Form 1, the Pegasus Touch Laser 3D printer uses stereolithography, a process of printing solid objects by using high-powered ultraviolet lasers to cure and solidify liquid resin. A platform will be held upside down in the resin while a powerful ultraviolet laser cures it layer by layer. As you would expect from a company known for building them, the Pegasus Touch is using top of the line lasers that promise to print up to six times faster than other SL printers. Because it can pulse its laser source at over 500kHz while moving the laser at a lighting quick 3000mm/sec, the 8 inch Eiffel Tower model pictured here took only five hours to print.

But speed isn’t the only thing that is being brought to the table. An integrated Internet Connected 3D Printer App Store with touch screen interface will give the user access to high quality 3D models formatted to work perfectly with the Pegasus Touch. Full Spectrum Laser even suggested that in the future they may be able to let users sell designs to each other directly through their app store, virtually eliminating the need for an external computer. And of course the comparatively massive print size of 7 x 7 x 9 inches is pretty sweet. Larger single print objects and less parts to multi-print objects is never a bad thing.

As with anything on Kickstarter, there are some possible downsides. This is Full Spectrum Lasers first 3D printer, so while they may have a solid background in design and manufacturing, this is still new technology for them and they’ve only hand-assembled prototypes to date. In addition, the Pegasus Touch is only optimized for use with their own resin. The designers state that it is necessary to use their specific formula in order to maintain the speed and quality that they promise. They have mentioned the possibility of adding support for different brands or open sourced products in the future, but for the time being you’re stuck buying proprietary resin — an all too familiar story.

There is almost a month left for their Kickstarter campaign, so expect Full Spectrum Laser to add a lot of additional information and updates as well as new funding goals. They’ve already floated a few possible future goals in the comments section, where they are being quite active. And of course if you are at CES this week, head to Booth #32027 and see the printer and prints for yourself! You may even bump into Mike who will definitely be stopping by, he tells me.