Even though there have been a few attempts to create a portable 3D printer – Ben Heck’s iterative projects being probably the most famous ones – real commercial applications in this sector have been practically non-existent. Even Ingenious-Ben’s solution to make 3D printing mobile meant carrying around an honestly huge metal-encased suitcase – undoubtedly bringing joy to the people at the Maker Faire (where he showcased it), but also probably some serious muscular discomfort to the inventor himself. If the size is a core attribute in general 3D printer design, tech-wise there’s only so much one can do with hardware using deposition in the first place – the moving axis, big platform and of course the string of filament all take a lot of space, no matter how well they are put together.

In order to create something really small on the 3D printing hardware scale, maker/designer Marin Davide from Venice, Italy, has thus used a different paradigm and gone the way of photo-activating polymer resin instead of injecting PLA in a molten plastic form through a nozzle. The project’s name is LumiFold and as you can see from the feature image, the latter part of the name refers to the foldability, making the 3D printer very small in size indeed, but still not lacking much on the spec department – for example it includes an interchangeable resin bed and platform. Naturally, when the full size of the machine is 250 x 120 x 30mm (in its smallest form i.e. folded,) the 3D printer can’t be used for building massive objects, but the printing area is still a respectable 90 x 90 x 90 mm. At least based on sample images, it can also produce quality-looking objects (with a good projector), such as the miniature frog with 0.1 mm layers. 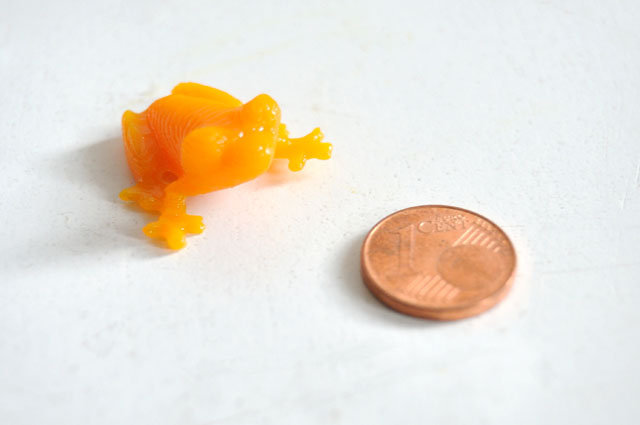 As you might have guessed based on the size alone, the projector for emitting the resin-curing light is not included – and skimping too much on that purchase would thus mean getting poorer results in return. For a DLP machine, which boasts a max Z resolution of 0.01mm (!) that’s definitely not something the user would want to go for. As a benchmark, Marin Davide states that with a basic XGA 1024×768 projector set 40 cm (~16”) above the plate, the resolution would be 0.2mm. That would in practice mean coughing up anything from around $300+ for the projector. However, one interesting feature regarding this issue is that LumiFold has included an automatic integrated UV sensor, which measures those critical levels determining the time needed for curing. Basically – and at least in theory – this means that the future owners of a LumiFold wouldn’t need to carry their own projector calibrated to their respective 3D printer with them when, say, visiting clients, but could easily use the ones available at any location – without a time consuming calibration/testing process. Besides using any projector for the process, the set-up of the light source being placed directly above the printer enables the use of makeshift containers for the resin, such as plastic mugs.

Perhaps not the most useful, but nevertheless one very cool additional accessory for the LumiFold is the HoloDock. Basically it’s a display showing the current printing phase in numbers, but also as an image. 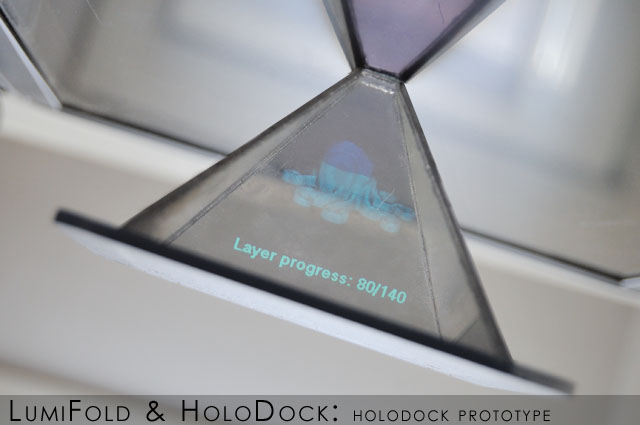 Here’s a two minute video of the LumiFold in action – where the creator has decided to let the 3D printer do all the talking.

To be honest, at least visually, LumiFold looks like it could still benefit from some finishing touches to the structure and design as well as including some kind of an optional mechanism to help fasten it more securely to the surface where it’s used – but this is all of course completely subjective. Moreover, open-source being the ethos behind the project, everything could be easily changed and added to the design by the end-user, with personal skills determining the limits of incremental improvements and beyond. 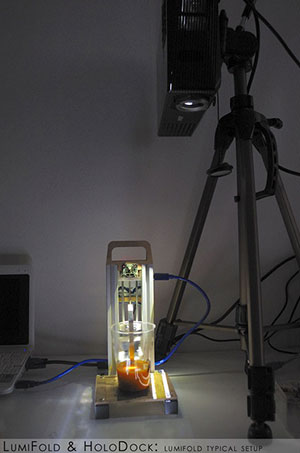 Due to – at least partly – the very reasonable pledge target (which has even sparked some doubts with some funders) – $1,500 – the project will be funded completely: with over a month to go, it’s already doubled that initial goal. The creator, Marin Davide, explains that the project has been set up so that even producing 5-10 LumiFolds will be enough to cover the development costs. I have to say that this is a breath of fresh air during these times, when so many projects are looking for ridiculous amounts of money through Kickstarter, IndieGoGo and the likes without any concrete evidence of performance or previous merits to show for themselves. It’s also a strategy that will undoubtedly result in receiving some well deserved free word of mouth marketing in the maker and other circles and create a stable foundation for Marin’s future projects as well.

Price-wise, the LumiFold goes for around $400 depending on the pledge level –  with that exact amount giving the portability-oriented maker enthusiasts the full kit and topping that price point by $29 means getting the aspiring creator’s hands on an assembled device. It is to be noted, however, that those prices do not include any resin or the HoloDock display – or, of course, the projector.