Layer by Layer – A New 3D Model Marketplace ……. with a Difference.

Ok, keep reading, I know, yes it’s another article about a 3D model repository, but this one appears to be a departure from what you’d expect.

Founded by Max Friefeld, Oliver Ortlieb, and Jonathan Schwartz  in Mountain View, California, Layer by Layer has created a quite different online marketplace for the buying, selling and sharing of 3D printable products in the increasingly crowded 3d model library business.

Their stand-out technology named ‘Instaprint’, allows customers to buy prints, not files or designs. At first glance, this may sound a little odd but in fact it is quite ingenious.

It effectively works something like streaming music or video on a desktop computer. Instead of downloading a 3D model in an appropriate file type, the customer actually streams a presliced model directly to their 3D printer simply by hitting the print button. This is all controlled by the Layer by Layer print utility which needs to be installed on your PC or Mac and is activated only once a purchase has been made on the site itself 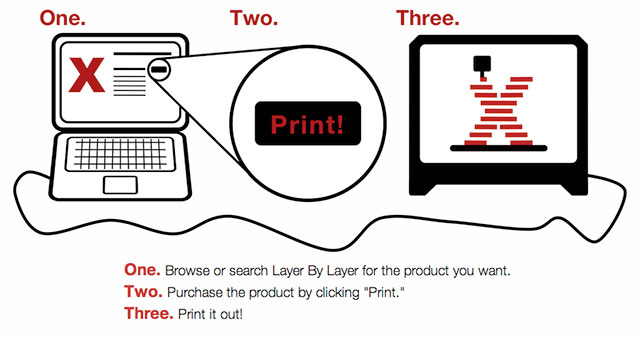 All this cool software sounds complex but it should achieve something surprising in the 3D tech domain, simplicity. No fiddling with file types, no installing unrelated software and no failed or endless attempts at slicing.

Co-Founder and CEO Jonathan Schwartz sets out their mission, “We want to make 3D printing more accessible, and more useful to non-technical users. We thought this was the best way—to provide users with a central marketplace where they can easily find products, and then instantly print them out at home.”

A very interesting by-product of the Instaprint technology could be a form of non-invasive DRM. Because the customer never has the original file, then as Layer by Layer note, the originators can be, “Assured their designs are safe from piracy and illegal alteration.

Right now the Layer by Layer site is up and running in beta form and at the moment the software only supports MakerBot Replicators 1, 2, and 2X though they are actively soliciting suggestions from users as to which other printers they should be supporting.

If you are a model designer and want to sell your wares or if you simply want to check out this simplified new way of working, Layer by Layer is available here.