There BEE a New 3D Printer from Portugal

BEEVERYCREATIVE is a Portuguese company with 3D printing passion a plenty. For the last 18 months, based in the small Portuguese town of Gafanha d’Aquém, a small and dedicated team have been developing the BEETHEFIRST 3D printer.

This is a beautifully designed, elegant and portable FFF 3D printer for the prosumer/consumer market. Seriously, this could sit anywhere in an office, studio or — dare I say it — home, and look like it had always belonged there.

I got up close to a couple of the machines at the 3D Printshow in London last week, and when they are running, it’s a quiet machine. I handled the parts — they looked easily as good as any of the other machines at this level. This is not surprising because in terms of printing specs they are on a par: printing 1.75 mm PLA filament at between 100–300 micron layers. At first glance, possibly the only limitation of this one will be the build size — it’s quite small, at 190mm x 135mm x 125mm.

I spoke with BEEVERYCREATIVE’s CEO, Diogo Quental, and he was quietly optimistic about what his team has achieved with this 3D printer. He was excited about 3D printing, don’t get me wrong, but so humble in his approach it was refreshing. Similarly, the marketing director, Sergio Moreira, who Diogo introduced me to also.

Diogo explained they had done a soft launch at the biggest design show in Portugal at the end of September, ahead of bringing it to London for the 3D Printshow. There, they were recognized with an award, I think in the electronics category, but don’t quote me on that. He was obviously delighted but almost embarrassed to tell me about it. I was quickly warming to this whole outfit. In this vein, they have been very surprised by the interest and the number of orders they have received already, around the 2,000 mark Diogo told me. They are now looking to scale up their production facilities. 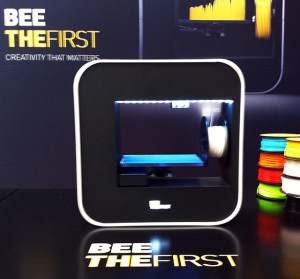 They also claim ease of use, I have no reason to doubt them, but no proof either! I think we need to get someone on the case for a first hand review. It runs BEESOFT, open-source software and the company also supplies a wide range of PLA filaments for €16.50 per 300g. Not the cheapest, but fairly competitive across the market. Some nice colour options too.

As part of a joint initiative with the Lisbon Architecture Triennale 2013 educational service, BEEVERYCREATIVE is running a design competition to celebrate the launch of the first Portuguese 3D printer. The REAL CITY Contest is looking for designs that portray a ‘BEEutiful City’ (twee but kinda cute) from architects, designers and artists and will accept entries through until the 18th November. Winning designs will be printed on the BEETHEFIRST.

The aesthetic appeal is what sets this 3D printer apart from its competition. If this is backed up by a positive user-experience from early adopters then I can see it doing very well indeed — both locally and much further afield.