The controversial lightsaber with a crossguard seen in the Star Wars: The Force Awakens teaser trailer pretty much broke the internet last week. Fan debate was heated, as these fan debates usually are, and a consensus on its level of coolness will probably never be reached. But for those of us that thinks it’s a pretty cool design for a lightsaber, French 3D printer company le FabShop has provided us with an Instructable for a 3D printable Lightsaber kit so we can create our own.

While the Telescopic Lightsaber here is patterned after the one from The Force Awakens, no one has really gotten a clear shot of it up close so they had to do their best. Samuel from le FabShop explained why they decided to create it in the first place.

“As designers, we were surprised to discover a new configuration of the lightsaber revealed in the now epic (and polemic) scene showing an unknown Sith Lord walking in a snowy forest.As Makers, we couldn’t help but try to find out by ourselves if this “crossguard” design was a good configuration or not… So we decided to build one, with our army of 3D printers.”

Take a look at this incredibly nerdy video showing how to assemble the Lightsaber:

Personally, I think it looks pretty great and provided you have the 3D printer and the time it looks like an easy build. The model is actually a collection of parts that can create several different configurations of Lightsabers, from the new crossguard version to the dual sided version used by Darth Maul and, of course, the classic configuration. 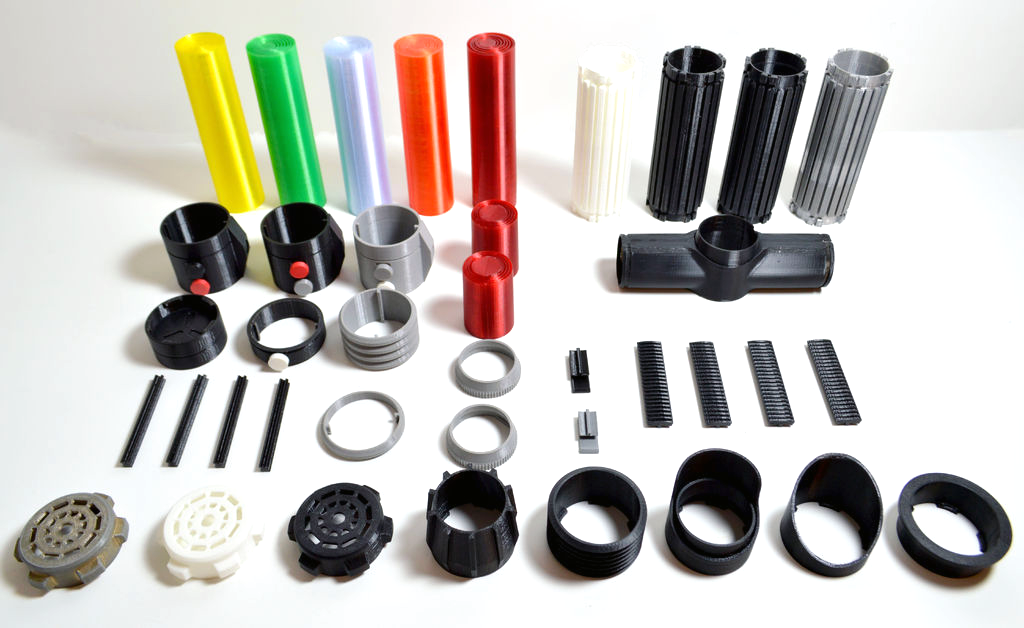 The parts can be downloaded for free from Thingiverse or Cults and le Fab Shop suggests that they be printed in PLA. While ABS would work, it is a different material so it would affect the assembly between parts and the durability of the finished piece. Anyone looking to 3D print their own would need a printer with a Z axis of at least 15cm (5.9inch).

Because the entire lightsaber is modular, if you have any sort of minimal competency with a CAD program then it should be pretty simple to add custom details to your parts before you print them. Maybe a different set of buttons, a new pattern on the handle or even entirely new fitting rings. And of course, anything that you print can be painted to give it some extra personalisation. 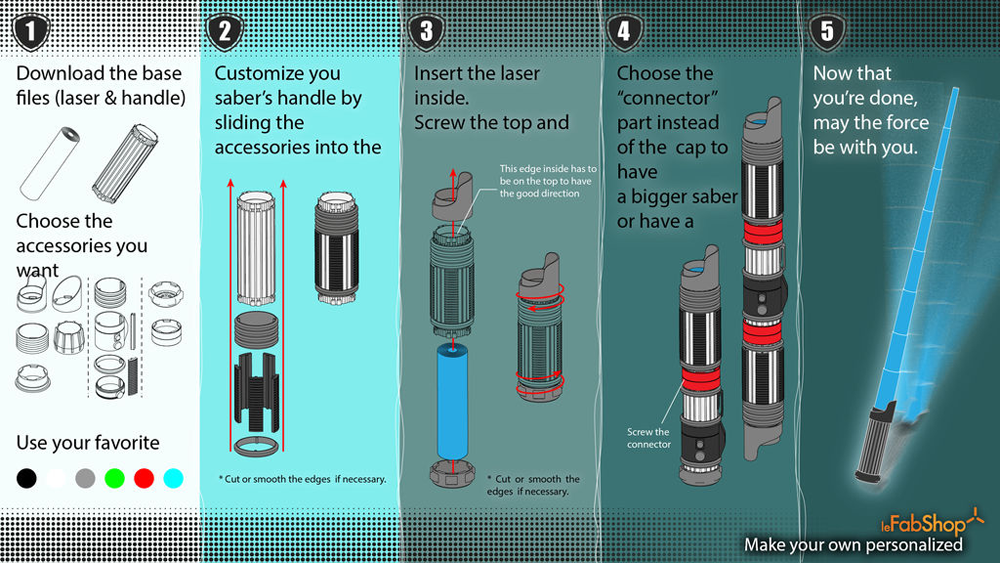 While the Star Wars fan reaction has been pretty mixed I’m sure the controversy will die down as soon as we see something else in the next trailer to be released that’s new and different. If there is one constant in this or any universe, it’s the fact that Star Wars fans are never happy with anything but they’ll still toss all of their money at whatever it is that’s making them angry. And because he did a much better job explaining why all you naysayers are wronger than anyone has ever been wrong about anything wrong, Stephen Colbert explains why the “menage a saber” is awesome:

Personally, I think it’s a really cool looking fictional laser sword. In terms of practicality it may not be ideal, but I’m not terribly concerned with how practical the weapons used by futuristic space ninja monks are. There would also be no fiery explosions in space and giant moon-sized space stations probably wouldn’t have big, uncovered holes in them that would blow the whole place up either, but no one is quibbling about those inaccuracies. Just enjoy your damn laser swords, nerds.