Dutch fasion designer Iris van Herpen has established herself as the pioneer of 3D printed fashion, creating a dress that Time magazine declared as one of the 50 Best Inventions of 2011.  Working with Materialise and Stratasys, her futuristic designs have become synonymous with the 3D printing industry.  At Paris Fashion Week, van Herpen has displayed her latest series of 3D printed apparel, her SS 15 ready-to-wear collection titled “Magnetic Motion”, inspired by the attractive and repulsive forces of magnetism. 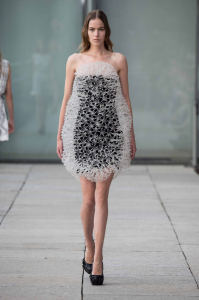 After a visit to CERN’s Large Hadron Collider, which has a magnetic field 20,000 x greater than that of the Earth itself, van Herpen created her Magnetic Motion line in tandem with Canadian architect Philip Beesley and Niccolo Casas and Dutch artist Jolan van der Wiel. Beesley, on the one hand, has used computation, synthetic biology, and mechatronics to create “living” sculptures.  Van der Wiel, on the other hand, has crafted sculptures using a technique resembling magnetic 3D printing to make fluid and organic shapes, previously covered in 3DPI. Casas too has been featured on 3DPI multiple times, most notably for his 3D printed smoke dress. All of their techniques fell directly in line with van Herpen’s own vision, blending nature and technology.

In her new Spring ’15 line, the designer utilized van der Wiel’s technique of laying down layers of metal and pulling them in different directions with magnets, yielding shoes and accessories with stalactite variations in texture. In addition to her traditional 3D printing methods, van Herpen also used injection molding, laser cutting, and hand crafting to create clothing that mirrors the movement of her models.  With a simple color palette of black, white, midnight blue, and nude she was also able to emphasize the structures of the items themselves, which are made up of lace webs, glowing crystals, feathers all meant to resemble the chaotic nature of magnetism.  She says of her inspiration, “I find beauty in the continual shaping of Chaos which clearly embodies the primordial power of nature’s performance.”

You can see all of her pieces at her website or you can watch them strut down the runway at Paris Fashion Week below: