When 3D Printing, LARPing, Laser Tag and Augmented Reality Collide you get SpellTag

By combining the customizability of 3D printed prop weapons, augmented reality and smartphones, Arduino technology, cosplay and LARPing, you get an awesome new roleplaying game just launched on Kickstarter called SpellTag that is basically a nerd gollum. It’s an unnatural construct assembled from parts taken from other nerdy things and combined to become something even nerdier. 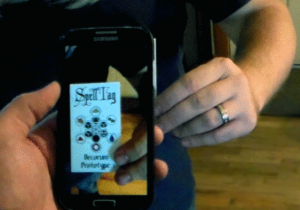 SpellTag creator David Ultis is an Idaho-based creator of open-source educational products and was inspired by the maker, cosplay and LARP communities to create a game that combines them all. Through his company Citizen Scientific Workshop, Ultis is creating the tech and prop based game to be open platform and players are actually encouraged to modify, hack and customize their weapons, spells and enchanted items to make the game play a personalized experience.

“[SpellTag] combines elements from open hardware and the 3D-printing movement and applies those capabilities to refreshing forms of live action role play,” said Ultis. “Drawing on inspiration from multiple communities and being open source in nature, SpellTag could revolutionize the very nature of live gaming.”

While the game sounds complex, it actually is pretty simple. You start with a 3D printed wand and a 3D printed amulet. Your wand stores mana and is used to power your spells, while your amulet holds your health and basically keeps score for you. Like laser tag, you “shoot” your opponent with your wand in the hopes of hitting them, and you duck behind cover or use protective spells to defend yourself. Spells are printed on cards that you can find in your Decorum Deck. When these cards are viewed through your smartphone, augmented reality will display special effects, animations, reveal clues or trigger events that players need to respond to.

The augmented reality is controlled through an Android app, which stores your magical items, abilities, records game experience, allows you learn new skills and helps you to solve puzzles. This transforms the game from a basic fantasy themed laser tag game and allows it to be transformed into as rich and complex a gameplay experience as the player(s) want. You can play without the smartphone app, but it certainly doesn’t sound as fun. An app for iOS is planned, however the project needs to scale up a bit before they can meet the stricter app guidelines of iTunes.

Here is the SpellTag Kickstarter video:

To create the rich gameplay experience that he’s envisioning, Ultis needs more money to develop the hardware and the ongoing stories and scenarios needed to maintain player interest so he launched a crowdfunding campaign on Kickstarter. He’s looking for a very modest and attainable $15,000 to put his game materials into production, and he’s offering really great rewards for backing the project. Beyond the basic “thanks”, t-shirt and keychain rewards, he’s giving backers the option to suggest a spell for $15, get a Decorum Deck of spell cards for $29 and his $49 t-shirt reward actually has interactive LED lights in it.

You can also back the campaign for $119 and receive all of the hardware needed to create your own wand and amulet, all you need to do is supply the 3D printer and print the files. Backing for $199 will get you the entire set including a 3D printed wand and amulet, and for $379 you get two of everything.

Earlier, when I called SpellTag a nerd Gollum, I was, of course, not using nerd as a pejorative. Letting your nerd flag fly is great, and the nerdier the better as far as I’m concerned. SpellTag really sounds like a lot of fun, and I’m actually annoyed that I don’t have enough friends willing to play it with me. How much do I have to back the project for in order to get a new set of friends willing to go full nerd with me?