The latest statement in 3D printed fashion is another dress, but it’s one of those ‘things’ that make you look, look again and then look some more. At least that’s how it was for me when Vanessa Palsenberg of Materialise tipped me off about the company’s latest collaboration with a high-end fashion designer. Actually, Anouk Wipprecht is more than a fashion designer, she is a fashiontech designer and an engineer who created the 3D Printed Smoke Dress in collaboration with Italian architect Niccolo Casas, a designer for .MGX. The dress itself, according to Anouk, “is an exploration in uncontrolled substances projected around the body. A new dialogue between our bodies and our surroundings.” Seemed plain weird at first, and yet, not so much the more I though about it — and looked at it. 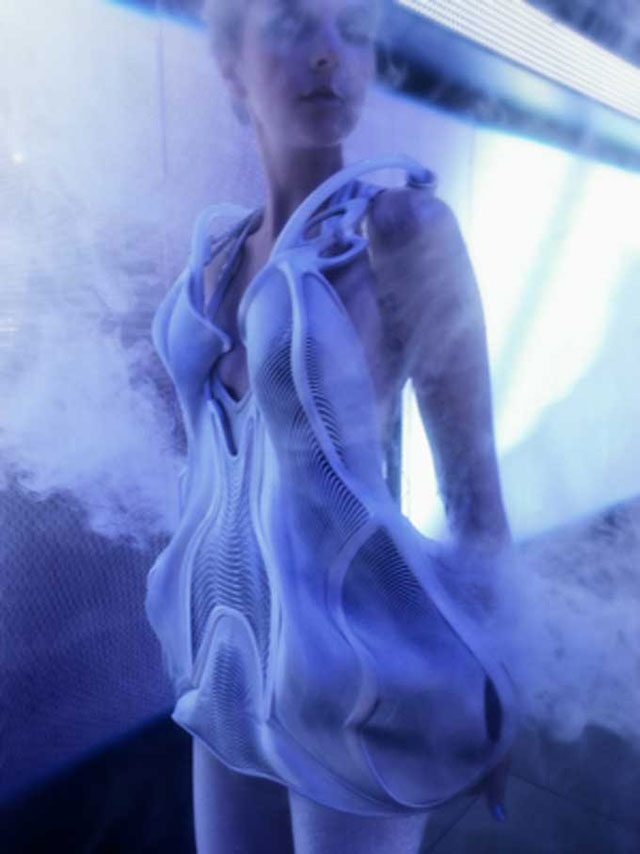 The dress is fully 3D printed (via laser sintering) using polyamide and Materialise’s fully flexible TPU 92A-1 material but utilizes an embedded smoke system mounted in the back of the dress, connected to the control unit that reacts according to embedded sensors to create “a perfect density of smoke” (whatever that may be!). The premise is that smoke is emitted whenever someone enters the personal space of the wearer.

I can think of a few instances where that would have been useful!!

However, moving swiftly on, the dress was created as part of a special eight-piece collection for Volkswagen, yes, the car manufacturer, and was showcased in a series of daily runway shows at the car giant’s booth at the recent Frankfurt International Motor Show (IAA). The collection was all about interaction and micro-control, apparently. If you ask me it was very much about getting attention — but then again, it kind of works in that regard too.

The Smoke Dress is fascinating and its ethereal beauty I find captivating — in a conceptual way even if not in a wearable fashion way. In practical terms Materialise 3D printed the dress in five parts to both provide support for the embedded sensors and smoke system, as well as to have the look and feel of ultra-futuristic fabric as desired by the designers. 3-maticSTL software was used to create an assembly system for the five different pieces of the dress while Magics software was used to prepare the design file for 3D printing.

But this is one of those things you need to see to believe it (or not). The video below goes some way to helping with that: