Instead using the standard firmware included with most 3D printers and replacing the PC interface with a Raspberry Pi, like most “Raspberry Pi Powered 3D Printers”, Owen Jeffreys, a Level 3 engineering student, claims to have created the “World’s First Raspberry PI-Powered 3D printer.”  Sure, it works about 25% as fast as most hobby printers (it took 25 hours to print a 60mm chess piece) but with an average cost of about $35, the Raspberry PI is ideal for fun “what if” projects. 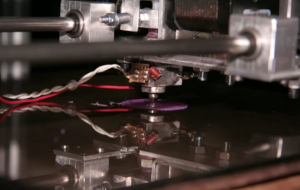 Why would you want to build a slower 3D printer?  In this case, it appears to be learn and sharpen a wide variety of engineering skills.  “I owned a Pi and wanted to do something useful and unique with it, which would help people who dismiss the Pi to realize that it is capable of a lot more than they could possibly imagine.  It was a very challenging task covering a whole range of engineering fields.  Almost every part of the 3D printer was made from scratch including, but not limited to, the circuit board, the aluminum framework, the drive system and the C++ program to run on the Pi.”

Though Owen claims to have created everything from scratch, there is similar code (open-source) by someone named Colin Wallace, or “Wallacoloo” on Youtube and Github. who demonstrates a Mini-Kossel that prints from the GPIO pins of the Raspberry Pi which apparently performs a very similar function:  “it listens for gcode commands, computes the toolpath & controls the stepper motors, hot end, etc., through the GPIO (General-Purpose Input-Output) pins of the Raspberry Pi.” 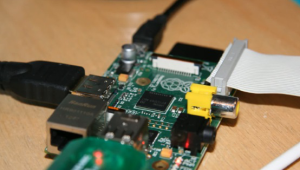 Owen’s next plans are to focus on improving the speed of the printer as well as possibly including an extra extruder into his design.  He is currently working on a modification to the interface board, currently a “hand-etched, double-sided PCB (Printed Circuit Board) to a compact “shield” which will stack neatly on top of any Pi.”  PCBs are generally added to circumvent having to use the GPIO pins of the Raspberry Pi for power input, which have to be powered by exactly 5 volts or you will fry your cute little single-board computer, because it is not designed for power input has no backward protection.  The USB schematic is carefully designed to be the primary 5V input.

Between the two of them, they seem to have laid the groundwork for an interesting path for hobbyists and engineering students to follow.