Artist Jólan van der Wiel has been exploring a unique method for constructing his art objects, embarking on a journey to create an entirely new field of architecture.  In the video below, you’ll see, enigmatically portrayed, a process by which the artist builds up his sculpture layer by layer using – I mean magnets.

To fabricate the series of ceramic sculptures for his Magnetism Meets Architecture series, van der Wiel mixed water with clay to make a slip, a liquidy suspension usually used for decorating pottery or casting shapes from molds.  In other words, to form anything from the slip alone would be difficult.  That is, unless you invent some crazy magnetic technique. 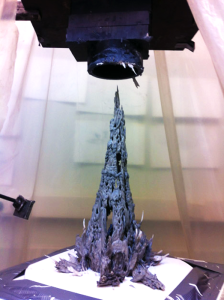 Experienced with magnets from his other works, like the magnetically crafted Gravity Stool and Iris Van Herpen’s magnetic dresses, the artist mixed iron filings into his clay suspension, allowing him to manipulate the material with a tool of his own design.  By extruding bits of the material out onto a spinning potter’s wheel, van der Wiel is able to build the shapes up layer by layer, gradually lifting a large magnet overhead with each layer.  The result is a play between van der Wiel’s controlled intervention and gravity’s natural determination.  The artist believes that his magnetic technique could yield a whole new field of architecture. 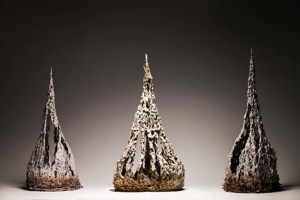 van der Wiel tells Dezeen, “The idea of creating buildings with magnetic field has always fascinated me. I’m drawn to the idea that the force would make the final design of the building – architects would only have to think about the rough shape and a natural force would do the rest. This would create a totally different architectural field. These are the very first models showing how future buildings and objects could look when they are shaped by natural forces.”

Still awaiting word on the man or machine behind the technique, but whether or not the mysterious tube extruder in the video is applying the magnetic clay manually or automatically.  Either way, the method offers insight into a completely novel way to 3D print objects that relies not on heat or light, but by  – I mean magnets.