Earlier this year, MakerBot opened up its MakerBot Developer Program, a way to provide software developers all of the necessary resources to create apps built for the MakerBot 3D Ecosystem.  Now that developers have had substantial time to create their apps, the 3D printer manufacturer has launched its MakerBot-Ready Apps Portal, where you can find all of the apps designed specifically for MakerBot 3D printing.

Currently in/at/through the Portal, you’ll find eight debut apps, three of which are for 3D printing design (Leopoly, Zotebook, Cookie Caster), three are meant for pure 3D printable entertainment (Modio, World of Rabbit, Robot Factory for MakerBot), one is meant to be more practical (Fraemes), and one has an educational focus (Makers Empire).  CEO of MakerBot, Jenny Lawton, said of the Portal, “We are really thrilled to be able to seamlessly incorporate educational, entertaining and useful 3D printing applications into the MakerBot 3D Ecosystem. In just one site, makerbot.com/readyapps, 3D printing enthusiasts can access third-party apps that make design and 3D printing even easier and more accessible than ever before. It’s our goal to continue expanding the MakerBot Developer Program and generating even more MakerBot-Ready Apps that can join these first ones in the MakerBot-Ready Apps Portal.” 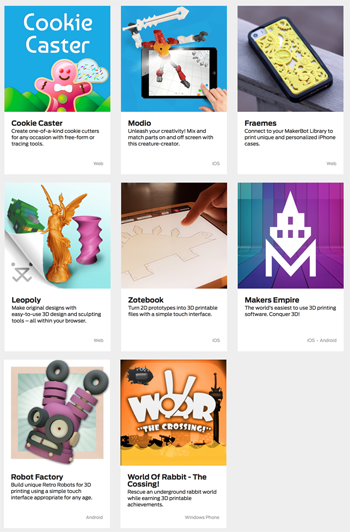 Looking for a brief rundown of the apps? Leopoly comes from the award-winning software company Leonar3Do, known for their intuitive 3D modeling programs, previously covered on 3DPI.  Zotebook is a quick prototyping app that allows users to draw 2D shapes and extrude them into 3D for printing.  Cookie Caster, as you may have already guessed, is an app for making 3D printable cookie cutters.

If you’re in the mood for entertaining yourself without any (socially defined) practical outcome, you may be more interested in World of Rabbit, from Singapore- and South Africa-based Breakdesign.  The Windows Phone app sees players save an underground world of rabbits from robots, while earning 3D printable models and accessories designed in part by Trobok Toys.  Robot Factory, developed by the Chilean Thinker Thing, uses advanced genetic modeling algorithms to inspire retro robot designs for 3D printing. Modio, also covered on 3DPI several times, allows users to build characters with modular parts.

Those who prefer to make their entertainment more practical will have fun with Fraemes, an app for customizing interchangeable and printable iPhone case designs.  And parents may enjoy Makers Empire, a simple 3D printing design app for kids and novices. 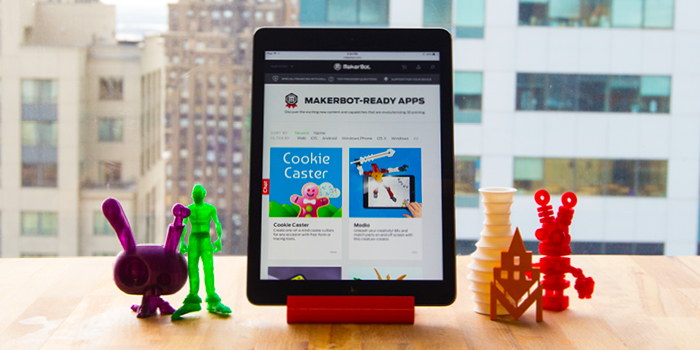 The apps aren’t limited to these eight, however.  Due to the brand’s popularity, there will surely be more apps found on the Portal when ready, edifying the company’s presence in the digital space, as well as the physical, and giving them a leg up on the inevitable bridge between the two.  And, as more developers create MakerBot-Ready Apps, the Portal will widen, eventually engulfing us all.