Back in June, MakerBot launched its MakerBot Developer Program, meant to easily connect app developers and game designers to the MakerBot 3D Ecosystem by handing them all of the resources they need to make 3D printable models.  After successfully launching its first MakerBot-Ready App, the Modio series of customizable 3D printed toys, the company has announced the second MakerBot-Ready App to take advantage of the program: Fraemes.

After funding a Kickstarter campaign earlier this year, Fraemes is now bringing its brand of custom 3D printed iPhone cases to a mass market with MakerBot.  What’s most unique about Fraemes is that they feature interchangeable inserts.  Users can have a universal case – called a “bumper” – for their iPhone 5 or 5s and create a number of different inserts to slide in, depending on their mood or the occasion.

CEO of MakerBot, Bre Pettis, said of the new MakerBot-Ready App, “We are excited to partner with Fraemes as one of our approved developers and offer 3D printable, customizable and personalized iPhone cases. Phone cases are always one of the most popular items to 3D print and now with the MakerBot-Ready App Fraemes, 3D printing customers can easily and simply customize iPhones cases – with no design experience necessary!” 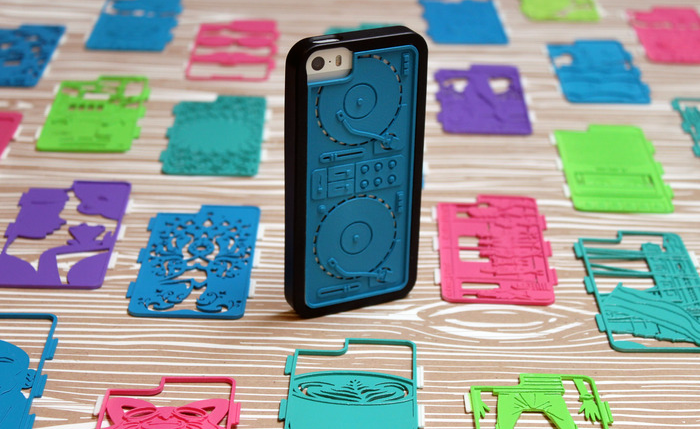 Fraemes’ graphics engineer, Sakunthala Panditharatne, added, “When we worked on creating the Fraemes technology, simplicity was our number one goal. We wanted to make it easy for designers and non-designers to design and personalize in 3D. With Fraemes, anyone can now print and carry around their own completely original piece of art, and change it up whenever they want.”

To get an iPhone Fraeme, customers can connect their MakerBot accounts at fraemes.com/makerbot , select a design – made by professional designers – and personalize the shapes and text presented along with the hip cityscape, pop culture icon, and monogram default templates.  Then, they can 3D print them from their MakerBot Library upon checkout.  For those that don’t have a MakerBot, Fraemes can be purchased for $20 from a MakerBot Retail Store in New York, Boston, or Connecticut.