The Future of Footwear: 3D Printed Shoes that React to Your Movements

If you’re familiar with SOLS Systems, you may have thought of them solely as a custom orthotics manufacturer.  If that’s the case, it’s time to expand your schema of what this 3D printing start-up is really about, as SOLS has just unveiled the prototype for a modular, 3D printed robo-boot at the FAST AW15 event, as part of New York Fashion Week.

It’s called the ADAPTIV and it’s intense, both in terms of its design and the teamwork involved to bring it together. The proposed device will be comprised of a nylon-esque (Elasto Plastic) shell 3D printed by Shapeways, nylon 3D printed insoles with air pockets and air bags, and a series of gyroscopes and pressure sensors. Though the technology hasn’t quite been nailed down, the plan is for ADAPTIV to invoke the gyroscopes and sensors to redirect air throughout the boot in response to a wearer’s motions and body weight. 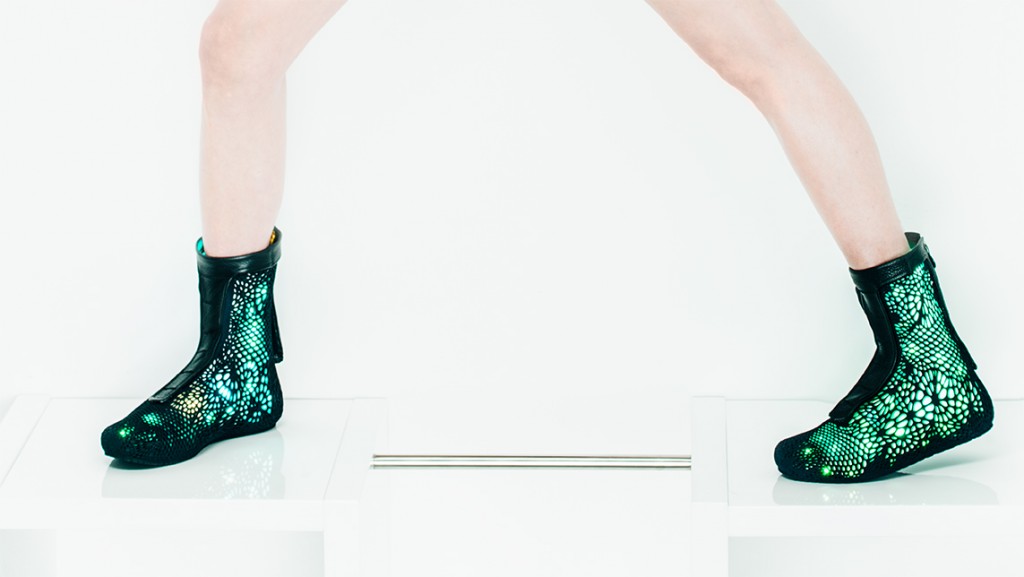 This reactive process, dubbed Instant Adaptability, is meant to expand upon SOLS’ already proven technology.  While their orthopedics are customized to a wearer’s soles via iPad photo capture and 3D printing, ADAPTIV involves a shoe customized to a person’s entire foot and ankle, as well as their movements and outfits.  As the wearer walks, runs, or jumps, air (or a liquid gel) is redistributed to various parts of the shoe.  The aesthetics of the shoe, designed by Continuum Fashion, are meant to adapt, as well.  Lit up by RGB LED lights, ADAPTIV will, ideally, use tiny cameras to register a wearer’s outfit and shift the shoes’ colors accordingly.  If this technique is refined enough, I can imagine complete digital texture maps to wrap around the boot in the future.

As exciting as the general concept is, in terms of comfort and flexibility, SOLS suggests that ADAPTIV and Instant Adaptability will also help athletes perform better.  Shifting air pressure to the ideal place in a shoe, they believe, will reduce lower extremity injuries and give them the gift of greater agility.

ADAPTIV may only be in the prototype stages, but I personally believe that it will find its way into reality.  In addition to the serious financial support and general attention that SOLS Systems has gained, as well as the CEO’s own experience in 3D printing at Shapeways, the company understands both the current, practical applications of the technology and its tremendous potential.  First, SOLS will find an immediate audience for custom footwear through their orthotics, ultimately proving their concept.  Then, they’ll introduce to the world the fact that our shoes need not be mass produced with a one-size-fits-all mentality.  I imagine that ADAPTIV will begin as a product adopted by pro athletes, possibly at a high cost, but that a more affordable version may be introduced to consumers later on.  And, while studios like Nervous System create custom attire, we’ll see a shift in how our goods are made, gradually allowing these forward-thinking start-ups to overtake traditional brands. Or be acquired by them.