Here’s a bit of beautiful news to wake up to on a Tuesday: 3D printing has been used to increase the quality of life of an adorable, disabled puppy dog.  In a recent video spot and Buzzfeed article, 3D Systems Director of ColorJet Printing Product Management, Tara Anderson, relays the story of a dog named Derby.  Born with deformities in both of his front legs, Derby was able to run again thanks to a unique pair of 3D printed prosthesis.

The story begins when Anderson was in the process of adopting a dog through a site called  Peace and Paws Dog Rescue.  Seeing Derby, Anderson couldn’t help but decide to foster him.  In seeing how he used a cart that Anderson purchased, she knew that the dog required greater mobility and freedom of movement to sate his energy and curiosity.  Thankfully, Anderson works for a company with a slew of 3D scanning and printing technology. 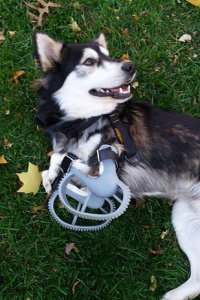 The 3DS team was able to scan positive molds made of Derby’s elbows with their Capture 3D Scanner, meant for industrial scanning.  You’ll see in the video below how they were then able to mold a 3D printed prosthetic, guided by animal orthotist Derrick Campana, using Geomagics software and the company’s Touch haptic mouse.  Then, with the ProJet® 5500X, the company’s multi-material 3D printer, the team was able to create a pair of one-of-a-kind prostheses made from rigid and flexible materials for Derby. Anderson explains that the curved design is meant to give Derby traction, while preventing him from digging and getting caught in the dirt below his new feet.

Derby was eventually adopted by Sherry and Dom Portanova, who say that his new legs allow him to run even faster than them, up to 2 to 3 miles a day.

We’ve covered a lot of stories in which 3D printing has helped animals gain an improved quality of life, from Buttercup the Duck’s 3D printed prosthetic foot to the stories from North Carolina State University.  But, I have to say, this is one of the cutest applications of 3D printing yet.  Either that, or I just really want a puppy.