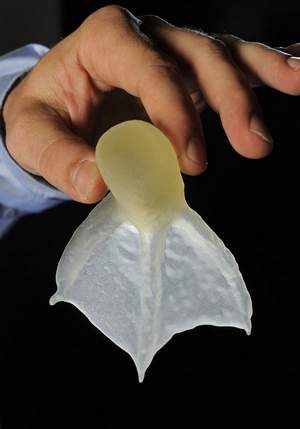 Better writers than I have touched on the connection between man and animal, how we are drawn to them, how they illicit our deepest sympathies and millions of views on Youtube. NovaCopy Inc. has given us another reason to feel good, to smile, watching a duck walk with a 3D printed prosthetic foot. Buttercup, the duck, had a deformed left foot at birth. It pointed backwards, and his owner thought he would have a better chance of surviving with a peg leg instead of a deformed foot. After the amputation, Mike Garey, Buttercup’s owner and part of the Feathered Angels Waterfowl Sanctuary, sought help from 3D printing.

An engineer at NovaCopy, Joel Graves, produced a prototype mould, later used as a prosthetic foot for Buttercup. Moved by the story, Mellissa Ragsdale, NovaCopy’s president of 3D printing solutions, acted on an impulse of charity and donated the printer for the application. It is becoming more and more apparent that the heartwarming stories tend to stem from colloborative efforts focused on a single goal of aid. Of course there are a myriad of possibilities in various fields of medicine, engineering and consumerism, but tales like these (ducktales) can’t help but make us smile. As 3D printing grows, so does the expidiency of projects like Buttercup’s. With burgeoning companies in the United States alone, Ragsdale mentioned the cheap and effective shipping process that leads to a possible 24 hour production time from file to product.

I found myself cheering for the quacking fowl as he found that support of his left leg. He moved slow at first, a little hesitant with his newfound ability, something that had elluded him since birth. But by the end you see Buttercup running with abandon, embracing his sock and printed foot. It works, new technology like 3D printed prosthetics, when good-hearted smart people come together, and there is no way they could fail a duck named Buttercup. The name alone deserves a happy ending.