There are companies going after 3D bioprinting, like Organovo and Rainbow Biosciences. And there are large research bodies and graduate universities making big breakthroughs with the technology, like North Carolina’s Wake Forest Institute for Regenerative Medicine, Scotland’s Heriot-Watt University and Germany’s Fraunhofer Institute for Interfacial Engineering and Biotechnology. But, when a college sophomore like Tanner Carden at the University of Alabama starts bioprinting, you begin to feel that the bioprinting revolution isn’t as far away as previously thought. 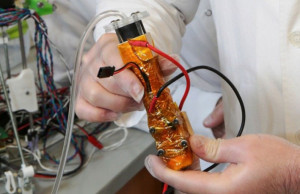 Carden, with his collaborator Devon Bane, have developed a specialized extruder to 3D print lattices made of sugar that may be able to mimic blood vessels. The device, originally named Carbohydrate Anhydrous Rapid Manufacturing Aluminum Extruder, has taken on the more mouth friendly name CarmAl, referring to the confection that inspired the extruder. The plan is to 3D print a sugar solution into a specified shape, place the print into a suspension of biomatter and allowing cells to grow around the sugar structure. Then, a solvent can be applied to wash away the sugar, leaving a cellular mass with vessels. Carden describes the process, “We’re using the sugar molecules in a form of reverse 3D printing. In this process, we first make the structures we want and then we embed them into a cellular matrix.”

Such a process, like bioprinting research taking place in other parts of the world, would allow for 3D-printable biomatter assays for drug testing, in the short term. Unlike flat cellular samples, 3D-printed cells are able to survive longer because they more closely resemble cells in their natural environment and can be fed by vessel-supplied nutrients to maintain vitality. As Carden says, “It helps to prevent necrosis in your sample.” In the longer term, such a process could yield 3D-printed organs. Camden explains that, if they were to 3D print a structure used to grow liver cells, the byproduct “would actually have vascularization in it that is modelled on how a liver works.”

Carden and Bane’s concept is derived from a vascular 3D printing method developed out of U Penn two years ago. Since news of Penn’s technique, Carden secured a UAH Research and Creative Experiences for Undergraduates Program (RCEU) grant to lower the cost of cellular testing arrays with which to test pharmaceuticals and, ultimately, cut the cost of drug research.  Using some of the funds to purchase a cheap, RepRap 3D printer kit, which he used to print upgrades for the machine itself, Carden explained that “Our whole goal was to keep it cheap and keep it simple.”

Bane, a UAH mechanical and aerospace engineering undergraduate student who has recently suspended his studies to pursue personal inventions and commercial projects, had figured out how to modify the kit’s extruder for bioprinting in a flash of insight. Carden tells the story, “He thought it up on the spot and he freehanded a drawing of it. Then he brought me this complex technical drawing that my dad understood.” Carden’s dad was able to manufacture the extruder at General Dynamics Global Imaging Technologies in nearby Cullman, Alabama, all for a cost of $12 in aluminum, Camden continues, “And the next day my dad handed me this extruder. It’s very simple and designed much like a syringe.”

As the University of Alabama’s blog describes it, the duo’s extruder contains a solenoid valve, controlled by software to time the release of nitrogen that pushes the sugar solution through a modular tip and at temperatures higher than those of typical 3D printer extruders. The higher temperatures allow for greater management of the sugar’s viscosity and, therefore, more accurate vasculatures. Now, all that’s left for the pair of researchers, is to actually grow the biological material around their prints. For that reason, Carden will be taking a trip to Wake Forest University’s Institute for Regenerative Medicine, who have already done a lot to pave the way in 3D bioprinting.

With a $9,948 award from the Charger Innovation Fund, and under the guidance of Biology Department Chair Dr. Debra Moriarity, Carden and Bane hope to further develop their software. Carden explains, “What we’re looking to do with this new funding is to increase the proprietary features our process has. I think that’s going to allow us a lot more flexibility in the future because having to make all these open source software programs talk to each other has been the biggest pain.”  Further down the road, the two have plans to produce a 5D printing process, a method for creating vasculatures that would branch out organically.

Then, of course, there’s the printing of organs, Carden thinks, saying, “In five or 10 or maybe 20 years, it will become affordable to actually print a liver or a heart. At some point you get to the use of stem cells, and personalized medicine becomes very affordable.”  Kids these days! What’ll they think of next?