The greatest breakthrough in 3D bioprinting to date has just been announced in the journal Biofabrication.  Researchers at Scotland’s Heriot-Watt University, working in tandem with Roslin Cellab, have shown that it is now possible to print using human embryonic stem cells (hESCs).

The study details a “valve-based” method for 3D printing stem cells.  This method, according to team member Dr Will Wenmiao Shu, is “gentle enough to maintain high stem cell viability, accurate enough to produce spheroids of uniform size, and, most importantly, the printed hESCs maintained their pluripotency – the ability to be differentiated into any other cell type.” In other words, the experiment was a success.  Not only did the printed cells continue to live after printing, but the researchers were able to print them in a pattern of their choice with a high degree of specificity while maintaining the essential function of the embryonic stem cells. 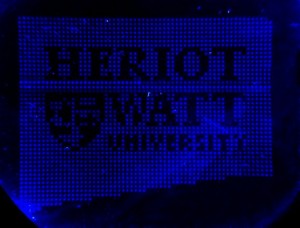 This breakthrough is an indicator of the progress that bioprinting is making.  Up until now, there have been cases of 3D-printed cartilage, muscle tissue and blood vessels – with the last feat accomplished using cells from a chicken. Now that it is possible to print hESCs, it won’t be long before artificial organs and tissue can be created for drug testing purposes and transplantation. Jason King, of Rosin Cellab, explained the potential benefits of the company’s research with Heriot-Watt University:

This is a scientific development which we hope and believe will have immensely valuable long-term implications for reliable, animal-free drug-testing and, in the longer term, to provide organs for transplant on demand, without the need for donation and without the problems of immune suppression and potential organ rejection.

With the advent of 3D bioprinting, it’s possible that drugs currently in the research and development stage could be tested on artificial tissues and organs to understand potential reactions, reducing the wait time from research to production.  And, with enough research, it may be possible to create organs specifically tailored to individuals on the growing organ donor wait lists across the world.

The United Network for Organ Sharing (UNOS) had the number of people in the United States awaiting a kidney transplant at 93,000 in 2010 and, as of now, the two ways that a person can receive a transplant is from a living donor or from a cadaver.  In either of these cases, however, the organ must meet a number of requirements so as not to be rejected by the donee’s body.  Not only must a potential organ donation match the blood type of the recipient, but it must also match a number of antigen types in order to avoid rejection.  Even then, recipients of organ donations have to take anti-rejection drugs for the rest of their lives.  The fabrication of an organ that is perfectly tailored to a recipient’s body would greatly reduce the chances that their immune system would see the organ as a foreign entity and fight it.

Organ fabrication, though, shouldn’t be a hindrance to organ donation at the current moment.  The elimination of organ donation probably won’t occur for quite awhile and there are people in immediate need of life-saving donations for whom organ fabrication is not a possibility.  If you don’t plan on using one of your spare kidneys or will have no need of them in the case that something unfortunate should happen – god forbid – why not consider giving them away? After all, my mom did and she’s been fine without one of her kidneys for some time.