Modified 3D printers developed at Wake Forest Institute for Regenerative Medicine in North Carolina, US, that print human cells in hydrogel-based scaffolds, backed by USD$24m (£15m) from the U.S. Department of Defence, have accomplished the feat of printing miniature human organs to test new vaccines in a lab. The “body on a chip” project replicates human cells to print heart, liver, lung and blood vessel imitating structures. 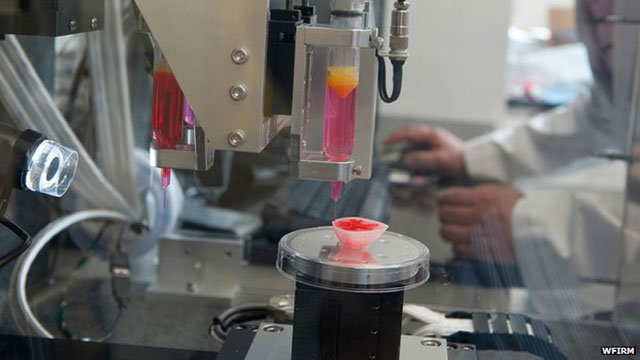 A group of experts from around the US is involved in putting together the technology, which will carry out toxicity testing and identification.

These are the first tests to combine several organs on the same device to model human responses to chemical toxins or biologic agents.

The lab-engineered organs are then placed on a 2in (5cm) chip, linked together with a circulating blood substitute which keeps the cells alive, to then introduce chemical or biologic agents, and potential therapies, into the system. Sensors which measure temperature, oxygen levels, pH and other factors in real-time then feed back information on how the organs react, and interact with each other.

Dr Atala is also the lead investigator on the project,  and said the technology would be used both to: “predict the effects of chemical and biologic agents and to test the effectiveness of potential treatments.”

The US Defence Threat Reduction Agency (DTRA), a division of the US government, which combats nuclear, chemical and biological weapons – three of the four main categories of weapons that are capable of destroying cities, along with cyber attacks – has financed the project as it “would significantly decrease the time and cost needed to develop medical countermeasures” for bio-terrorism attacks, as stated by Dr Clint Florence, acting DTRA Translational Medical Division branch chief of vaccines.