Bioprinting Is Booming and Rainbow Biosciences Wants a Piece

In the whirlwind of news, inventions and ideas spiralling out of the additive manufacturing/3D printing revolution there is one whose potential is so big that the media have actually been a bit reluctant to talk about it: bioprinting (or bioplotting). There has been plenty of  news, relatively speaking, about studies in the field of artificially printed organs for transplant, but it has often been presented as something incredible that will happen, maybe, many years from now. Its potential — eliminating the need for organ donors — is so huge that we just do not want to believe it is possible and within reach, fearing we might be let down when facing reality.

However, the reality, in some regards, is closer than we may have imagined — the bioprinting sector is booming. Or, actually, it has been booming for a while but now it is publicly booming and a company called Rainbow Coral Corp wants to fully maximize its potential. Through its subsidiary, Rainbow Biosciences, it has signed a partnership with another company called Nano3D Biosciences (n3D), to further develop and market n3D’s BiO Assay, the world’s first commercially available 3D bioprinting system designed for high throughput and high-content drug screening. 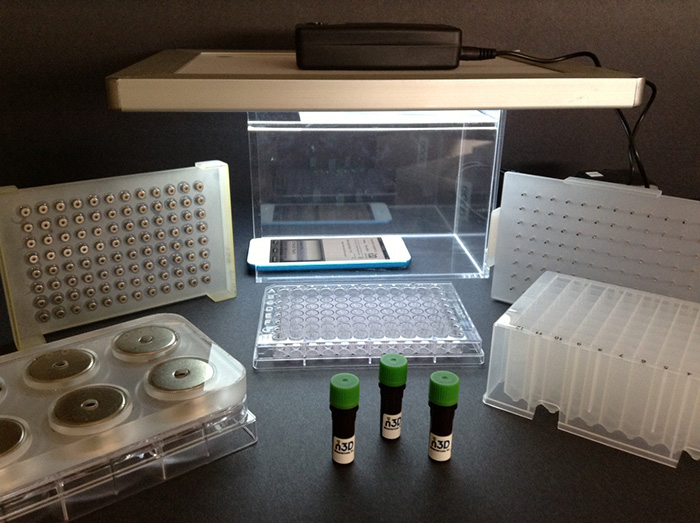 An assay is an analytic procedure in laboratory medicine, pharmacology and environmental/molecular biology for assessing and measuring the presence of a functional activity or target entity (i.e. a drug or biochemical substance) in a cell or tissue. n3D’s BiO Assay is a new type of assay that rapidly prints cells using magnetic 3D bioprinting (if your mind just exploded thinking about the idea of “magnetic 3D bioprinting”, you can watch the video below: after seeing it I did not understand much more about how the process works but it did help me relax) for high-throughput cytotoxicity testing. This system can make a difference in research through in situ data capturing, fast results, automated detection analysis, ease of use, and most importantly, results that predict human in vivo response (and you even get a free iPod Touch).

Bioprinting, as you may imagine, is an extremely complex area. It includes both the 3D printing of biocompatible scaffolding to grow tissues on by using stem cell cultures and the actual 3D printing of tissues using hydrogels (gels made of living cells) through the use of bioplotters. These machines (produced by companies such as Organovo and EnvisionTEC) are actually more similar to a 2D printer, as they print out “sheets” of organic tissue by combining different hydrogels. So far the greatest accomplishments in bioprining have regarded the development of small parts of organic tissues that react to drugs, however full organs are considered to be only a few years away, starting with kidneys, skin and liver. The biggest hurdle to overcome 3D bioprinting is “capilliarization”, that is the “embedding” of capillary networks to carry the blood throughout the organ.

So Rainbow Biosciences wants to get a piece of the bioprinting market, where more than a few quoted companies have seen their stock prices skyrocket in recent years. The most popular in the 3D printing world is probably Organovo, the only public “pure player” in bioprinting, that last year formed a partnership with CAD giant Autodesk to develop software for 3D tissue and organ design. The other big players that Rainbow Biosciences parent company RBCC (which, by the way, was born as a retail fish store and coral growing facility for biological research) is facing are Biogen Idec, Abbott Laboratories and Amgen Inc.