These Heels Were 3D Printed for Walking, and That’s Just What They’ll Do

3D printed high heels, sadly, tend to be novelties that usually look like crosses between dollar store flip-flops and an art student trying to out McQueen McQueen. Yes, there are some designers doing some amazing things with 3d printers and footwear, but a high heel that is truly beautiful and functional has remained, at least in my opinion, elusive. [Ed: We’ll agree to disagree — the joy of a diverse and talented team!]

Enter German shoe design firm Scherf Design who teamed up with Materialise to 3D print a wearable metal high heeled shoe using 3-maticSTL software and its Lightweight Structures module. Their goal was a simple one, print a lightweight, metal high heel shoe that was both wearable and fashionable. The fashionable part wasn’t difficult as Scherf Design has been making striking footwear for almost 20 years, but in order to make the metal heel lightweight enough to be functional they turned to Materialise. 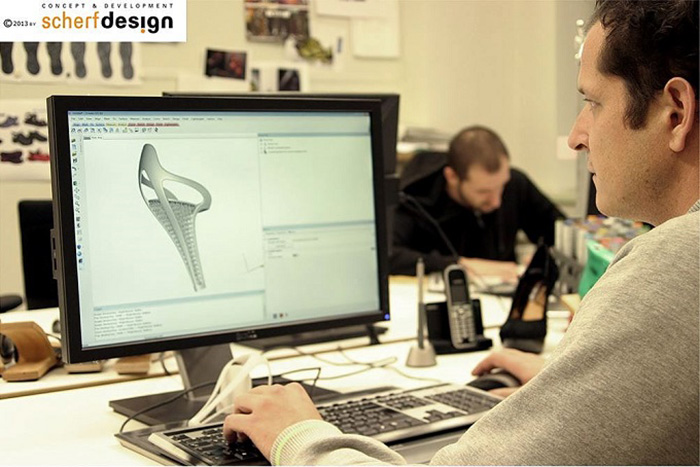 Design is a bit of a passion of mine. I find the artistry of it endlessly fascinating, and I love picking a design apart and wondering what thought processes went into creating it. The actual science of a lot of design is probably beyond me, I’m just not math guy, but I’ve picked up enough to understand that we, meaning people, are not very good at creating lightweight and yet strong support structures. At least not as good as nature seems to be. That’s the whole point of Materialise’s Lightweight Structures Module, it can mimic the organic, sturdy and often-times seemingly random lightweight structures that appear in nature. That made it the perfect tool to help design a wearable and highly functional metal high heel.

Over a period of five months, Scherf designed what most ladies — and a few gentlemen — would call a pretty fierce shoe, and used the 3-maticSTL software to design the metal heel and its internal honeycomb support structure. The body of the shoe was made from traditional materials and the heel itself was printed by metal additive manufacturing company Layerwise.

The results speak for themselves, the shoe is beautiful and the metal heel is both bold and seems oddly restrained despite its complexity. It’s also strong thanks to the structure embedded in the heel itself. Designing a strong honeycomb structure capable of supporting the shoes’ wearer and incorporating it into an odd shape like a high heel is simply not something that would be possible with traditional design software.

According to Materialise Software Project Manager Mariam Mir: “The use of 3-maticSTL software and its Lightweight Structures module clearly highlights the possibilities to inspire designers across a range of industries from leisure and shoe industries to aerospace and automotive, allowing engineers to go beyond today’s design and manufacturing limitations.”

As for the final product, Scherf Design displayed it at EuroMold 2013 and has plans to use the high-tech high heel to market their designs and their design processes to luxury shoe manufacturers. And while the shoe is quite stunning, it isn’t entirely 3D printed, so I’m not sure if it counts. But it certainly is fierce.