Organizations like NASA and the European Space Agency have developed such ambitious additive manufacturing plans as 3D-printed space food, laser sintered moon bases, and printer-mounted robospiders, but will the technology actually work in space? In preparation for sending a 3D printer to the International Space Station next year, space construction agency Made in Space has conducted a critical microgravity[1] trial at NASA’s Johnson Space Center in Houston, Texas and they’ve determined the answer to be a resounding “yes!” 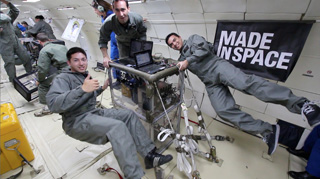 The company, awarded with a NASA Phase 1 SBIR Contract to perform the necessary parabolic and suborbital flight tests for the space agency’s 3D printers in 2011, assessed their proprietary 3D printer with four 2 hour flights of 32 microgravity parabolas (each flight) on a Boeing 727 modified by the Zero-G Corporation. Here’s a brief description from Zero-G’s website about how the process of creating microgravity works:

Before starting a parabola, G-FORCE ONE flies level to the horizon at an altitude of 24,000 feet. The pilot then begins to pull up, gradually increasing the angle of the aircraft to about 45° to the horizon reaching an altitude of 34,000 feet. During this pull-up, passengers will feel the pull of 1.8 Gs. Next the plane is “pushed over” to create the zero gravity segment of the parabola. For the next 20-30 seconds everything in the plane is weightless. Next a gentle pull-out is started which allows the flyers to stabilize on the aircraft floor. This maneuver is repeated 12-15 times, each taking about ten miles of airspace to perform.

As those familiar with the current state of additive manufacturing and 3D printing know, it can take quite awhile to print a complete object.  If each bout of microgravity only lasts about half a minute, it’s difficult to imagine what sorts of results their tests produced, even after 32 repetitions.  But, evidently, the prototype printer demonstrated layer adhesion, resolution and part strength that met NASA’s standards, determining that the machine was ready to move onto the next stage, more environmental tests at NASA’s Marshall Space Flight Center in Huntsville, Alabama. 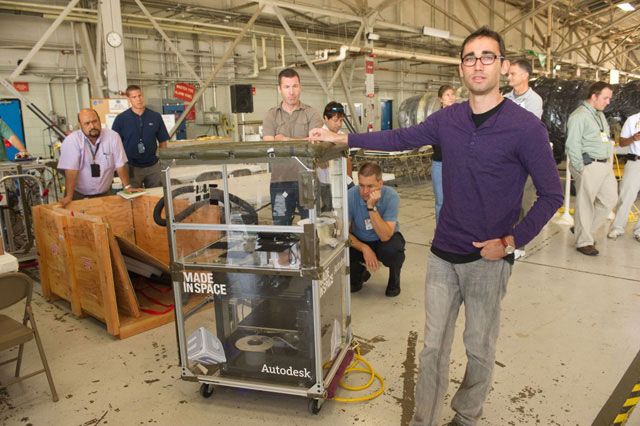 Strategic Officer Mike Chen put forth the following foreshadow: “Today, we demonstrated that our 3D printers can print in microgravity. Next year, we will demonstrate that they can print on the International Space Station.” And Lead Design Engineer and Primary Investigator on the experiment, Mike Snyder, had this to say about the results: “Humanity’s future ultimately depends on our ability to explore and occupy space. The 3D printing technologies developed and tested during our Zero-G flights are a cornerstone to building that future. We reached a milestone in our goal to lay that cornerstone with the success of these prototype tests.”

I’m not sure that the future of our species is entirely dependent on our ability to explore and occupy space, unless Snyder is privy to some knowledge about our fate that I’m not, but it’s definitely some pretty cool news. Buckminster Fuller believed that preparing humans for space travel often led to increased well-being for us humans back on Spaceship Earth.  Because, in space, engineers are forced to design tools and habitats that can do the most amount of work with the least amount of material, we learn how to create more efficient forms of livingry, ultimately learning to use the Universe’s principles to create the least amount of waste. If Bucky was right, one small step for the first 3D printer in space is a giant leap for all 3D printers everywhere.

Source: Made in Space

[1] From Wikipedia: “The term micro-g environment (also µg, often referred to by the term microgravity) is more or less a synonym of weightlessness and zero-G, but indicates that g-forces are not quite zero, just very small.”