3D printing solid objects, like a My Little Pony statue or even a metal racing gear,  is cool and all, but you know what would be really cool?  3D printed electronics!  There are a number of people and companies working towards integrating electronic components into the 3D printing process, but the technology has yet to be perfected.  One company that is among the farthest along is Optomec, which has developed an aerosol jetting process for applying conductive inks to three-dimensional surfaces.  Germany-based Neotech AMT GmbH has taken Optomec’s technique and run with it, eventually inventing their own process for printing electronics, which they are now making available commercially for the first time.

In 2010, Neotech applied the Aerosol Jet Print Engine to its own 5-axis machine and, through a combination of novel hardware and software, was able to 3D print circuitry onto almost any 3D surface. With its process, Neotech was able to print circuitry onto complex shapes for a number of applications, including antennae for mobile devices.  You can see how the printing process works in the video below:

After working with Optomec’s process, the company has modified its 5-axis machinery for a new electronics printing process, called Light Beam Sintering (LBS), which the company is now releasing to the public.  In a press release, Neotech describes the technology as a “non-contact, photonic sintering technique” for applying silver nanoparticles to a given substrate.  LBS, the company explains, is ideal for printing circuitry onto low-temperature materials, like transparent polycarbonate. 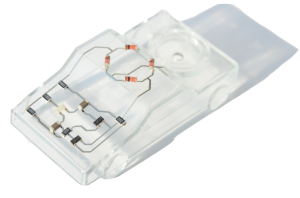 Neotech explains that the light source of their LBS machine, the LBS 45XE, is tuned to the absorption wavelength of the object on which it is printing.  The light beam, then focuses on its printing pathway, where heating and sintering of circuitry is performed without damaging the object itself.  Using 5 axis motion, the LBS 45XE is capable of printing on parts from a few centimeters up to 2m in size.  The resulting circuits are, according to the company “highly conductive with strong adhesive and cohesive strength.”

Managing Director of Neotech, Dr. Martin Hedges, says of the technology, now commercially available, “This platform will assist customers to develop novel 3D Printed Electronics structures on low temperature substrates. The initial target markets are printed antenna for mobile phones and heater patterns for the automotive industry. The LBS 45XE has been designed for mass production with low operating costs. The system will be a very useful complement [to] our current range of 5 axis printing platforms to advance 3D Printed Electronics.“

We’re still awaiting the dream of a completely integrated electronics printing machine that both prints the object and the electronics themselves, but Neotech’s new machine brings us closer to an all-in-one factory.  With the speed that the industry’s been moving, I wouldn’t be surprised if we saw Neotech’s machines, or a similar system, used for such purposes sooner rather than later.