Last week, I wrote about Things3D, a new venture set up by Joe Wee and his partner. The venture is an interesting one but the central issue it poses is that of licensing brands with a 3D printing purpose as a way of protecting and unlocking brand potential in this exciting new world of personalized manufacturing that is hovering on the horizon.

The multi-national toy company, Hasbro, which owns some truly iconic brands, seems to be moving in this direction. Back in February, the company announced a partnership with one of the leading 3D printing companies, 3D Systems.

And now, Hasbro is taking it a step further, and has partnered with Shapeways, which will see the companies working together to “open up its intellectual property to fan designed products using Shapeways 3D printing.” SuperFanArt, will be launched at Comic-Con San Diego 2014, this week and it will allow fans (currently only of My Little Pony) to create, 3D print and sell their own 3D artwork based on the popular Hasbro owned content, under license. According to Shapeways: “The first license is granted to a select number of 3D artists including Brandon Lee Johnson, Paul Philbin, Christophe Vidal, Melinda Rose, and Brian Harris.” 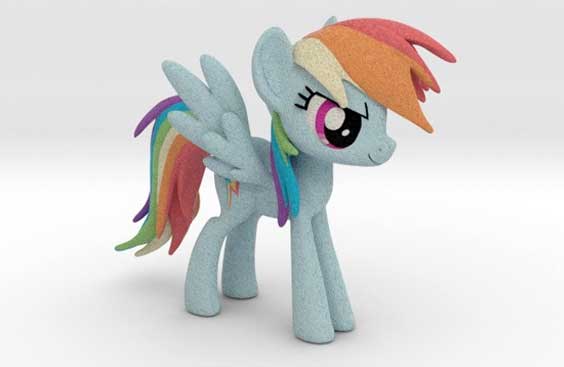 This is the first big company to open up their intellectual property on Shapeways, which allows for the legal creation of branded 3D printed products. Starting with just the My Little Pony brand, the suggestion is this is just the first of many, probably depending on if it goes to plan. That plan is to allow fans around the world to create and sell unique, 3D printed My Little Pony figurines, which is set to expand the range of products available (and mass produced) by Hasbro. According to Shapeways this could potentially include more than 900 ponies that have been identified and named by the fans, many of who belong to the “Brony” community. For the uninitiated, a Brony is a “Bro who likes Ponies.” Go figure — another word combination that somehow just makes it ‘too cool.’

John Frascotti, Chief marketing officer at Hasbro told the New York Times: “We have been investigating 3D printing for quite a while, as have many people. What 3D printing truly empowers is the creation of artwork that maybe wouldn’t make sense for mass production, but it makes sense for a unique item.”

Shapeways’ commentary on the deal is insightful with kudos given to the enlightened approach of Hasbro:

“This is a major step forward in realizing the creative potential of 3D printing, to make products on demand that might otherwise never make it into people’s hands. Hasbro has been incredibly forward thinking and open minded, to realize that the existing unmet demand within their fan base can be satisfied with the help of those very same fans. We expect to see many more partnerships like this, to enable user-generated content to be 3D printed based on existing intellectual property, with fair attribution and compensation for all parties involved. We’ve seen this model work successfully in the digital realm, and we’re thrilled to be leading the charge in the physical.”

Personally, I applaud the progressive approach of Hasbro (and there are a few others) in taking the bull by the horns. Rather than sitting around worrying and bemoaning the approaching IP storm that 3D printing is conjuring, they have started to adjust their business model accordingly. It’s all just toes in the water at this stage, but it is a positive move that could see a justified pay-off.