Two of the giants in the 3D printing software space, with tools designed specifically for 3D printing prep, are Belgium’s Materialise and Autodesk, augmented greatly by its recent acquisition of netfabb.  With such big names dominating the field, it might be difficult to imagine the chance that a small startup would have in providing its own solution for 3D file prep and management; however,  MXD3D’s MakePrintable cloud service for repairing 3D files has become a popular, free solution in the 3D printing community and could just prove to be the David in a Goliath-dominated scene.  Not just due to the intuitive interface and quality of the online software, but because of the brains behind it. 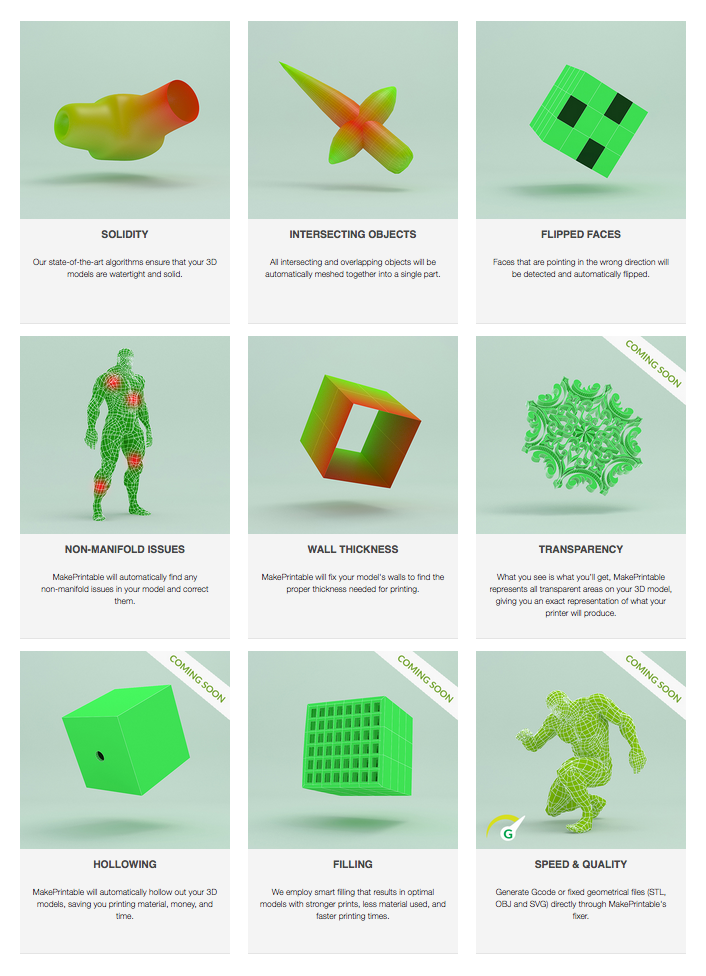 As the startup readied the launch of its Public Beta, today at Inside 3D Printing in Santa Clara, I caught up with the CEO and founder of MXD3D, Muhannad “Mo” Taslaq, who told me about the launch, the partners involved, and what else the company had in store for the future. Though MakePrintable has been in private beta for some time, today’s announcement means that anyone can upload their 3D files to the site to be prepared for 3D printing.  The interface as been designed to be extremely easy to use and, because its in the cloud, users can let the online software do all of the work, without eating up their own computing power.

At first, Mo’s pitch for the product sounds pretty straightforward. “Everyone is talking about new 3D printers and new 3D printing technologies, but there is a huge gap that is happening on the content side of things. There are two main issues: if you are not a designer, mechanical engineer, or someone who knows 3D printing, you won’t be able to design something from scratch,” Taslaq explains. “So, you’ll need to get an existing model. And, even if you can design something, if you want to optimize it for 3D printing, it’s going to take time and effort, given the trials and errors of the 3D printing process.”

Then, he gets into an even larger problem for the fragmented 3D ecosystem. “And the second issue is that there are so many different material types and printer types that you don’t just want to design something for each printer. You want one file that is printable on any printer. And this is where our vision comes in.”

This issue is one that Microsoft has currently established a consortium made up of some of the most powerful players in the industry just to tackle, with their intention to control the 3D printing market through the development of a Microsoft file format called .3MF.  MXD3D, however, is attempting to tackle it by creating a program that can handle any format and convert it into any format. “We want to be the postscript of 3D printing. You upload your design and we have plugins on any design software… and are linking with a number of design marketplaces, so you send you file to MakePrintable, where it repairs the file.  Then, you pick the material you want and the printer that you’ll use to print with, and it creates the file for that process.”

Adobe Photoshop’s latest version makes a similar process.  You can select the 3D printer you own, or service of your choice, and the material you’ll use.  It even generates a preview of what that will look like.  But their process isn’t perfect.  In addition to the amount of memory required to process a file, slowing down the file significantly, the “fixed” file can often be overly repaired, making up for model flaws with extra thick walls that ensure a safe print, but a hideous output.  Not only does MakePrintable perform repairs for non-manifold, flipped faces, boundary edges, intersecting objects and solidity issues, all in the cloud, but it addresses wall thickness, as well, a problem that is not so easily tackled with an automated process.

Mo tells me, “3D printing is still new. This is an open market and, even though there are competitors out there, as a startup, you can show that you can do something new and that is better than something that’s already been out there for awhile.  There are several things that we are better at.  The way we process files, for instance, and even some of the repair issues we can handle better.  Wall thickness is an issue that our competitors have an issue with.” 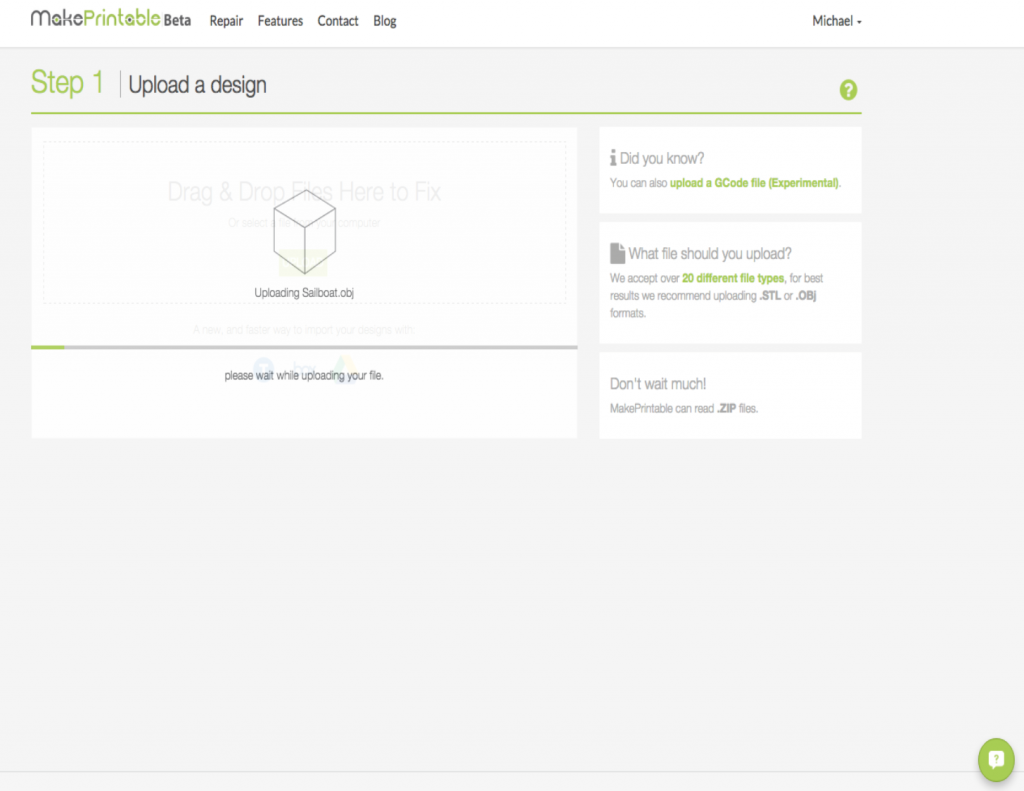 To broaden the access to 3D file repair, they’ve made the process of fixing a file on MakePrintable as easy as one, two, three, literally using a three-step process that involves uploading the design, or importing it from a third-party app, such as Blender or Google Drive, in any one of 25 different formats. 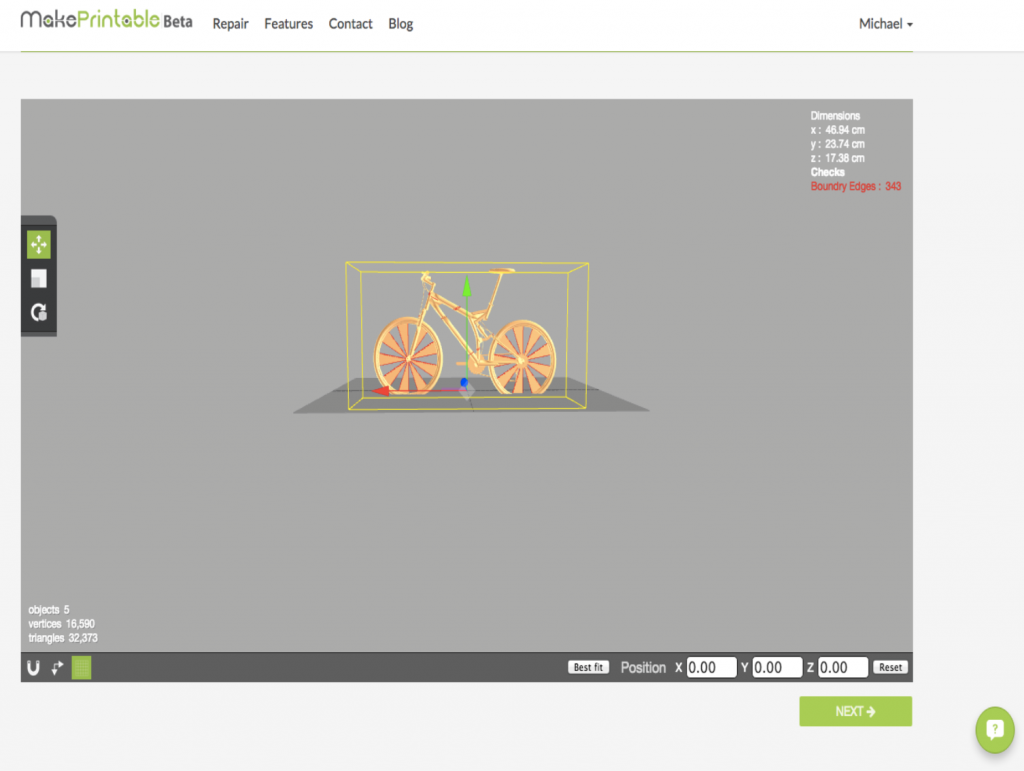 Then, the details of how the object will be printed are specified. An editor incorporated into MakePrintable provides necessary tools for resizing, rotating, translating and more. 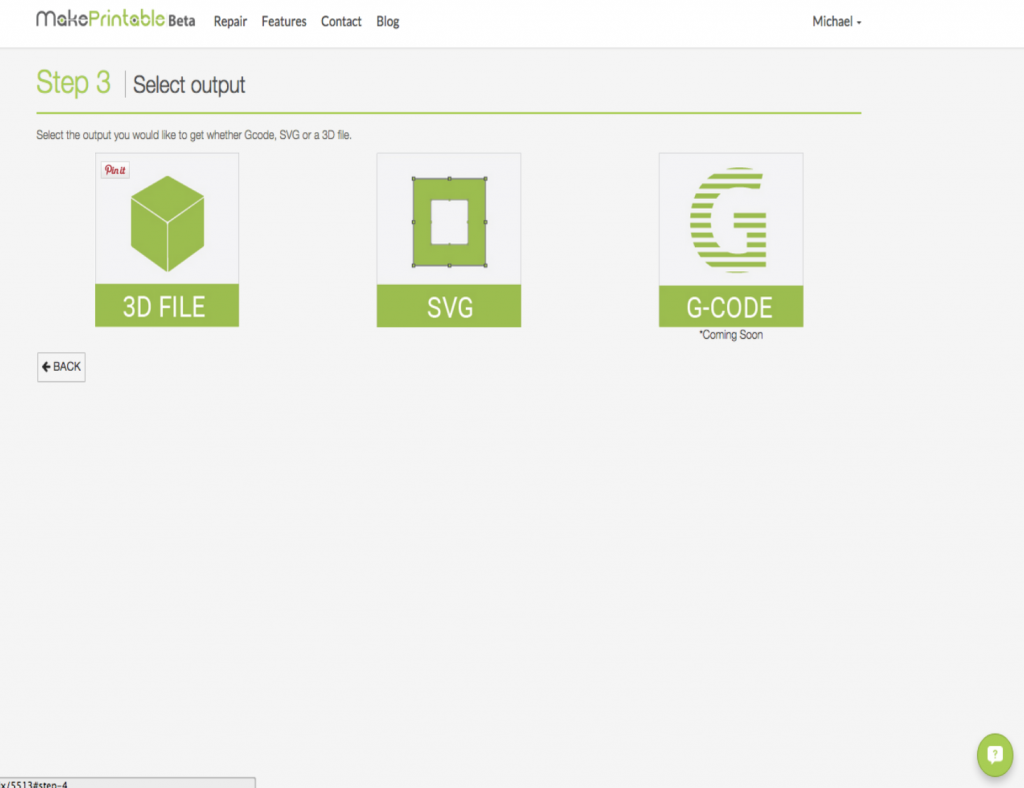 And, finally, you select the output format, which will create a downloadable 3D file, .svg, and, soon, even Gcode.  They’re working on handling textures, as well, so that even colored 3D models can be prepped for 3D printing on a binder-jetting machine. The site does all of the repairing in the cloud so that, when you return later, you can download your fixed file and get printing. 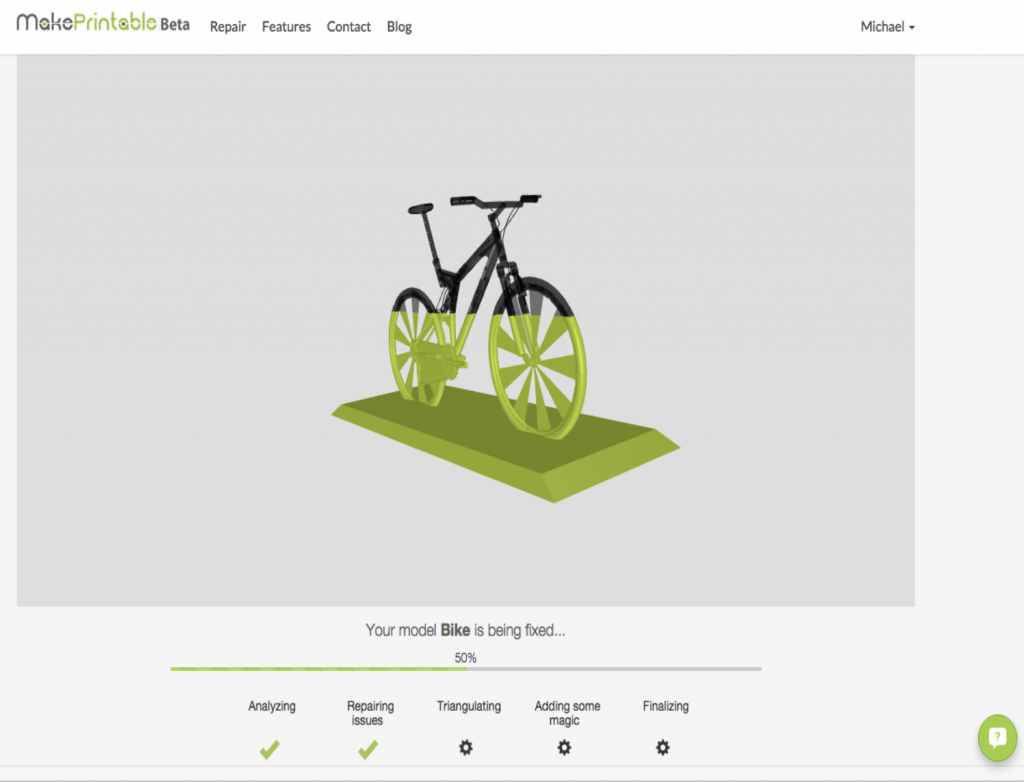 For those concerned about the security of their 3D models – say, a large company with sensitive IP – MakePrintable also has a secure mode for file repair.  Developed in response to beta user concerns, this secure mode encrypts the data being uploaded and download so that not even MakePrintable staff can see the file. “We only see the feedback provided by the user and the .pdf generated by the software about whether the file has been fixed or not,” Mo says.

Based on our own readers’ feedback, MXD3D has already earned a positive reputation in the 3D printing community, but Mo told me that the software has also earned the respect of some pretty big names.  For instance, the long-established DAZ 3D has become a proud user of MakePrintable. Berkley Frei, VP of 3D Printing for the 3D software company commented, “For some time now, DAZ 3D has been looking for a 3D print solution for DAZ Studio creations. However, the geometry in a DAZ 3D character assembly, out of the box, is extremely difficult to make printer friendly. We’ve tried dozens of 3D print cleanup solutions and pipelines but the results have always been unsatisfactory. We have been very impressed with what we’ve seen and tested with MakePrintable and we look forward to following their progress as they enter public beta- we have high hopes for this tool.”

The Public Beta launch already sees MakePrintable integrated with such platforms as Shapeways, Box, and Google Drive, too, with plugins for Blender and Sketchup on the way.  That way, when a file is fixed on MakePrintable, it can be transferred through Box or Google Drive or sent directly for 3D printing on Shapeways.  Though Mo says they are focusing on consumers at the moment with Public Beta launch, this integration with a variety of businesses, modeling programs, and more, gives them an additional leg up on their larger competitors.

“We can also link with anyone,” the CEO explains. “Integrating our API into any marketplace, any 3D printing service, any 3D printing shop, a gaming company, designs software and design tools.  And, we also have the vision that, when you get your 3D printable file, you want it printable on that specific printer.  Not something generic. We think that we’re a strong competitor, when matched against the other companies.  And we’re going to show in the coming few months that we’re even better.”

The real power of MakePrintable became apparent to me when Mo was demonstrating the SketchUp plug-in that they were working on.  To save time, Mo went to SketchUp’s massive 3D Warehouse and downloaded a Mega Man model, which hadn’t been designed in any way for 3D printing.  No concern for strange edges, holes, or support material. After exporting it to MakePrintable, the file was, well, made printable, while the MXD3D CEO continued to tell me about the company. 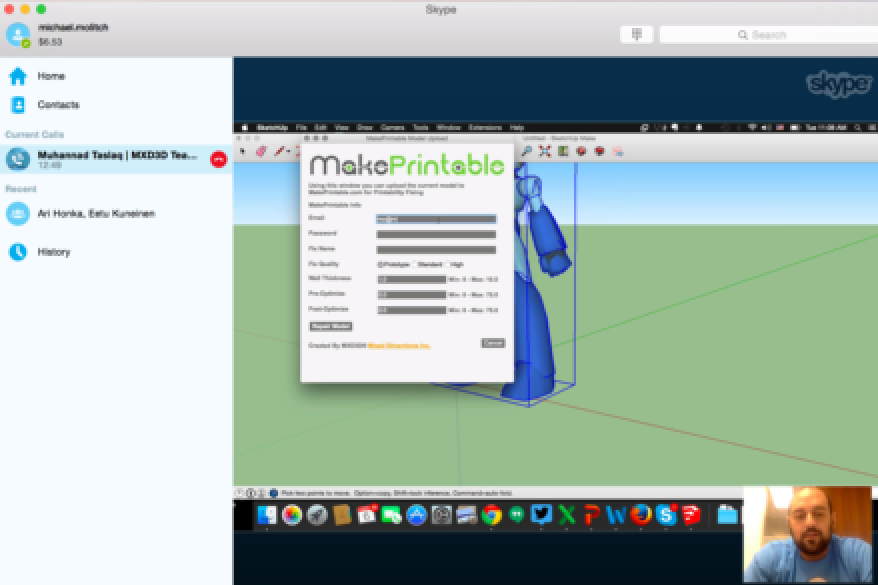 Because 3D modeling has been around independently of 3D printing for so long, with such sites as TurboSquid being used for video games and digital art, there are a vast number of models on the internet that can be downloaded, but not always printed. Using tools like netfabb, or even Autodesk Meshmixer, will allow users to prep files for 3D printing, but the interfaces of both can seem daunting to uninitiated users. But MakePrintable is so easy that converting a 3D model into a 3D printable model is completely painless.

So, with MakePrintable’s API, in development, this means that any number of businesses could potentially embed a MakePrintable function onto their website to convert 3D models into printer-ready files easily.  No longer would Thingiverse or MyMiniFactory need to guarantee that an uploaded model is printable.  Sites like Sketchfab could add the API so that the gaming-focused designers in their community could make the switch to 3D printing easily, if MakePrintable works as well as it seems.

The co-founders of MXD3D describe their vision well in the press release put out today.  Baha Abu Nojaim, CTO and Co-founder, explains, “There are millions of 3D files out there and only a small percentage are printable making it hard to utilize 3D printing and convert digital files into physical objects blocking the potential of the industry. Our strength and value with MakePrintable is that we transform these digital files into a printable form unleashing massive potential in various industries that can utilize 3D printing.”  Mo adds, “We aim with MakePrintable to remove all the headache and hours, if not days, of manual labor needed to bring any 3D object to the physical world.”

From what I learned in my call with Mo, I really do think that MXD3D is capable of doing this and more.  As we shift from a discrete 3D printing industry to a broader reality computing/mixed reality industry, the software and skills of MXD3D will become increasingly necessary.  Scanners will bring physical objects into the digital world at an unprecedented rate and augmented reality headsets, like the Microsoft HoloLens and Canon MREAL, will need tools to translate these files, modified or duplicated, back into the physical world.  In other words, they’ll need something to make them printable.