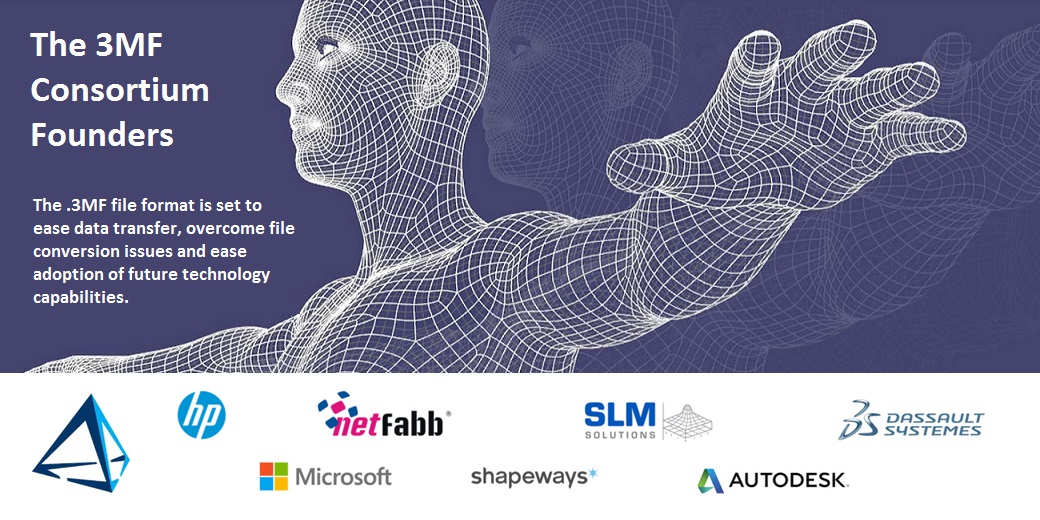 Announced at Microsoft Build this year, the 3MF Consortium seeks to create a new 3D printing file format that address the issues seen with current 3D printing files, like .stl, .obj, and .vrml.  The companies so far brought on are meant to work together to unify the plethora of existing formats into one that can capture all of the information necessary for 3D printing and 3D modeling – such as color and material – while still being translatable across programs.  There is a great conversation about the 3MF format from our awesome readers in the comments section of this article.

Adrian Lannin, 3MF Consortium executive director, announced, “The addition of 3D Systems, Materialise, Siemens PLM Software and Stratasys to our membership ranks further demonstrates the significant industry momentum behind the adoption of 3MF. By participating in the 3MF Consortium, our new members will ensure that their customers get all the advanced capabilities and productivity benefits of the 3MF specification. We welcome them and look forward to their contributions.”

3D Systems and Stratasys are the two leading 3D printer manufacturers in the industry, while Materialise is known for its established 3D printing services and software development, providing significant contributions to the healthcare, automotive, and consumer spaces.  Siemens PLM Software is hoping to add its own software solutions to the space, recently providing assistance to a number of 3D printing start-ups.  Joining the rest of the 3MF Consortium gives the group significant leverage, potentially assuring the dominance of Microsoft’s new file format in the industry.

Fortunately, the open source community is always growing in strength. Just as they were responsible for this current desktop 3D printing revolution and many of the programs that dominate it, it’s possible that they will also be able to stick to their own file formats. Then again, la 3MF Cosa Nostra is a powerful one and, as the tech makes it into the mainstream, we may see mainstream consumers and professionals using .3MF as a default, just as they might .doc and .docx.