One tech-based area that 3D printing technology has helped advance recently is the production of soft robotics. We’ve already seen a team from Harvard create a 3D printed jumping soft robot and even a NinjaFlex-based flower 3D printed using soft robotics as well. Now, there is another intriguing project being undertaken by Cornell University engineers, who have successfully developed a 3D printing method to replicate the function and arrangement of muscles within the tentacle of an octopus. 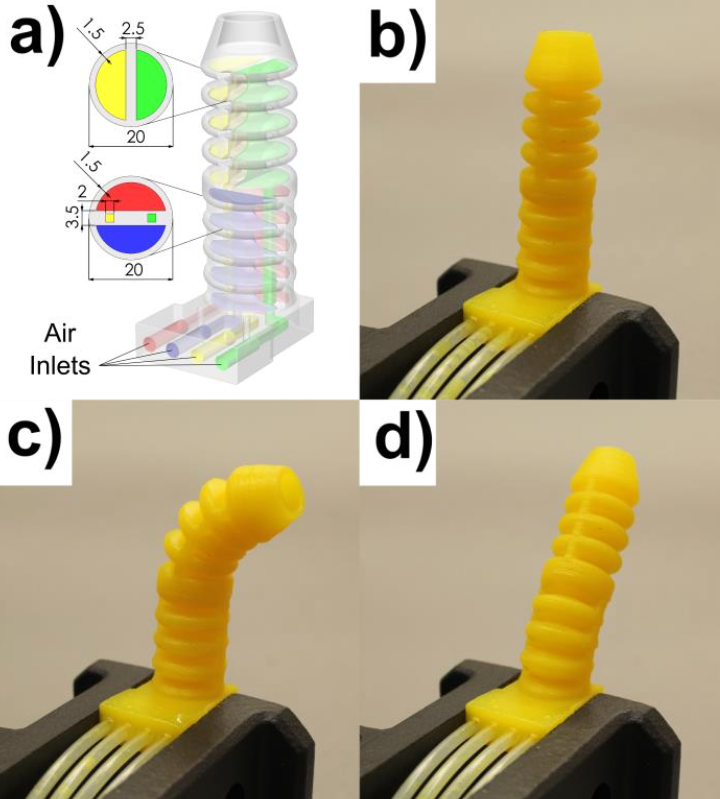 The team worked to develop a elastomeric soft robotic system utilizing 3D printing technology, attempting to develop more advanced and flexible systems like the octopus tentacle, which could lead to an abundance of other potential uses. Thanks to project funding from the Air Force Office of Scientific Research, 3M, and the National Science Foundation, the Cornell University engineering team found success in their soft robotics and 3D printing experimentation.

The octopus, which is, of course, an invertebrate, has a genetic make-up that can only possibly be replicated as a soft robotic device. But, up until this complex project was tackled by Ph.D student Bryan Peele and his team of researchers, there were definite limitations to the ways that 3D printing could manufacture a soft robotic device. The method developed by Cornell University’s engineering team, however, utilized a photopolymerizable elastomeric material that allows for a vast amount of freedom for the 3D printer and the soft actuators that they are producing. The project involves using a digital mask projection stereolithography system to design the soft actuators in the elastomer material, a polymer with high viscosity and flexibility, in order to replicate the form and function of the octopus tentacle muscle to a T.

“Based on the demonstration reported here and the possibilities for improved materials, this nascent printing process for soft actuators is a promising route to sophisticated, biomimetic systems,” said Peele, the lead-author behind the project.

By directly printing the soft robotics into the form of the tentacle muscle, the team was also able to implicate the function and movement of the octopus part into the device, as well. The Cornell engineering team has not only reproduced the inner workings of one of the most complex and mysterious animals underneath the sea, they have also pushed forward the potential uses for 3D printing in the realm of soft robotics. With the success of their 3D printed octopus tentacle, Peele and his team have taken the natural functioning of this sea creature and can now try to apply it to a vast number of advanced robotic projects. The exact details of the report are quite complex and in-depth, but can be purchased here from the IOP Science Journal, if you’d like to take a dive into further details about this soft robotics project.