News broke last month of a Japanese man who was arrested for the possession of five different 3D printed guns. So, although many of us in the United States and the west have already experienced this saga [Ed: and in some cases are sick to death of it], we may yet see the Japanese import play it out again with their own characters and names. As happened with the US version of The Office, Cody Wilson’s name will be changed to Yoshitomo Wilson and Dawn will be changed to Pam. Let’s just hope this one doesn’t jump the shark by having Yoshitomo and Pam get married! 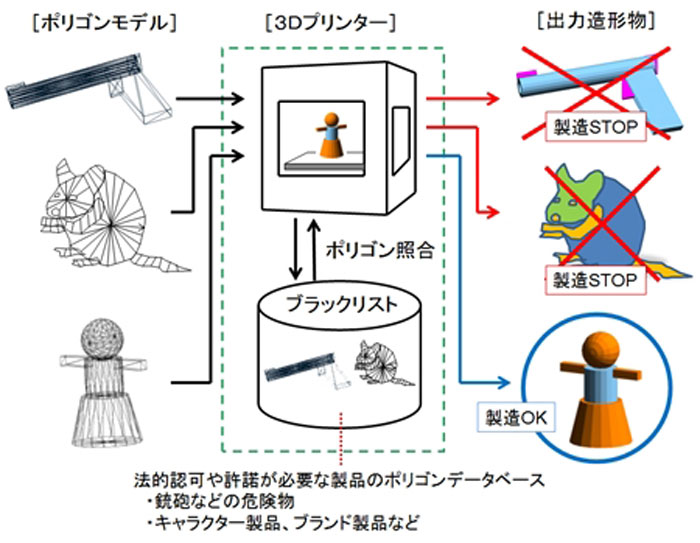 As the story develops in Japan, one company has proposed the development of software to keep illegal things from being 3D printed. Dai Nippon Printing (DNP), a printing company in Japan, wants to form a database of algorithms, patterns and raw 3D data against which .stl files would be compared before downloading and printing. If an .stl file contains some features that resemble patterns in their catalogue – looks a little too much like Mickey Mouse, a Desert Eagle, or, even, specific knives – that file will not be downloaded or fabricated by a 3D printer. Though the company has not released too many specific details about how it would work, the system would be implemented in such a way that it could match 3D data gathered from 3D scanners and CAD/CAM designs against their database. DNP believes that they could get their program running as soon as 2017!!

The system being proposed is not unlike a program still possibly being pursued by the Danish company, Create it REAL. After our first bout of 3D printed gun drama, Create it REAL announced that it could design software that would cause a 3D printing program to shut down if a user tried to 3D print a gun. The software would check an .stl file’s parts against characteristics of a firearm and, if the 3D file resembled closely enough Plato’s ideal form of a “gun”, then the printer would refuse to print it. The difference between Create it REAL and DNP is that DNP is one of Japan’s largest printing companies, so they may develop a more sophisticated, robust system for preventing illegal objects from printing. Moreover, they aren’t just concerned about guns, but blades and IP-protected content, as well.

Such a system, I’m beginning to think, would certainly limit creativity on the part of 3D printer users. I don’t know if anyone should be 3D printing guns, but 3D printing toys that vaguely look like guns is another matter. Suppose I want to 3D print a tiny laser blaster for my bearded dragon and the software doesn’t allow me to do so? How’s Shanté going to defeat intergalactic wormies? And, if the system believes the rat in the above graphic looks too much like Mickey Mouse to be 3D printed, we’re in for some major trouble. Based on that standard, even an open source robot like Intel’s Jimmy would look like it belonged to Disney. However, such tight control over .stl files may be difficult to achieve.

Unless, given DNP’s stature, the company can develop a ubiquitous method for controlling .stl data, the same issues arise with all digital content control. Open source, or individually written, software isn’t likely to be monitored by DNP’s system. The same goes for home-built 3D printers, the type used by the Yoshitomo at the top of this story. Illegal files, too, could be transmitted through illicit channels and torrent sites. But, let’s not rule out the possibility of large companies collaborating with governments to ensure ubiquitous control.

Now that we’ve seen companies attempting to regulate aspects of 3D printing in Japan, we’ll just have to wait for the political side of the 3D printed gun drama to take the stage. Will Japanese politicians use 3D gun printing as a political football to show that they are tough on crime without actually doing anything to enact gun control, as occurred in the US version of the show? Oh wait, the US is the only developed country that eschew public safety in that way.