A Danish company claims to have addressed the concern over 3D-printed guns, not by improving the skills of law enforcement, but by improving the skills of computer software. In a press release, the firm Create it REAL has announced the release of a program that actually recognizes an .stl file as a firearm and, then, prevents it from being printed.

For those who wished to block the printing of firearms, there was the problem of how to go about doing it. It seemed that one couldn’t simply ban the use of 3D printers because the world had already begun to embrace the technology. To ban 3D printing would be to ban a truly transformative technology with the potential for a positive impact on the world. And banning gun files themselves has its own limitations, as evidenced when the Liberator files were removed from Defense Distributed’s own site only to remain in circulation on The Pirate Bay, and other torrent sites.

What Create it REAL came up with is a system that operates in the printing software itself. Their method is similar to that of photo editing programs, like Photoshop, that have the built-in capacity to recognize currency and blocks users from scanning or opening files for forging money.  When a user attempts to open up the .stl for a gun, the file will be checked against a range of characteristics found in a firearm and, if it resembles one, the file will be prevented from opening and printing. This method may hinder users with more sophisticated machines with built-in software from fabricating guns, but I can imagine ways to get around this obstacle for those who are serious about arms manufacturing, such as software cracks or even modifying the parts of the gun themselves so as to elude the company’s program.  Their solution may not be foolproof, but Create it REAL has at least found a way to make gun printing harder. 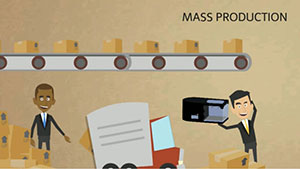 Look into the company a little further and you find something that’s more interesting than the gun prohibition software, though. Aside from researching things like bioprinting and nanoprinting, the company sells 3D printers. But they aren’t selling their own line with their own name on it, they’re selling their own line attached to the logos of other retailers. If someone’s interested in selling 3D printers, they can modify Create it REAL’s Platon FDM 3D printer to meet their specs and sell it under their own brand.  Their sleek website explains the process like this:

So, say you’re RadioShack. You can ask them to increase the size of the model, change out the extruder for something else, and tell them to slap the Shack insignia on it and you’ve got your own line to sell in stores. This is the first time I’ve come across this idea in this market and it has some interesting prospects. I can think of at least one company that could stand to have its logo on a 3D printer. 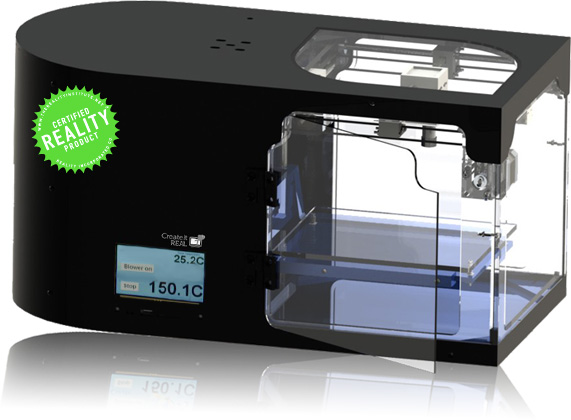