This is a guest post in our series looking at the future of 3D Printing. To celebrate 5 years of reporting on the 3D printing industry, we’ve invited industry leaders and 3D printing experts to give us their perspective and predictions for the next 5 years and insight into trends in additive manufacturing.

Ryan Franks is the founder and CEO of Aether and the inventor of the Aether 1 Bioprinter.

3D Printing the Next 5 Years by Ryan Franks

The human mind thinks linearly. We think about the next 5 years of 3D printing and assume we’ll make a similar amount of progress as the last 5.

But there are other viewpoints. People like Ray Kurzweil believe technology advances exponentially.  They believe advancements over the next 5 years will be far more rapid and dramatic, and they’re right.

Star Trek “Replicator” is coming to the masses

The ultimate dream of 3D printing is to have one machine that can create anything.

That’s the dream Aether is pursuing.We are developing it right now, and an early version is almost ready.

Over the next 5 years 3D printers will go from dumb to smart.

3D printers operate in the blind.  They aren’t automated enough to deliver true print quality or ease of use.

The 3D printers that will finally deliver upon the over-hyped early promise of 3D printing will be equipped with an advanced array of cameras and sensors. Machine vision, AI, laser and sensor technologies will merge with 3D printing.

This will raise ease of use and print quality in an entirely new way, and finally begin to tap into 3D printing’s true potential. People will be able to express themselves creatively in exciting new ways, through both art and invention. New business models that defer the acquisition of short-term profits in favor of a social motivation to advance a revolutionary technology will force the hand of an entire industry.

Everyone will have to innovate more and charge less.

The most advanced future 3D printers will come at a shockingly low price. Those machines will make history, and so will the people who use them.

The future of medical 3D printing

Aether works with some of the world’s most renowned researchers, and the degree to which 3D bioprinting is being integrated into medical research and treatments is incredible.

Most people hear the occasional mention of futuristic 3D printed organs, but don’t hear much else. The true extent to which 3D printing is becoming a part of medicine is the great untold story which will unfold over the next 5 years and beyond.

You’ll see faster and faster progress toward actual implantable tissues and organs. 3D printing medical treatments and research projects will increase exponentially. Some research will progress from medical treatments to bio-enhancements, which could give us “superhuman” abilities, and may even eventually increase our intelligence.

Animal testing will be largely wiped out much faster than people expect. Bioprinted tissue, structures made of human bio-materials, and microfluidic fabricated devices like organ-on-a-chip will replace animal models.

Once we have human-on-a-chip or any true human emulation system, animal testing will be obsolete. The rate of medical discovery will skyrocket when we switch to a far more accurate model than animals.

This will be an ethical victory, it will extend human lifespan, and give us many more active healthy years.

3D printing for prototyping and electronics

Instead of printing parts for prototyping, 3D printers will begin to march towards the capability of printing whole devices with integrated electronics. Technologies like machine vision will allow full PCB printers that incorporate real pick and place devices to place components.

Lower prices and more capable printers will increase the rate of innovation during prototyping, which will speed up the rate of invention and new product releases.

The future of 3D food printing

The right 3D printer will deliver on the extensively pre-hyped phenomenon of food printing.

Current efforts in food printing have fallen short. It’s currently mostly a gimmick, creating very simple single-material, low-resolution structures. It mimics what a chef can make himself by manually dispensing the same foods.

When a 3D printer can create true food art using a wide variety of foods combined into a single design at high-resolution, and make a captivating show out of each piece of food art being created, then you’ll see 3D food printing everywhere. Restaurants, weddings, parties, corporate events, grocery stores, cafeterias and homes

You’ll see custom food art being created on-demand, like statues and portraits of family and guests, or corporate logos.

3D printed and robotic art have been constrained by lack of capabilities. Robotic art printers are usually just a pencil drawing machine that makes low-resolution single-color doodles. True multi-color, multi-material, multi-fabrication-method capabilities will spark a cultural revolution which will give birth to a whole new form of art.

Watching the machine fabricate complex high-resolution designs will be as much of a display of art as the end-product itself. This phenomenon will be one of the most incredible things to watch, and will capture the public imagination.

This will push 3D printers like Aether 1 into classrooms, replacing the current simple FDM machines. 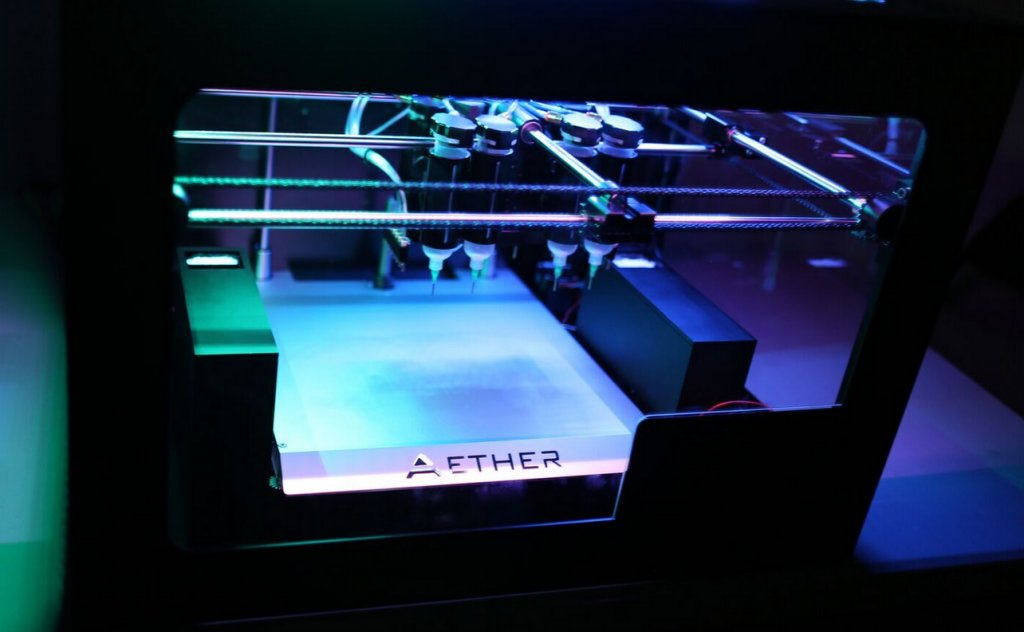 The exponential effect: where do we go beyond the next 5 years?

3D printing will become a critical element of space travel and colonization of Mars.

Beyond that, the exponentially approaching future of technology is unknowable, but it’s ours to create.

This is a guest post in our series looking at the future of 3D Printing, if you’d like to participate in this series then contact us for more information. For more insights into the 3D printing industry, sign up to our newsletter and follow our active social media channels.

Don’t forget that you can vote now in the 1st annual 3D Printing Industry Awards.

The Future of 3D Printing

The future of 3D printing is a series of thought leadership articles written by additive manufacturing experts and 3D printing industry insiders. For more information about participating in the series please contact [email protected]