In preparation for the international release of the new da Vinci Jr. 3D printer, I had a chance to get my hands on XYZprinting‘s most affordable desktop fabricator to see if it might live up to its appeal. The da Vinci Jr., just launched today at a price of $349, boasts the following specs:

So, was this plug-n-play 3D printer really going to be as user-friendly and trouble-free as it promised, with a low price tag to boot? I had my fingers crossed that it would be because, if so, this would mean that, with $349, anyone could purchase a fun and friendly 3D printer for their home or office. 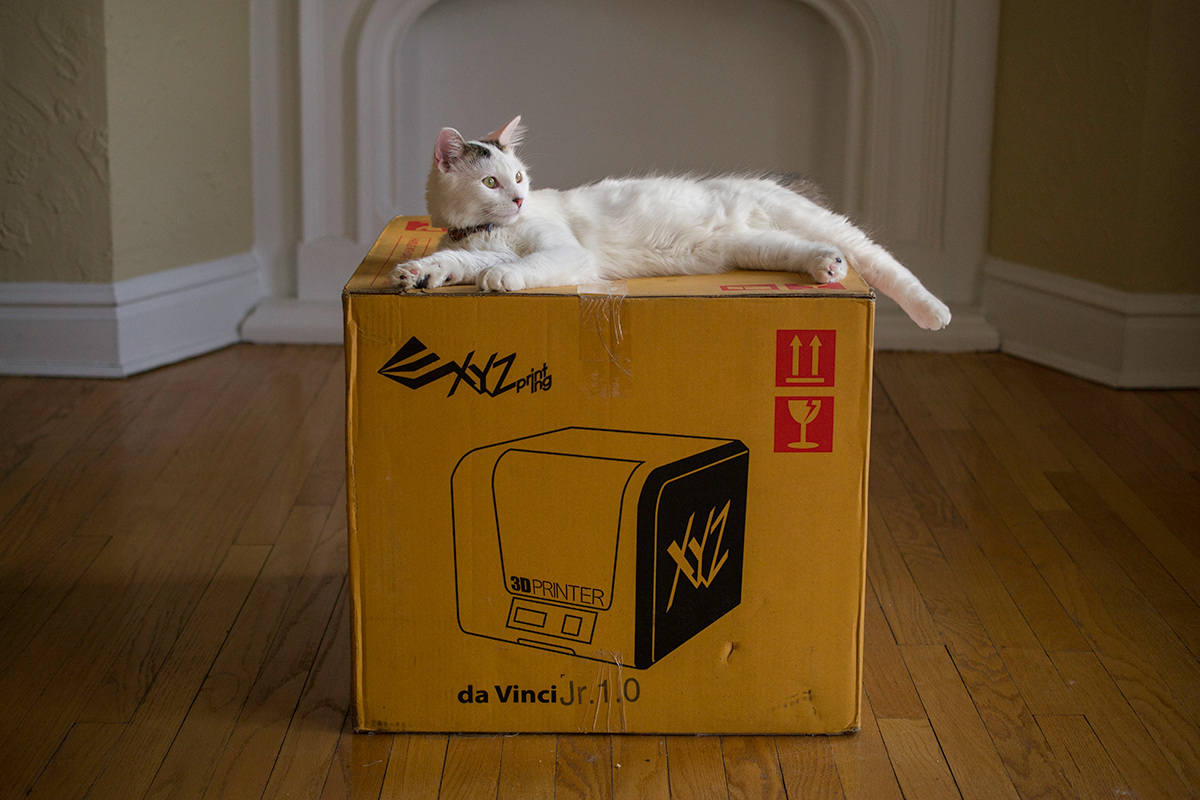 Unlike my RepRap, this machine came to my apartment as a completely assembled unit, packed neatly with all of the pieces that I’d need to install to get things up and running.  These pieces included: the filament feed tube, the power supply, the SD card, and a roll of PLA, complete with RFID chip. XYZprinting also supplies a pack of conveniently-sized pieces of painter’s tape that can be applied to the printbed all at once, without the need for laying out piece after piece to cover the whole bed. 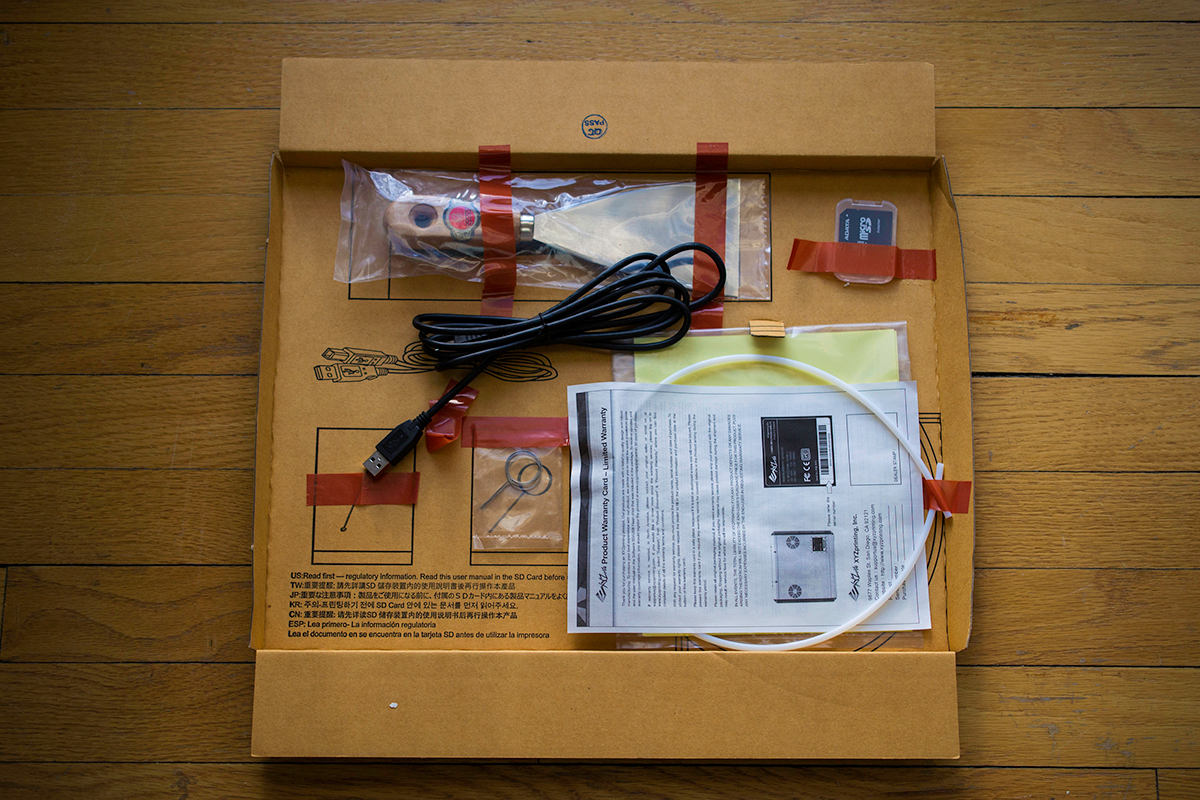 After removing the Styrofoam and cardboard, meant to keep the hardware from shaking around during shipment, it was simply a matter of plugging it in and turning it on.  With the interior light, I was able to get a glimpse at all of the parts within the printer: the LCM screen, with built-in SD card reader; the Fenner Precision timing belts; a glass printbed; a cooling fan, as well as an exhaust fan for the enclosed print chamber; and a spool holder, with built-in RFID chip reader.

I followed the printer’s instructions, downloading the XYZware software from their site. It’s just as easy to launch the software from the SD card provided, but it wasn’t until after having the printer for a week that I realized my Macbook Pro had a built-in SD slot.  I registered the printer online and updated the Jr.’s firmware via a new software package on the site. 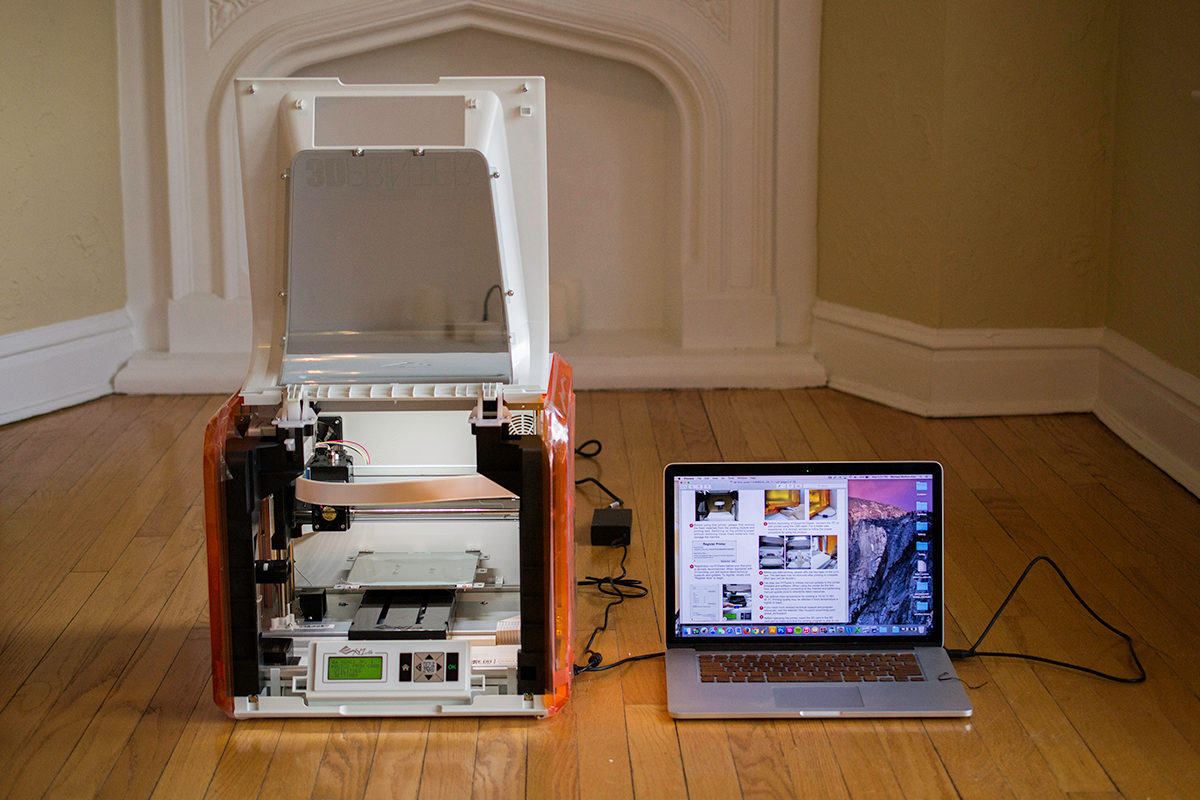 Then, I slid the provided “Nature”-colored PLA into the obvious filament opening, marked for convenience, and placed the roll onto the spool, built into the printer’s enclosed chamber.  Selecting “Utilities”, then “Load Filament” on the LCM screen, and sliding the filament up its feed tube, the printer gladly accepted the filament and began heating the extruder until trails of wispy Nature came streaming out. 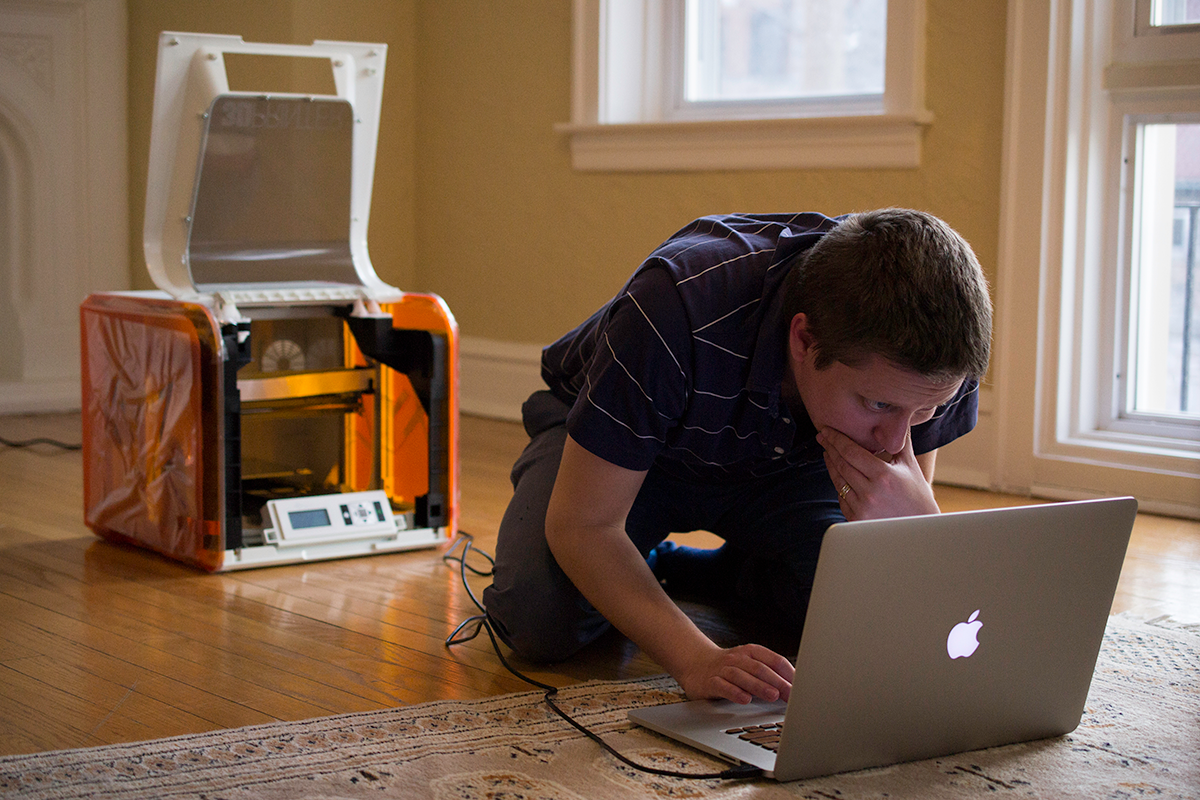 At this point, I had not experienced a single bit of difficulty; however, as soon I began to 3D print the Jr.’s sample model, pre-loaded onto the SD card, I ran into an error related to the X-axis.  So, I flipped the printer off and let it rest, while I tried to find the answer.  During the time that it took to look up the error code in the manual and then turn to the XYZ website for the solution, a magical group of 3D printing fairies flew into the Jr. and fixed the mysterious problem so that, once I returned the machine, everything was actually working properly again! I clicked “Print From Card”, selected the sample model, and hit print. In no time, a perfectly formed vase was sitting on the print bed.

Seeing the print, my wife said, “That looks a million times better than anything printed with your [RepRap].” She was right.  It was then that I thought that my relationship with the Jr. could evolve into a beautiful friendship.  So, I uploaded an .stl of legendary rock icon Sir Paul McCartney into XYZware, dragged it into place, and began printing from my computer. 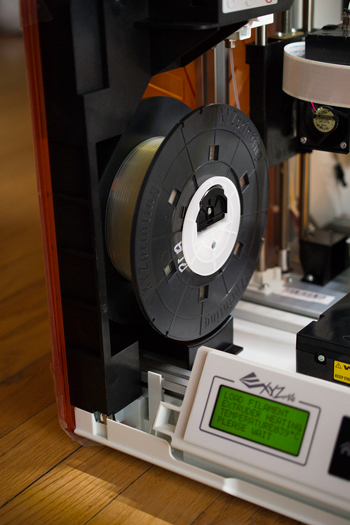 The issue with my Mac is that, if I don’t change the energy display settings, then, when my computer goes to sleep, it shuts down all operations taking place, whether it be downloading a torrent, uploading a file to Shapeways, or 3D printing an object.  As a result, the printer shut down as soon as my laptop began to doze off, fifteen minutes after printing had begun.  Instead of seeing my favorite Beatle greeting me, when I came home to the printer that night, I saw a pair of dismembered legs, fused by a stream of filament to the printhead.  I pressed “OK” on the printer, out of some dumb habit, and the Jr. began trying to drag Sir Paul’s legs around, stuck to the printbed.  It may have been this mistake that caused my subsequent issues with my boy, Jr. 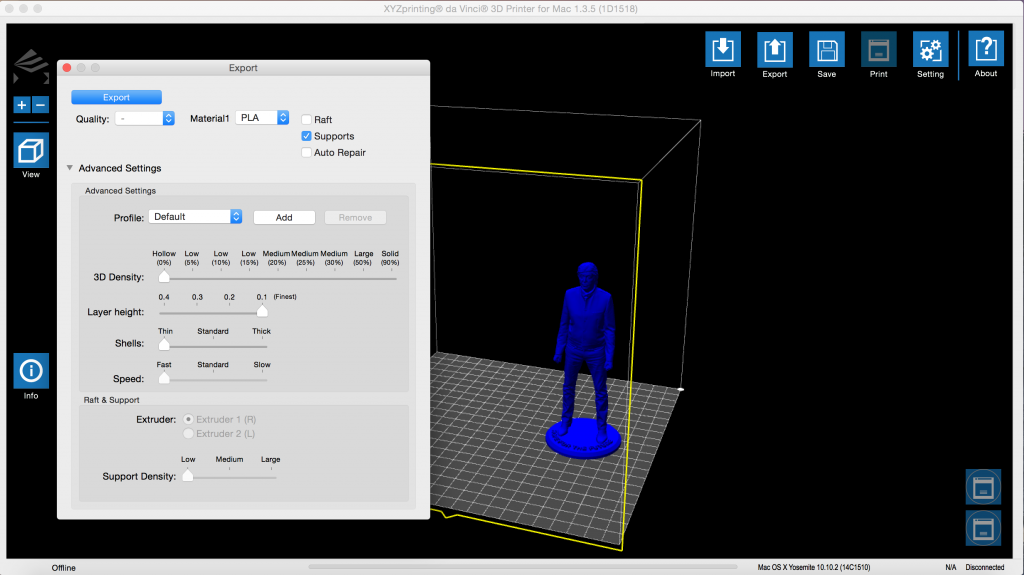 As advised by Charles: with a torx screwdriver, I took the spool holder out of the printer and saw that the chip reader had become disconnected from the printer.  I simply plugged it back into the printer’s electronics, an easy thing to spot, and the Jr. was up and running again.  I then set it to work printing Paul, using the slowest and most highly-detailed settings.  XYZware is a cinch, allowing for both simple settings for novice users and advanced settings for those who would like to alter the speed, support, and density of their prints.  Slicing it with my desired settings, I exported Paul directly to the SD card provided me by XYZ.  This time around, there’d be no issues from Apple, as Jr. could print all by himself.  A real son of DaVinci! 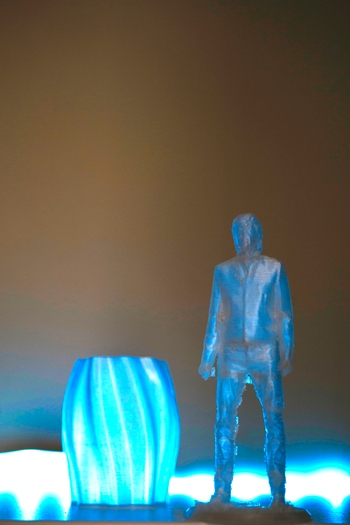 Yesterday morning, I woke up to “Find [Him] Standing There”.  Even before removing the support structures, I could tell that it was a beautiful print.  I’d previously gotten my RepRap to work at its finest settings possible, but could never manage to get prints this smooth.  The da Vinci Jr. can achieve layer thicknesses as fine as 100 microns, so  the layers were almost invisible and there was absolutely no curling.  All I’d need to make the print perfect is some finishing tools.  Without the recently launched Retouch3D, I’ll have to use sand paper and a file.

At the moment, the Jr. is merrily printing a space helmet for our cat, Andre, while I’m thinking to myself how, after a few headaches caused by moi, using the da Vinci Jr. was an extremely pleasant experience. Here is a breakdown of the potential pros and cons of the machine:

Really, I do think the da Vinci Jr. is more or less a plug-n-play machine. The Jr. is pre-calibrated, so bed leveling is not necessary, but, if you do need to calibrate the bed, the Jr. does so more or less automatically.  Manually adjusting the extruder height, however, may be necessary, if something gets bumped during shipment. Otherwise, you can just hook it up and start printing.  It may not have the same hackability as a RepRap and, thus, the ability to use exotic filaments or specialty extruders, but as an appliance for consumers, it delivers on its promises and more.  With such a low pricetag, I am seriously considering buying one for my nieces and nephew as a group present because I think that they could start printing with it almost immediately.  Moreover, the print quality is much more than you’d expect for something so affordable.  As far as I know, 100 microns is the finest on the market for an FFF 3D printer.

For the price, however, you don’t get some features that have become pretty standard with newer 3D printers, like a heated bed and Wi-Fi.  So far, I’ve been happy enough printing in biodegradable PLA and, with an SD card, untethered printing has been great.  Andre’s helmet has been printing for 24 hours straight with no issues! If you would like to print with ABS from the cloud, XYZprinting does offer those options in the da Vinci Plus, as well as a dual extruder model and the da Vinci AiO all-in-one 3D printer and scanner. I might like to use the da Vinci Duo to 3D print with multiple colors and a heated bed, which would cost me $649.  A pretty great price, compared to other printers on the market. 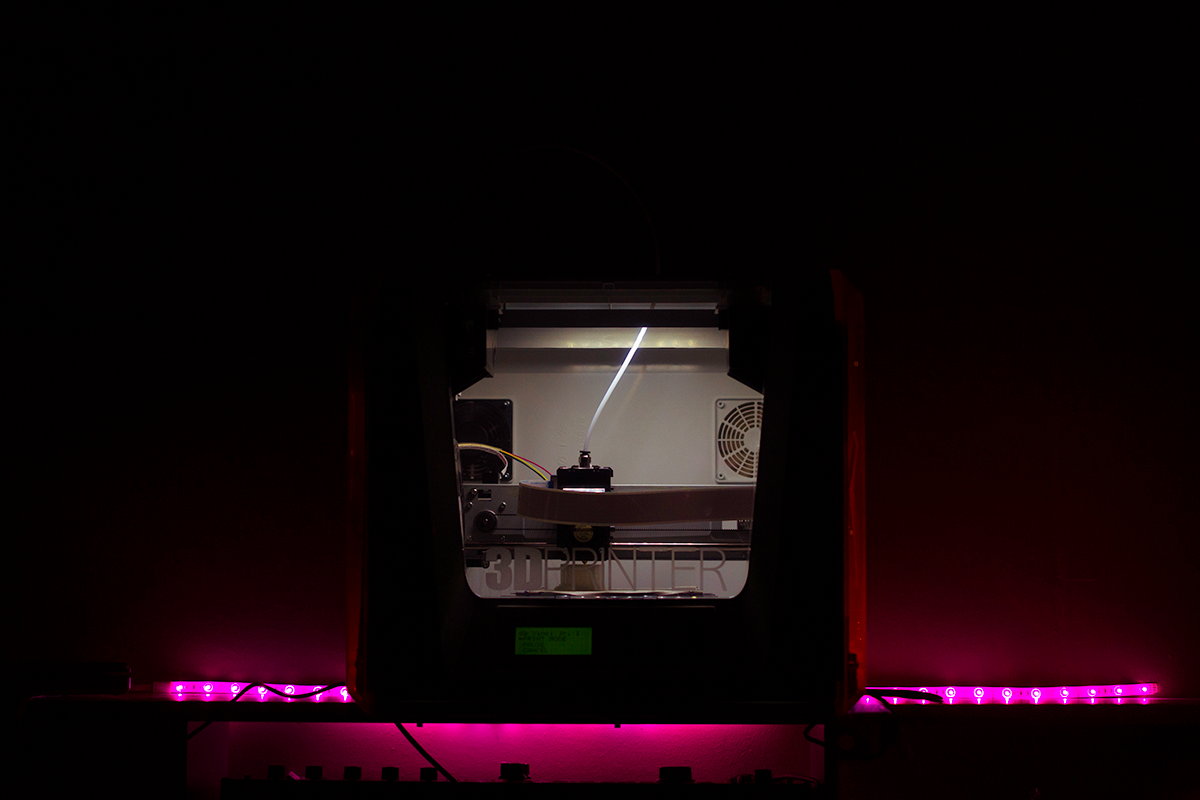 It’s worth noting that XYZprinting wants users to print with their proprietary materials.  In a great interview, 3DPI’s Park Hyeong Yeol asked Simon Shen, the CEO of XYZprinting parent company New Kinpo Group, why they chose this model. To which Shen gave the following answer:

I know that some people disagreed with our proprietary filament policy, but we still believe that this kind of proprietary cartridge policy is important. The reason is quite simple: You have the software, the firmware, machines, temperature controls, and materials. These are all different factors, any one of which can cause a loss of print quality. If a user has a problem with print quality, they only complain to us, the hardware manufacturer. So, if they use someone else’s filament or resin, the responsibility for the problem becomes quite vague. Everyone in the supply chain points a finger at someone else. At XYZprinting, we take the full responsibility in that we at least ask customers to use the right kind of filaments. If you check the other brand names in the US, they have open source filaments. When problems happen, some blame the filament, some blame the machines or software. Users are stuck in the middle. So, to make sure that our customers have a good printing experience, we thought, in the very beginning, that we need to provide, not just the machine, but the software, filament, and resin so that we can take full responsibility. Many customers are not professional Makers. They cannot solve all of the technical problems by themselves, so we felt we needed to take care of everything.

Reading this, I did understand, to some extent why the company would choose this approach.  There are, of course, ways around proprietary filaments, as seen with the 3D Systems Cube, but, when it comes to consumer-friendly printers, not meant for hacking, using off-brand filaments may actually cause problems.  When I reviewed the BEETHEFIRST 3D printer, I tried to print with my own materials and jammed the printer beyond usability.  Of course, with open source, hackable machines, the solutions to such problems can be found on the web, but dismantling the entire printer is not necessarily something that ordinary consumers would want to deal with. 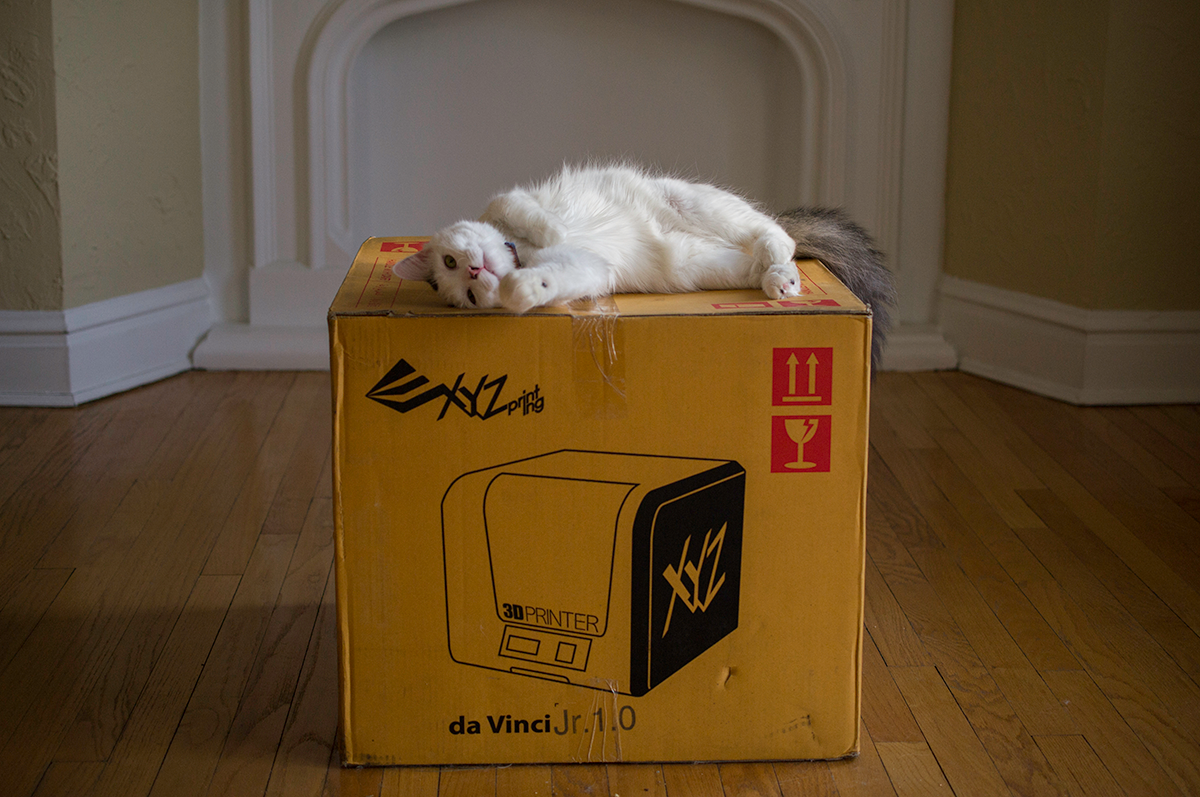 All in all, the da Vinci Jr. was a really great printer with an unbelievable price tag and even more unbelievable prints. For consumers looking for a no-hassle machine, without all of the fun upgrades, this is a great buy.  Definitely perfect for novice users whose laptops won’t power down the print job mid-McCartney. And, here’s a soundbite: “Great for those looking to get into 3D printing for the first time!”

All photos by Danielle Matich of Volim Photography.