XYZprinting, the company behind the low-cost da Vinci 3D printer has just upgraded their desktop fabricator with the much awaited 3D scanner, yielding the da Vinci 1.0 AiO (all-in-one) 3D printer and scanner. Though it may not be the first combination 3D printer and scanner on the market, if you include Zeus from AIO Robotics, which launched on Kickstarter last year, the da Vinci AiO is much more affordable at $799, compared to Zeus’s $2.5k price tag. 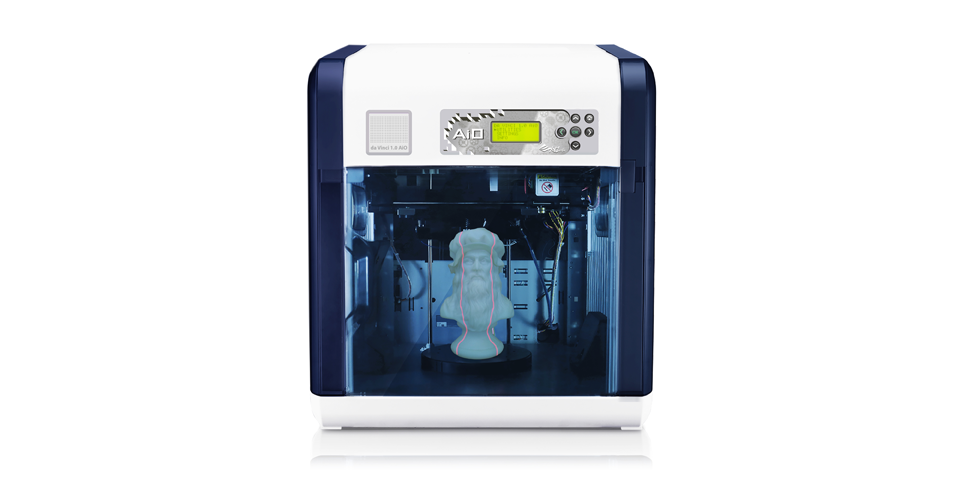 In addition to the former da Vinci’s 7.8’’x7.8’’x7.8’’ build size and access to the company’s open source cloud database, the da Vinci AiO will feature a built-in 3D scanner capable of creating a .5 mm resolution scan in five minutes.  The machine uses diagonally placed laser sensors in conjunction with a turntable to scan an object in its build area, filling in voids with matching curves and texture to create a comprehensive scan.  A 3D scan preview gives users the ability to verify options before scanning and, upon a scan’s completion, objects can be instantly saved. The 1.0 in the name indicates that the AiO will only have one print head, so you’ll have to choose between 3D scanning, with the AiO, or a second filament extruder, with the 2.0 Duo, if you’re planning on an upgraded da Vinci.

CEO of XYZprinting, Simon Shen, said of the new product, “With 3D printing continuing to gain traction across a variety of markets, including education, design, fashion, medical and automotive, the possibilities are just beginning to be realized. The Da Vinci 1.0 AiO was designed with quality and affordability in mind, to enable the continued discovery of applications and usages for 3D printing.”

The da Vinci 1.0 AiO can now be bought through Amazon and New Egg, and, later, through Micro Center and Studica.  If you’re interested in a partial review and unboxing of the da Vinci 1.0, read Oliver Fueckert’s post on 3DPI here.