Cube 3D Free: Frees You from Cartridges, Is Anything But Free 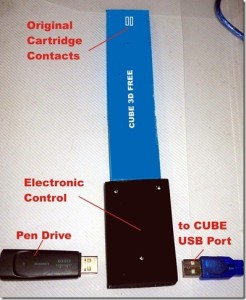 We received a somewhat suspicious email the other day. It promised a way to save money using Cube 3D and Cube X desktop 3D printers. When I visited the Brazilian website, my suspicion didn’t go away. The idea seemed plausible, but with no real detailed descriptions or instructions, only a series of pictures with flagrant red arrows, it’s hard to know what to make of Cube 3D Free.

The thing that irks me about Cube 3D Printers is their reliance on filament cartridges. After having been enslaved to exorbitantly priced inkjet cartridges for 2D printers for so long, I would assume that consumers are outraged at the Cube using the same model. Cube 3D Free is supposedly a method for bypassing these cartridges to supply your own filament. As Roberto tells us, “The original cartridges costs more than USD 150,00 per Kg, and you can buy on the net reels of filaments with price as low as USD 13,00 per Kg. Great !!!” 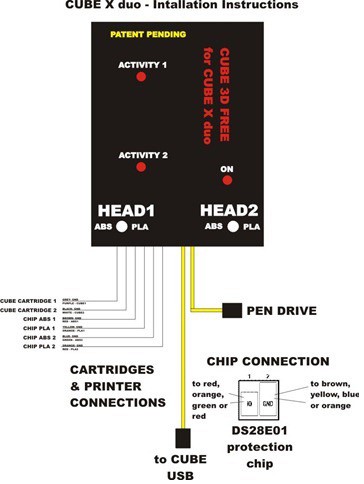 I’ve emailed Roberto for more information about how the device works. Until then, we’ll have to decipher the photos he sent us. It looks as though he’s taken the 1-wire chip from the original Cube cartridge and inserted it into a device that plugs into the printer, telling the printer’s software that a cartridge is in use. I’m not super tech savvy, so I can’t tell how the device itself works, but I’m a bit worried that the box doesn’t do anything at all. Any comments from the gallery would be appreciated.

The whole thing costs a small chunk of change, ranging from $239 to $956, depending on the Cube model you’re using. I’m assuming that because “Using this device they will save at least USD 2,30 per printing hour, nice !!!”, the mechanism is meant to pay for itself. Though I appreciate the sentiment of anyone trying to stick it to The Man I don’t know how much 3D Systems would appreciate it.  Moreover, and unfortunately for Roberto, I found a hack on Hack-A-Day that bypasses the Cube’s cartridge system for free. If it’s possible to do so without a strange, black box with blinking lights, it’s possible that Roberto’s patent-pending device is really just a means of selling the Brooklyn Bridge to out-of-towners in the 21st Century.

The Internet has allowed us to share information with one another so quickly and easily that the proliferation of hacks to get around such corporate roadblocks as the filament cartridge seems inevitable. As consumers become prosumers, the open-source model of Android will most likely win over the closed-source model of the iPhone.  Makerbot, after going closed-source, has continued to learn from the 3D printing community, upgrading their extruders with a design from “Thingiverse users Dr. Henry P. Thomas (whpthomas), Emmett Lalish (emmett), and Deezmaker’s Rich Cameron (whosawhatsis).” If 3D Systems wants to keep up with the times, they’d do better learning from the community and freeing their filament before a competitor steps in with a more prosumer-friendly device.